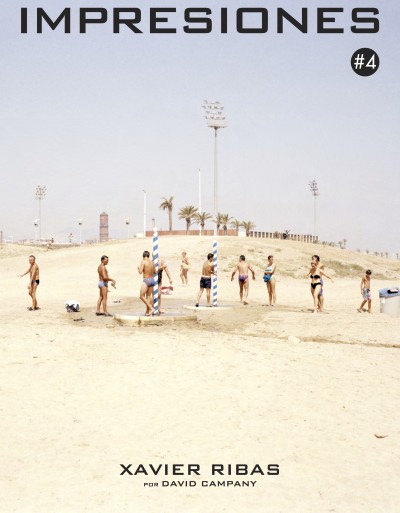 Xavier Ribas’ series Sundays (1994-1997) began as a response to the corporate image projected by the city of Barcelona around the time of the 1992 Olympics. That image was not just a matter of ‘official photography and television’. Significant parts of the fabric of city had been remodelled.  Ribas opens his series with a quiet and understated image of the car park next to the then-new velodrome. We see a few cars and a few people. A woman sitting in a fold–up chair appears to be talking to another woman several meters away. The communication is distant and of course we can’t hear it. Nothing particularly ‘Olympic’ here, but the space is being used by what might be members of the local community. As the series unfolds it becomes clear that Ribas is interested in the way human behaviour cannot be entirely determined by the formula of town planners and the desires real estate companies. Like weeds that sprout up through concrete, people will always find their own ways to inhabit such places and express their need for community.

Sundays was the first major project completed by Ribas after graduation from the Documentary Photography course at Newport, Wales. In his studies he had come to know the work of British photographers of the social landscape such as John Davies and the new colour journalism typified by the work of Martin Parr. He also knew the photography of American colourists such as Stephen Shore and Joel Sternfeld. Ribas was beginning to filter all these influences through his interest in what we might call the social anthropology of landscape.

Ribas had grown up on the outskirts of Barcelona in the kind of space he was photographing here. He knew its patterns, he knew its vague protocols and like most modern adolescents he enjoyed the pleasures of semi-regulated space. In fact there are close parallels between adolescence, such non-spaces and Sundays. Each is marginal and transitory, not quite integrated, suspended awkwardly between what was and what is to come, but also reflective and contemplative.

Whenever the countryside becomes as legislated and regulated as the city centre, it is the in-between space that may seem if not lawless then at least informal. Urban planning is looser, the ground may be unkempt. The land is owned but is sometimes left open and undesignated. These spaces are neither urban nor rural, where work and leisure overlap. High-rise blocks are thrown up for the workers, marginalizing them further, but they prompt them to become pioneers of new forms of landscape.

If you drive the Spanish coast, from the border with France right down to the Costa del Sol, you will find that these kinds of spaces predominate. Scrubland, dotted with signs of human presence and commerce. The barest infrastructure sketches out the template for future development. In fact there is more of this ‘in between land’ or ‘edge land’ than anything else.  Slowly but surely it is being developed, when the economy permits.

There is a long an important history of the photographer as contemplative denizen of the urban hinterland. The lone wanderer as critic-poet, making pictures and assembling inventories of areas that are used but perhaps not loved. This history really begins with Eugène Atget’s fascination with the edges of turn of the century Paris – a land of rag pickers, improvised homes and marginal people. In these spaces we can see the sights and symptoms of modern alienation but in their ignored and unpoliced vacancy these spaces are also utopian. A city that has no such space is almost by definition totalitarian.  In 2010 the Canadian photographer Jeff Wall remarked:

I’d like to see certain places remain as they are or, better, as they were when I first encountered them. Alleyways or open, unused or neglected spaces in the city of Vancouver (or any city), spaces that weren’t useful for whatever reason and got left in an in-between state – between nature and dereliction – and which I have always somehow associated with freedom. But they can’t stay the same and they haven’t; they’ve been built over now and built over with things I can’t associate with the happiness I’m looking for.

As real estate becomes ever more efficiently managed and commodified, the gaps between things get smaller and smaller. And as they disappear so does the promise of another way of living. I think Ribas would agree with Wall.

The happiness achieved by the photographer in such spaces (and by extension the viewer of such photographs), is always provisional, often politically charged and inevitably bittersweet. In the years since Xavier Ribas photographed Sundays many of these places have changed and will continue to change. Sundays may have begun as commentary, an intervention even. Now it is a valuable record.