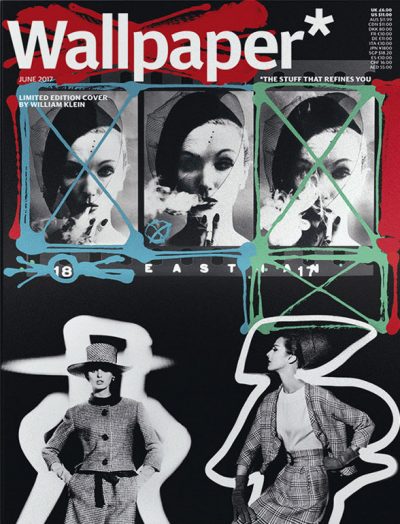 Now almost 90 and still working, William Klein is one of the giants of 20th-century photography. His work includes gritty street shots such those collected in his first book Life is Good & Good for You in New York 1956, groundbreaking fashion images for Vogue, documentary and fiction films such as Muhammad Ali, The Greatest and Who Are You, Polly Maggoo?, as well as abstract painting. In all cases, Klein’s graphic punch and sassy wit are instantly recognisable. At Photo London at Somerset House, 18-21 May, he will present two new 9m photographic murals.

DC: William, where did it all begin?
WK: I was born in Harlem, New York, in 1928. I loved art and hung out at the Museum of Modern Art. It showed painting and sculpture, but also photography, graphic design and movies. It was like a second home to me. I wanted to get to Europe, to be a painter. I was in Paris by 1947, studying in the studio of Fernand Léger. He thought young artists should look beyond the gallery – to architecture, the street, new media. I went pretty quickly from figurative painting to abstract murals. Then a Milanese architect asked me to turn a mural into a room divider made of rotating panels. With my wife, Jeanne, I was photographing these panels and, in the camera’s long exposure, the rotations blurred, creating new forms. That was kind of interesting. So I went into my darkroom and made abstract photos, with light shining through shapes cut in pieces of card, moving them around to produce patterns on the paper.

That’s a quick hopscotch! This moving between media is reminiscent of the Bauhaus.
The Bauhaus approach really impressed me. Having no rules, experimenting – that was how I felt. I wanted the freedom to explore what was possible. I had a few shows of those abstracts and, in a 1954 exhibition in Paris, they were seen by Alex Liberman, the art director at US Vogue. He asked if I wanted to work for him. I was getting into 35mm photography, shooting on the streets, and I wanted to see New York again. When I got there, it was a mess. Dirty and chaotic. I went about showing it in grainy black and white. Vogue was paying for all my materials so I shot like crazy, all over the city. And at night I printed like crazy, going through boxes and boxes of paper. It soon turned into a book, but it was too harsh for an American audience, too negative for the 1950s. I published it in Europe.

That photobook, New York (1956), became incredibly influential. I hear you did everything on it.
Yeah, the photos, the layout, the captions written in a kind of Dada-tabloid jargon. It was really graphic, with over-inked blacks and a candy-coloured cover.

It was the opposite of Vogue.
I wasn’t trained in photography. I had no technique, so it was all improvised. But I liked blur, and grain. I was intimidated by the two great fashion photographers, Irving Penn and Richard Avedon. My first Vogue work was still-life pictures of shoes and fabrics, in the style of Penn. But soon Liberman allowed me to work with the models. He was an artist himself, open to ideas, and I wanted to experiment. I would take the models into the busy street and shoot them there, or bring the street into the studio in the form of photographic backdrops.

For a few years you switched between the slickness of Vogue and some wild, in-your-face documentary photography. Those are different worlds, although there’s a important aspect of performance in both.
Fashion was really fun, very glamorous, and it opened some doors to other things I was interested in doing.

You made photographs for Vogue in 1962 where the models are surrounded by squiggles of light.
Those were double exposures. First, I would shoot the model. She then held the pose and we turned off all the lights in the studio. In a second exposure, lasting a few seconds, an assistant would use a flashlight to draw shapes in the air around the model’s body. The result was terrific, I thought. It brought those early abstract experiments into my fashion work.

Were you free to do what you wanted at Vogue?
Pretty much. I was on a monthly salary – not a lot, but enough to live on. I would come up with a visual idea and, if it was good, Liberman would say, ‘OK, we need eight, ten, twelve pages on the latest fashion collection.’

One of the models on that 1962 shoot was Dorothy McGowan, right?
Dorothy was a street kid from Brooklyn. She could improvise, she always knew the frame I was using, and fitted into anything. A few years later, she was the star of my movie Who Are You, Polly Maggoo? (1966).

You had made documentary films before that, including a terrific study of the young Cassius Clay (Cassius, le grand, 1964-5). But Polly Maggoo was a fictional satire of the fashion industry.
I was an insider so I knew the crazy reality of fashion. I shot the movie in France. Dorothy plays a naive ‘American in Paris’ who becomes a famous model. I was working for French Vogue, too, so the movie has a lot of gags about the Parisian fashion scene.

It’s easy to ridicule the fashion world, but your film also has a tender heart.
Polly Maggoo was a vulnerable character. She goes on quite an emotional journey, from obscurity to fame, so Dorothy had some pretty demanding scenes. She went to the Actors Studio in New York to prepare.

Beyond the printed page, you have been innovative with the way your images are presented. At Tate Modern, 2012-13, you had large framed prints, images pasted directly to whole walls, books, magazine covers and movie projections.
It goes back to my painting. I was always thinking about scale and space – the architecture of display. Today, of course, it’s quite easy to make images any size you want and print them on different materials. In a recent show inside the cathedral in Rouen, France, I had my abstract photographic images printed on fabric, hanging like banners in the middle of the space. And during the week of Photo London, there will be two 9m murals in the courtyard of Somerset House.

What images are included in the murals?
A mixture of the Vogue light portraits and stills from Polly Maggoo.

You’ve made photographs and films all over the world. Did you ever shoot in London?
Sure. By the time I began working for British Vogue, I was a bit of a star, which made things easier. I did some documentary projects for London magazines like Town and Queen, and I explored Britain with my wife. I thought Wales was wonderful. We were driven around at high speed by a poet and stayed in a castle. Scotland, too – even the island of Harris, which was like being in a movie. When we signed the hotel register, the name before ours was Alfred Hitchcock! I was photographing all the time. I’m putting together a book of that work.

Your British pictures will come as a great surprise. Are there more hidden gems in your archive?
For a long time, I never really looked back. Now there’s such a large body of work, going all the way back to the 1940s – there are things to rediscover. Some of the images for the Photo London murals haven’t been seen since those Vogue pages, more than 50 years ago.