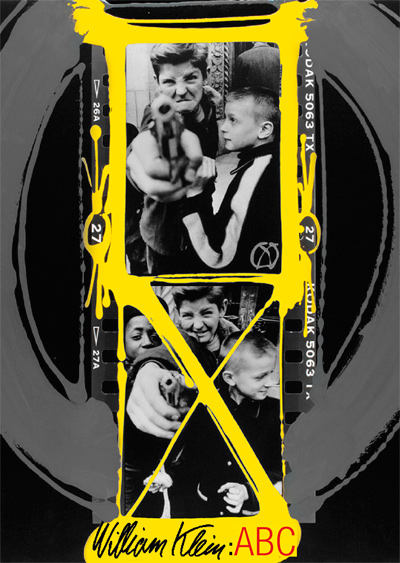 From the TATE dust jacket:

“THIS ASTONISHING BOOK, FOR WHICH ALL THE PHOTOGRAPHS HAVE BEEN SELECTED AND LAID OUT BY WILLIAM KLEIN HIMSELF, IS AN INSPIRING VISUAL HISTORY OF A LONG AND DISTINGUISHED CAREER […]

SUPPLEMENTING THE STUNNING IMAGES IS AN INSIGHTFUL TEXT BY DAVID CAMPANY THAT IN KLEIN’S OWN OPINION WOULD BE IMPOSSIBLE TO BETTER AS A SUCCINCT DISTILLATION AND FINE UNDERSTANDING OF HIS LIFE’S WORK ACROSS A WIDE RANGE OF ARTISTIC FIELDS.”

Extract from the essay:

Few artists have an approach that is all their own, even fewer working in film and photography and design. You are holding a book that could only have been put together by William Klein.  From his early abstractions to his Dada-Pop take on 1950s New York.  From Rome, Tokyo and Moscow to Paris, London and Algiers.  From the pages of Domus, Vogue and his photographic books, to the twenty-plus documentary and fiction films. This is Klein’s ABC. Signposts to sixty years of work and a guide to the teeming, voluptuous, ghastly, lovable, absurd, angry, tender, gruff and beautiful decades we have lived since World War Two.

These days any artist with a singular vision is presumed to be an outsider, especially one who is more interested in the world itself than the ‘art world’ or the ‘film world’. But the label is an odd one for Klein, a man so immersed in the contradiction of modern life, so profoundly curious about how it has left its mark on us all. He has been unflinchingly close to the heart of global-imperial-petrococadollar capitalism, seeing how it shapes desires, ideologies, even our unconscious. Klein has been inside what matters and outside what doesn’t.

He was born in 1928, at 5th Avenue and 110th St, on the edge of Harlem, New York. A Jewish kid in an Irish neighbourhood. He was clever, got a place at a good school and could do as he pleased so long as he did well. By the age of twelve he was soaking up great cinema and roaming the nearly empty galleries of the Museum of Modern Art.  Too young to serve in the war he studied sociology.  But in 1946 he joined the army and was stationed in Germany as a radio operator on horseback. That year he won his first camera in a poker game. Every image since has been a little pokerish: street-wise, bluffing, anticipating. Intuitive and spontaneous too: the last thing you want in poker or art is formula.

Fuelled by what he had experienced at MoMA he was keen to get to Paris. In 1948 he got a chance to enrol at the Sorbonne. On his second day in the city he asked a beautiful woman for directions. It was Jeanne Florin and they were soon married.

There was no point pretending Paris after the war was Paris before the war. The city was no longer the centre of culture (although it did have the daily glories of Henri Langlois’ Cinémathèque Française). Briefly he came under the tutelage of the painter-sculptor-filmmaker Fernand Léger. “Get out of the galleries”, he warned. “Think about architecture. Think about the street.” The advice would prove right but it did not hit home right away. Klein’s early career breaks came from exhibitions. He made figurative paintings, then hard-edged abstract paintings for a few years. At a gallery in Milan, the latter were seen by the architect Angelo Mangiarotti. Klein was asked to recreate one on rotating room dividers in a Milanese apartment. It was his first commission. Out of the gallery, into architecture. While photographing the set-up, he caught the blur of the spinning panels. Painting morphed into kinetic sculpture. Hard edges became fluid. The camera documented and transformed.

Back in the darkroom he explored pure light, form and materials. It was a late Bauhaus self-education guided by László Moholy-Nagy’s book Vision in Motion and György Kepes’ The New Landscape.  Cutting holes in sheets of paper – circles, squares, slots and stripes – he made dozens of abstract photograms. A bridge between the Bauhaus and the graphic arts to come. In November 1952 Gio Ponti’s architecture and design magazine Domus began to publish them as covers. In early 1954 he presented some alongside kinetic panels in a Paris group show, Le Salon des Réalités Nouvelles. The editor of American Vogue, Alexander Liberman, was in town for the fashion shows and saw the exhibition. He asked to meet. Enthusiastically, Klein showed him more. Vogue published his Mondrianesque photos of Dutch barns in its April issue. Liberman was a painter-sculptor with a talent for magazine design. Doing Vogue subsidized his art. Klein liked that.  Would he like to join Liberman at the magazine? Doing what?  Odd jobs in photography. Why not?

After eight years away he returned to a New York that was familiar but strange. A world of McCarthy and Marilyn, Elvis and excess, A-bombs and admen. The abstraction would have to go, or be channelled into something else. Vogue allowed him to invent and innovate for more than a decade. In fact he had no choice: he was untrained and just about everything was new to him. He admired the polished beauty of the best fashion photography but took it in his own direction. Experiments with lighting. Emphatic poses stolen from painting and cinema. Even a shop front could be repainted to complement the season’s clothes. Streets could be photographed, blown-up and brought into the studio as backdrops. He was well paid for the first time in his life. Plus, Vogue funded him to go into the streets and photograph the urban scene. “I felt like a Macy’s parade balloon floating back after a million orbits. I knew the city but it was now in a different focus. All the sights and sounds I had missed or had forgotten or never even knew suddenly moved me very much. I was in a trance but I was able to do something about what I felt. I had a camera but I barely knew how to use it.” For eight months he shot with extraordinary energy, making hundreds of images. It was almost a game to see how much one could photograph, how much one could invent. The camera was being used to discover the city, the city to discover the camera. It was a mutual exploration in the spirit of Dziga Vertov’s film Man with a Movie Camera (1929).

Although New Yorkers were not ready to admit it, their city had been falling apart, becoming a slum. He harnessed every ‘bad’ technique to his expressionist vision. No rules. No good manners.  Wide angle distortions. Blur. Unconventional focus. Over- and under exposure. Quick reactions. Accidents. Provocations. Then, with all the lessons learned in the darkroom, his negatives became raw material. Grainy blow-ups. Wild cropping. Moving the focus while printing. Chance. Fun. Risk. Photography had never looked dirtier, edgier, livelier or more delirious. Neither had New York.

Klein has never made any pretence to objectivity but there is a deeper psychological realism – an honesty of feeling achieved not by retreating from the world to a cool distance but by throwing himself into it. The camera was not so much a glass barrier as a floodgate.  His crowded frames pulsate with human drama in close-up. The observer is inseparable from the observed, implicated and complicit. A great Klein photo is a snatched marvel of formal organization but it never lets you forget it is a physical encounter. A kiss or slap. At best, both.

David Campany and William Klein in conversation at the Museum of Art & Design, New York