War and the Medical Gaze 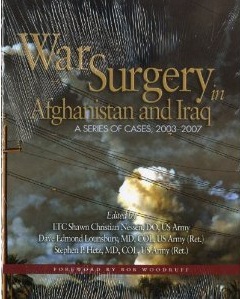 In 1924 the German pacifist-anarchist Ernst Friedrich published an illustrated polemic titled War Against War. It was a picture book that gathered together images of war and its effects that had been censored, suppressed or were never intended for public consumption. There were photographs of what have come to be known as war crimes, of injured and dead soldiers in the trenches and a number of medical photographs of appalling facial wounds and scars.

The text (in four languages) was a mixture of Friedrich’s anti-war sentiment and ironic quotations of jingoistic war propaganda. It was the first time that most of those not directly involved in the First World War had seen its human cost so explicitly. There had been statistics of the losses, representations by artists and poets but nothing with the force of these photographs. It sold many hundreds of thousands of copies. War Against War was and still is shocking. In the copy I have seen someone had pasted a ledger onto the inside cover, urging the reader to sign their name and then hand it on to someone else. How right that was. Keeping such a book seems absurd: it should circulate.

In Regarding the Pain of Others (2004), Susan Sontag is haunted by a number of the images she has seen in War Against War. She returns to them at a number of points in her unillustrated argument about the effects of the depiction of suffering. For all the gallant efforts of photojournalists to fashion convincing images it is the medical photographs of brutal injuries that she cannot dislodge from her mind. While she never quite puts her finger on why this might be, it is probably safe to assume that the force of those images derives very precisely from the fact that they are not trying to persuade you of anything. They lack any of those forms of visual rhetoric that aim consciously to direct your response. On the contrary, good medical photographs, like good doctors, need to be sober and level-headed. While images that are designed to draw our compassion may lead to compassion fatigue, these shots of injuries are stubborn, insistent. Faced with such directness it is the viewer who feels the compassion and the imperative to interrogate the cause, rather than having it directed vicariously by a photojournalist whose compassion may be as brutal in its own way as the horrors she or he photographs.

If we follow this line of thought it raises some very complicated questions for photojournalism. It suggests that the truly effective photograph is the one that resists commentary or the pictorial strategies of compassion. It is a flat document that relies instead on the informative caption to contextualise what it shows. Photojournalism has often been caught in a dilemma in this regard. It makes a claim to objectivity while also trying to ‘convince’ at the level of the image, showing you the world’s unfreedom while also telling you what to think about it. But photojournalism might be more effective if it resisted doing this.

I am reminded of Roland Barthes’ review essay ‘The Scandal of Horror Photography’ of 1969 (reprinted in his anthology The Eiffel Tower). Seeing an exhibition of ‘shock photos’ in Paris, Barthes finds he is not shocked at all because he can sense the presence of the photographer directing his emotion via artful composition and emotive printing. Barthes suspects the photographers’ good intentions tend to pacify the viewer, even directing the response away from what is being reported and towards judgment of the photograph as a ‘picture’. The few photographs that do trouble Barthes have the kind of instrumental directness of the police picture, the mug shot or the medical photograph.

The police photo or the medical photo are characterized by a gaze not meant for ‘us’. If we see a police or medical photo we are seeing something from outside of the profession and purpose that brought it into being. But we find ourselves unable to be as dispassionate as that, and the effect such pictures may have on us derives from the disjunction. Modern warfare is of course brought about and sustained by just these kinds of disjunction. This is why, despite the profusion of ‘committed’ video- and photojournalism we rarely see pictures of the kind of brute factuality brought to light by Friedrich’s book. But they do exist.

In 2008 the publishing wing of the United States Army issued War Surgery in Afghanistan and Iraq: A Series of Cases, 2003-2007 (edited by Shawn Christian Nessen and Dave Edmond Lounsbury) . It is a medical training manual. War is a technological business and new advances in the techniques of killing and maiming are producing ever newer kinds of injury. For example, in war today bombs cause many more deaths and injuries than bullets, and they keep changing their blast patterns to stay one step ahead of the medics. The book is an aid to field surgeons who are about to go into war zones but may have never encountered such injuries. Compassion and commentary are reserved for the book’s foreword (by the ABC News anchorman Bob Woodruff who was himself almost killed by a bomb in Iraq in 2006) and the afterword (quotations from Virgil and Wordsworth). The bulk of the 440 pages are given over to the surgeons themselves; to show with copious photographs and explain with detailed notes just how they attempt to save lives. In the first instance the book is intended for American surgeons but one would hope all surgeons might get an opportunity to see and benefit from it.

To those outside the medical profession this is a difficult book to look at. The photographs are necessarily graphic, although of course they are not intended to shock, disgust or persuade. They are surgical aids. But there was some serious resistance within the American army, including some military surgeons, to the publishing of this book, given the risk that it might fall into civilian hands. But it was published. I don’t suppose we will ever know if somewhere along the line there was a secret hope that the book would reach an audience beyond the military or even become a tool of the anti-war movement. But that potential is there. In fact now it is very easy to download pdf’s of the whole book.

I should explain how I found out about the book, since this is itself significant. A friend with a great interest in the problems involved in the representation of war told me of a piece written about it by Donald G. McNeil Jr. in the ‘Health’ section of the website of the New York Times (‘To Heal the Wounded’, August 5th, 2008). McNeil gives a good account of the book’s genesis, even reporting a series of changes instructed by censors, including the obscuring of faces and genitals, and the removal of detailed descriptions of how the American soldiers came to be injured in the first place. The website also reproduces several representative spreads of the book. On the face of it McNeil was simply presenting as specialist news the issuing of this Health-related publication. I have no idea if either he or the New York Times harbored some hope that publishing the article online might also extend the book’s reach beyond surgeons. In any event, it seems improbable these days that a book could be published and read by only the narrow group for whom it was intended, particularly a book such as this. News travels fast even if books do not. War Surgery in Afghanistan and Iraq: A Series of Cases, 2003-2007 took weeks to arrive in the post from the US but arrive it did. I have read it and come to my own conclusions. I shall sign my name in it and pass it on.

Thanks to Richard West at Source magazine for first publishing this piece.