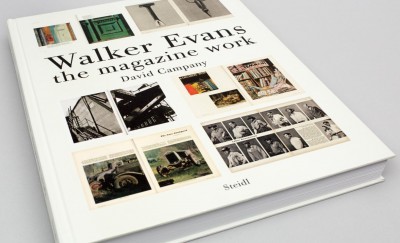 Walker Evans was one of the most important and influential artists of the twentieth century, producing a body of photographs that continues to shape our understanding of the modern era. He worked in every genre and format, in black and white and in colour, but two passions were constant: literature and the printed page.

While his photographic books are among the most significant in the medium’s history, Evans’s more ephemeral pages remain largely unknown. In small avant-garde publications and mainstream titles such as Harper’s Bazaar, Vogue, Architectural Forum, Life and Fortune he produced innovative and independent journalism, often setting his own assignments, editing, writing and designing his pages. Presenting many of his photo-essays in their entirety, Walker Evans: The Magazine Work assembles the unwritten history of this work, allowing us to see how he protected his autonomy, earned a living and found audiences far beyond the museum and gallery.

Walker Evans: the magazine work was also shortlisted for the PhotoEspana book award, 2015

When did you get interested in Walker Evans’ work for magazines?

I came across his single spread piece ‘Labor Anonymous’ (Fortune, November 1946) on the stall of a street vendor in New York City one summer, years ago. I remember being struck by how sophisticated it was – not just the photography but the layout and writing. It made me wonder what else he’d done.

He worked for a living, right?

Yes, there are only four ways to function as a photographer. Either you are independently wealthy; or you get paid to take pictures (a commercial photographer, with whatever independence of mind you can retain); or you get paid for photographs (i.e. as an artist – this only happened for Evans in the last few years of his life); or your photography is a hobby, a pastime, and you earn your living elsewhere. Evans had little money but was very independent of mind. He worked in American magazine culture but often fought its attitudes and values.

And Evans was a writer too.

Yes. His first ambition was to be a writer. Photography came along for him in the late 1920s but he never lost the desire to write. He found very innovative ways to write and shoot photo-essays.

You have put together a collection of just about everything he published in magazines.

That’s right, not just Fortune but early avant-garde journals, architectural journals, Vogue, Harper’s Bazaar, Sports Illustrated and many others. It took about five years to gather up all the known material, and I came across a few unknown things too. My book reproduces dozens of his photo-essays in facsimile, so you can see his photos, writing and layouts.

He never used the pages simply to showcase his talents as an image-maker. He was truly committed to fashioning a counter-commentary on America and its values but from within its mainstream magazine culture. Plus he got himself into a position where he could set his own assignments, write, edit and lay out his pages. That’s extremely rare. Photographers hardly ever get the chance to be involved in those aspects (which is why they are often so desperate to run off and make a book of their work – more control but a smaller audience)

What is the format of your book?

It began just as a visual book with the best of his pages introduced through a short essay by me. My publisher Steidl announced the book was in production and suddenly I had people emailing me wanting to know if the writing was going to explain how Evans managed to do what he did. So I went back and expanded the essay, putting in lots of the detail I picked up during my archival research. Now there’s a pretty comprehensive 25,000 word essay (heavily illustrated). It tells the whole story of Evans’ early love of printed matter, his keen interest in the publications of others and his years at Time Incorporated where he made work for Fortune, Time, Architectural Forum, Sports Illustrated and Life. But the real heart of the book is the second part, which shows a great deal of Evans’ magazine work in full.

This is very different from your previous books.

I’m trying not to repeat myself! I do want each book to be different, not just in its subject matter, but in the form of the writing. I’ve written a book about a single image; a thematic book about stillness and movement; some catalogues for exhibitions I’ve curated; a thematic book about art and photography. The Walker Evans book is a deep historical study. My first and last.

Read an extract from the introduction to the book:

The career of Walker Evans stretched from 1928 to 1975, perhaps the most important period in the history of photography. In the 1920s the medium asserted its modern significance, spreading to every corner of culture via the growing illustrated press, becoming an art both popular and avant-garde. In the early 1970s, as the power of the illustrated press began to wane, photography secured its place in the museum and gallery. Evans was first published in the American cultural journals of the late 1920s and 30s. After the war he worked for Fortune for twenty years. He also published in Harper’s Bazaar, Vanity Fair, Vogue, SportsIllustrated, Flair, Mademoiselle, Architectural Forum and Life, among others. Where possible he set his own assignments, did his own editing and design, and supplied the accompanying words. A brilliant and idiosyncratic writer, he also penned appreciations of photographers and painters he admired, and wrote reviews for Time magazine and The New York Times.

Although Evans began to exhibit his work around the same time that he began to publish, he did not have many shows in his lifetime. He was uneasy with photography as art and cautious about his image as an artist. He did not even attend the opening night of his now legendary solo exhibition at the Museum of Modern Art in 1938 (but he did lock himself in the night before to ensure the complex sequence of images on the walls was as he wanted). He was just as ambivalent about the printed page. In letters to friends he railed against the crass populist press and compiled for himself a scrapbook of its worst offences. Nevertheless he was formed and fascinated by printed matter, and felt even the most conservative publishing empire might afford the space to make good work with a resistant attitude.

Little of Evans’ magazine work is well known. Unlike a museum’s holdings, or even photographic books, magazines are ephemeral. They are expected to have a short shelf life and when it expires they often take with them the most revealing culture of their time. Despite his long working life most of the photographs upon which Evans’ reputation still rests were made in 1935 and 1936, in the American south. It was an intensively creative period in which, well paid and well resourced for the first time in his life, he focused on the making of pictures that were formally ambitious and layered in meaning. His output was prodigious. He loosened the directives set for him by his commissioners, the U.S. government’s Resettlement Administration (later the Farm Security Administration) and Fortune magazine. Deferring the question of use the images piled up. Perhaps inevitably they came to the museum as exemplary photographs in the “documentary style”, as Evans called it. After the 1930s he did reach those pictorial heights again but he never surpassed them. This is not uncommon among even the greatest photographers. Many achieve their best work early. Either they try to sustain it, which often proves difficult, or they leave for something else.

Evans’ path was different. As his career developed, his commitment to photography extended far beyond the single image to take in the whole craft complex of modern photographic culture. Rather than simply shooting and handing over his pictures to editors or agencies he sought to take much more control. This included editing, writing, design and typography and the development of an acute sense of context. In his first decade (1928–38) he mapped out for himself the enormous possibilities of sequencing and image-text relations. He also established his chief interests: America’s anonymous citizenry and vernacular culture, those emblems of resistance to the creeping values of celebrity, corporate business and consumerism. These interests became passions, explored slowly and carefully across an entire career in print. This is what makes the magazine work such a significant and lasting aspect of Walker Evans’ achievement.