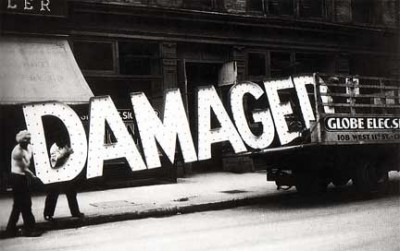 A short essay outlining the significance of Walker Evans as a writer.

Walker Evans was one of the most renowned photographers of the last century. His documentary style is often described as ‘literary’ and his reputation rests in part on books produced in conjunction with writers: The Crime of Cuba (with Carleton Beals, 1933); Let Us Now Praise Famous Men: three tenant families (with James Agee, 1941); and The Mangrove Coast: The Story of the West Coast of Florida (with Karl Bickel, 1942). For each Evans provided a discrete folio of photographs.  However, his significance as a writer concerns a small number of unusual texts produced across his career.

As a student Evans followed with great interest modernist writing as it appeared in progressive journals of the 1920s. Dropping out of college he worked in a French language bookstore and at the New York Public Library, securing access to the latest European culture. In 1926 he went to Paris for a year. He enrolled on language and civilization courses and made tentative forays into writing short fiction while translating extracts of Charles Baudelaire, André Gide, Jean Cocteau and others.

Returning to New York he pursued writing and photography in parallel. The journal Alhambra published one of his photographs of skyscraper construction and his translation of part of Blaise Cendrars’ novel Moravagine. For the feature ‘Mr Walker Evans Records a City’s Scene’, published in Creative Art (1930), he combined words with images in various ways: within the picture frame, as dynamic typography, as titles and as captions. In 1931 Hound & Horn published small groupings of his photographs and the remarkably perceptive ‘The Reappearance of Photography’, a review of several recent photographic books. This text can also be read as a statement of intent at the outset of his photographic career. It opens with remarks on photography’s relation to history, time and space, noting that its early promise was followed by a long and moribund development. Recent practice was dominated by “swift chance, disarray, wonder and experiment” (snapshots, disorienting close-ups, the unorthodox angles of the New Vision and Constructivism). This, thought Evans, was already becoming a tiresome gimmick and less significant than the slower, measured procedures of August Sander and most importantly Eugène Atget:

“Certain men of the past century have been renoticed who stood away from this confusion. Atget worked right through a period of utter decadence in photography. He was simply isolated, and his story is a little difficult to understand. Apparently he was oblivious to everything but the necessity of photographing Paris and its environs; but just what vision he carried with him of the monument he was leaving is not clear. It is possible to read into his photographs so many things he may never have formulated to himself. In some of his works he even places himself in a position to be pounced upon by the most unorthodox of surréalistes.” [Four Atget photographs had been reproduced in the journal La Révolution Surréaliste].

The slickly commercial book Steichen the Photographer (1929) was quite the opposite: “photography off track in our own reiterated way of technical impressiveness and spiritual emptiness […] his general tone is money.” Evans also considered Photo-Eye (1929) the influential survey of New Vision photography assembled by the critic Franz Roh and graphic designer Jan Tschichold to coincide with Film und Foto, the huge touring exhibition that debuted in Stuttgart. It was a “nervous and important” publication and he admired its preference for direct documents over art. It included press photos of corpses, “because you like nice things”, wrote Evans sardonically. He found Albert Renger-Patzsch’s Die Welt ist schön (The World is Beautiful, 1928)  “exciting to run through in a shop but disappointing to take home”, a “round-about return to the middle period of photography.” August Sander’s Antlitz Der Zeit (The Face of the Time, 1929) comprising sixty portraits from his survey of the German people was an assembly of “type studies” and “one of the futures foretold by Atget”: a “photographic editing of society, a clinical process.”

‘The Reappearance of Photography’ has much in common with Walter Benjamin’s celebrated essay ‘A Small History of Photography’, published concurrently in Germany. It too was a review of recent photobooks including the Atget, Sander and Renger-Patzsch titles, couched as a diagnosis of the medium’s past and present. Both writers noted nineteenth century photography was undergoing renewed interest. Both noted that early achievements were followed by descent into the populist mire of cartes de visite, narcissistic portraiture, commerce and kitsch. This was the complaint of Charles Baudelaire in his tirade against photography ‘The Salon of 1859’ and both were profoundly influenced by Baudelaire’s ability to look elsewhere, to find the spirit of modernity in its everyday details and vernacular forms. Both also noted an important recent turn toward books of intelligent documents assembled along archival lines that might reward a historically and politically alert audience.

From 1934 Evans worked occasionally for the business and industry magazine Fortune. In 1936 he was commissioned to travel with James Agee to document the lives of poor tenant farmers in the American south. Their overlong and unpublishable material was eventually reworked into the book Let us now Praise Famous Men.

With little paid photographic work during the War, Evans took a job at Time magazine reviewing films, books and art. Although not ideal it satisfied the desire to write. Agee was part of the close-knit staff, as were Louis Kronenberger and Saul Bellow. Time writers were encouraged to be concise, urbane, witty and worldly. Wherever possible Evans championed the aesthetic restraint he admired and took swipes at artiness, including a withering assessment of Georgia O’Keefe’s paintings, whose success was due in no small measure to her partner, the photographer “Dealer Stieglitz” (Evans, 1945). He also highlighted The Bombed Buildings of Britain, a photographic book of war damage, noting the “the peculiar aesthetic” of the “architecture of destruction”, a theme central to his own photography. Honing his short-form prose he published around seventy uncredited reviews.

In 1945 Evans joined Fortune’s staff, remaining until 1965. ‘Homes of Americans’ (Fortune, May 1946) presented an archival trawl of uncaptioned photos of U.S. housing stock. An introductory text showed his interest in testing the limits of photos as documents:

“Photography, that great distorter of things as they are, here as elsewhere, played its particularly disreputable, charming trick. But like the deliberate inflections of men’s voices, they are tricks now and then lifted to an art. Take your time with this array […] it may pay you to incline with Herman Melville to ‘let the ambiguous procession of events reveal their own ambiguousness’”.

In 1948 he became Fortune’s Special Photographic Editor securing a level of autonomy unheard of in American magazines. He set his own assignments, shot the images, wrote the text and designed the layouts, answering not to the art director but to the editor.  He never used the pages as an art gallery but produced subtle photo-essays that subverted magazine convention, addressed marginal subjects and encouraged audiences to think about how photographs function, always resisting the slick narrative style and hegemonic populism of Time Inc.’s flagship illustrated magazine, Life. (Evans and Agee once planned to gain control over several pages of each issue of Life for more experimental forms of journalism but nothing came of it).

‘Main Street Looking North from Courthouse Square’ (Fortune, May 1948) presented turn-of-the-century postcards with a text arguing that as an epoch passes so does its specific mode of self–representation (a idea central to Walter Benjamin). ‘Along the Right of Way’ (Fortune, September 1950), was a series of landscapes shot from train windows, where the nation appears “semi-undressed”, exposing the “anatomy of its living”. His images for ‘Imperial Washington’ (Fortune, February 1952) resemble a tourist’s survey of the capital’s stately architecture but the captions undermine this. The place is a “stage set” of power, indebted more to show business than history:

“The last, large burst of classicism struck Washington as a direct result of the Chicago World’s Fair of 1893. So successful was the midwestern creation in plaster that its chief architects and planners moved on to the capital almost to a man and forever froze the face of the city into its Romanesque Renaissance expression.”

The colour photographs for ‘The Pitch Direct’ (Fortune, October 1958) relish the unsophisticated display to be found outside small shops while Evans’ text is ironic and affectionate:

“The stay-at-home tourist, if his eye is properly and purely to be served, should approach the street fair without any reasonable intention, such as that of actually buying something […] Does this nation overproduce? If so one can get a lot of pleasure and rich sensual enjoyment out of contemplating great bins of slightly defective tap wrenches, coils upon coils of glinty wire and parabolas of hemp line honest and fragrant. A man of good sense may decide after due meditation that a well-placed eggplant (2 for 27 cents) is pigmented with the most voluptuous and assuredly wicked color in the world.”

Evans produced over forty image-text essays for Fortune and seven for Architectural Forum (also part of Time Inc.). ‘Color Accidents’ was a suite of square compositions picked out from weathered walls of a New York street (Architectural Forum, January 1958). The writing compares but distances them from abstract expressionist painting, then at its popular height:

“The pocks and scrawls of abandoned walls recall the style of certain contemporary paintings, with, of course, the fathomless difference that the former are accidents untouched by the hand of consciousness […] Paul Klee would have jumped out of his shoes had he come across the green door below […] Lest the buildings of tomorrow engender no patina whatsoever, certain nicely encrusted objects may well be recorded now. Decorative design itself, such as that on this ponderously charming door – as modish as a celluloid collar – is surely being threatened by the forces of speed and utility.” (Evans 1958a: 110-115). During the 1950s Evans also wrote reviews of books on film and photography for The New York Times.

In 1969 Evans was invited to write the section on photography for Louis Kronenberger’s anthology Quality: Its Image in the Arts (1969). It was his last major statement on the medium.  He chose images taken by Nadar, Cameron, Steichen, Steiglitz, Strand, Brandt, Brassaï, Cartier-Bresson, Levitt, Frank, Friedlander, Arbus and Lunar Orbiter 1, among others. Each double spread carried one image with a text opposite, a format developed by John Szarkowski for his influential book Looking at Photographs (Szarkowski 1973). Although there was great variety in Evans’s selection it conformed to his own photographic aesthetic established forty years earlier:

“ (1) absolute fidelity to the medium itself; that is, full and frank and pure utilization of the camera as the great, the incredible instrument of symbolic actuality that it is; (2) complete realization of natural, uncontrived lighting; (3) rightness of in-camera view-finding, or framing (the operator’s correct, and crucial definition of his picture borders); (4) general but unobtrusive technical mastery.”

Walker Evans (1903-1975) was born in St. Louis, Missouri. Early ambitions to write took him to Paris for a year. In New York he became part of a literary and artistic scene including Hart Crane and Lincoln Kirstein. His photographs appeared in various journals and he took commissions to document Victorian architecture and African sculpture. In 1933 he photographed Havana for Carleton Beals’s exposé The Crime of Cuba. For the Farm Security Administration and Fortune magazine he photographed the effects of the Depression in the American South. In 1938 he was given a solo exhibition and the Museum of Modern Art, New York. The accompanying publication American Photographs became highly influential. He wrote reviews for Time magazine (1943-45) before producing photo-essays at Fortune for twenty years. In 1965 he took a teaching post at Yale. In 1966 he published two books: Many Are Called and Message From the Interior. Overlooking his publications and focusing largely on the Depression work, a retrospective at MoMA in 1971 sealed Evans’s reputation as a maker of exemplary single photographs in what he called the “documentary style”. His writing and work for the magazine page slipped from public attention.

Bickel, Karl A. (1942) The Mangrove Coast. The story of the west coast of Florida (Coward-McCann Inc., New York).