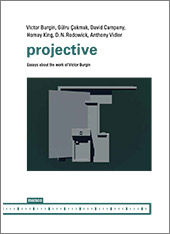 projectivewritings on the work of Victor Burgin

Includes an extended conversation between Victor Burgin and David Campany

2. Psychology : relating to the unconscious transfer of affect upon another person or thing; e.g., projective identification.

Victor Burgin first came to prominence as one of the originators of Conceptual Art through his contributions to such seminal exhibitions as When Attitudes Become Form (1969) and Information (1970). In formal terms his gallery works and theoretical writings focus on image-text relations, advancing an understanding of “image” in which neither optical nor verbal predominates. In terms of content he is most concerned  with the affective agency of space and place, and the work of the unconscious in the formation of beliefs and values. Initially working with still photography Burgin has for the past twenty years explored the ground between “still” and “moving” images. The writers of the four essays in this book use Burgin’s recent projection works as “objects to think with” in their own work. D. N. Rodowick reflects on a “new kind of time-image” that presents what he calls a “naming crisis” in respect of questions of movement, image, memory  and history. Gülru Çakmak’s thinking turns around the Istanbul coffee house at the centre of one of Burgin’s works as a place to reflect on orientalism and the cultural politics of modernity. Homay King elaborates a formulation of the “virtual” by viewing his work through prisms offered by Henri Bergson and Gilles Deleuze, while Anthony Vidler uses works by Burgin as models for interpreting “the spatial unconscious of architectural modernism.” The conversation between Victor Burgin and David Campany with which the book concludes reveals the artist’s own thinking about the relation of his work to the sphere of visual culture in general and “visual art” in particular.