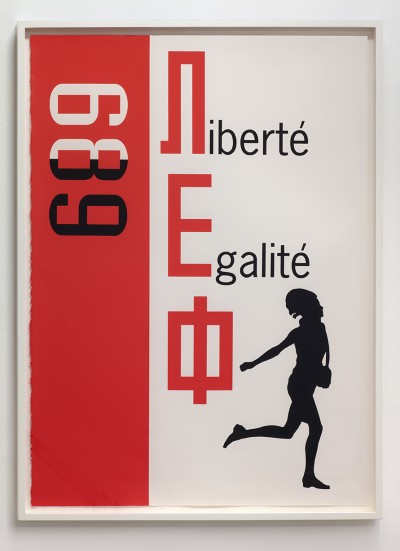 All photos by Peter White.

Victor Burgin first came to prominence in the late 1960s as an originator of Conceptual Art, when his work appeared in such key exhibitions as When Attitudes Become Form (1969) at the ICA London, and Information (1970) at MoMA, New York. He has since remained one of the most consistently influential artists and art theorists of his generation.

Burgin’s earlier work offered solutions to formal problems in the Minimalism he inherited from such teachers as Robert Morris and Donald Judd while a student at Yale School of Art and Architecture. He soon rejected the hermeticism of this legacy, expanding its phenomenological concerns to include such issues as class, gender and sexuality. In 1973, Burgin suggested:

A job the artist does which no-one else does is to dismantle existing communication codes and to recombine some of their elements into structures which can be used to generate new pictures of the world.

Here an artist isn’t simply someone who works within the institutions of art; it is someone who works at odds with and in relation to the structures of culture at large. An artist may well exhibit in galleries but may also be a writer, architect, filmmaker, designer, musician, or speaker. Burgin himself has made visual work and written essays for over forty years. His photography and video pieces are visual and textual, and so is his writing.

Drawing on the conventions and rhetoric of mass media imagery, Burgin began to produce allegorical works with photographs and text. These works operated both on the printed page (posters, postcards, books, exhibition invitations, magazine interventions) and the gallery wall.  In 1986 he wrote:

My decision to base my work in contemporary cultural theory rather than traditional aesthetics, has resulted in work whose precise ‘location’ is uncertain, ‘between’: between gallery and book; between ‘visual art’ and ‘theory’; between ‘image’ and ‘narrative’ – ‘work’ providing work between reader and text.

In this sprit Burgin has produced a number publications that defy categorization. Work and Commentary (1973), Between (1986), Some Cities (1996), Venise (1997), Voyage to Italy (2006) and Components of a Practice (2008) are not catalogues, nor monographs, nor “artist’s books”, nor “theory” books narrowly defined. Their hybrid form reflects Burgin’s hybrid thought and work.

In addition Burgin has produced a number of books that anthologize his influential essays and interviews: Two Essays on Photography and Semiotics (1976), Thinking Photography (1982), The End of Art Theory (1986), In/Different Spaces. Place and Memory in Visual Culture (1996), The Remembered Film (2004), Parallel Texts. Interviews and Interventions about Art (2011)