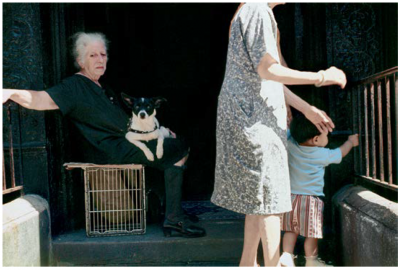 Making street photographs is both a formal photographic game and a test for anyone keen to discover what they really think about the world around them. Of all the genres, it is the most reactive, the camera equivalent to the psychoanalyst’s couch. In turn, the viewer can only ever respond to the work of a street photographer in the same way: looking at their photograph is a formal game and a test of what we might think about the world depicted. Second-guessing the photographer’s intentions may be tempting but it’s rarely satisfying, and when it is satisfying we’ve no way of knowing if our guesses are even remotely correct.

I feel these paradoxes acutely when I’m looking at Helen Levitt’s photographs. To spend time contemplating the apparent ease she had with her camera and with her surroundings is to become disarmed. Am I looking at what she was looking at? In the literal sense, of course not. She was looking at the world through a camera; I am looking at the image she made. But is what I find significant the same as what she found significant, or hoped her viewer might find significant? I cannot know. Photography makes a mystery of intention, for both photographer and viewer. I’m guessing Levitt felt this to be so. But I might be wrong.

Look at all those arms, and the cut-off hand. Look at all the legs, and the cut-off feet. Look at the heads, and the cut-off head. The bright flesh against the oily shadow. The flat space given depth at either side. The two sets of bars. The formal geometry and the unpredictable micro-movements. Is the empathy Levitt appears to have with her world at odds with her formal daring and surgical timing? Or are they part of the same act of recognition? Sometime in the late 1940s James Agee wrote:

“In their general quality and coherence [Levitt’s] photographs seem to me to combine a unified view of the world, an uninsistent but irrefutable manifesto of a way of seeing, and, in a gentle and unpretentious way, a major poetic work.”1

This issue of the Capilano Review, Eye to Eye (TCR 3.29), a co-production with Presentation House Gallery, featuring close to fifty writers responding to exactly thirty-five photographs curated from the collection of Andrew Gruft and Claudia Beck. Presented as part of PHG’s recent exhibition Eye to Eye, the photographs, books, and media art by historical and contemporary artists range from iconic vintage prints and photography books to recent photographic and moving picture works. With contributors invited to “play the part of the dramaturge, the essayist, the poet, the historian, the critic, or the jester,” what we offer here is a (very) special issue decidedly stranger and differently illuminating from your standard exhibition catalogue.