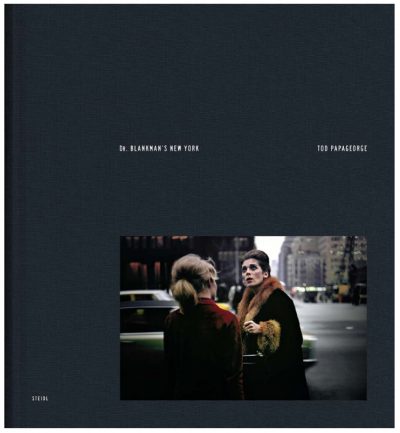 Tod Papageorge started making these color photographs in 1966, when he was twenty-five; he stopped early in 1967. They were all produced in New York, where he had just moved, on Kodachrome 25 ASA transparency film. He began, at least, with the hope that they might land him some commercial assignments, after his newly found friends, Garry Winogrand and Joel Meyerowitz, suggested the possibility. They landed him nothing of the sort.

The exposures would come back from the Kodak processing lab ready-framed, in date-stamped cardboard mounts. Papageorge would look at the projections once or twice, put the slides back in their little yellow boxes, and plunge again deep into the medium he knew was for him. In the ensuing decades, he has made several remarkable bodies of work that have chronicled American life, expanded the vocabulary of observational photography and earned their maker a reputation as an artist of the highest standards. If that were not enough, he has been a gifted and influential teacher (he knows what of photography can be taught) and a very fine writer.

A little remark he once made has of late attained the status of a provocation: “If your pictures are not good enough, you are not reading enough”. Well, if you have read enough, you’ll note a riposte to the photojournalist Robert Capa’s dictum: “If your pictures are not good enough, you are not close enough”. Capa didn’t quite imply that if your photographs aregood enough you must have been close enough, just as Papageorge does not suggest that you must have read enough. Rather, being close or being well-read might help remedy your photographic shortcomings. Be that as it may, looking at Papageorge’s earliest pictures here, you will see there were no shortcomings. He was certainly close enough, and with his own poet’s eye. Like Walker Evans before him, Papageorge entered photography fully formed. And like Evans, he hadread enough. Literature and poetry had shaped the sensibility.

The door to photography is always wide open. The medium could not be simpler to access. You can spend a lifetime exploring it, and drive yourself to exhaustion in the process, but you will never have to toil as you might with brushes and oils, or a musical instrument. What matters when you step into photography is what you bring with you. This is why, if the sensibility is right, great photographs can be made within a matter of months of taking up the camera. That’s a scandalous idea, not entirely welcome in these over-professionalized, specialized times.

But, while you do not need to study photography to make significant pictures, it will always serve you to have been first immersed in other things. Literature, music, film, poetry, painting. Photography is frequently compared with all of these but what really matters is how it permits the transmutation of whichever muse you bring to it. For example, a poet straining for the right adjective to flavor his noun may find that with a camera the two are inseparable: A photograph presents the noun adjectivally – not just a face, but that face, in all its specificity. Not just red, but that red; thatunrepeatable configuration of strangers on a street; that conjunction of cheekbones, eye shadow and lipstick; that cigarette held just so.

Baudelaire and Flaubert, Joyce, Eliot and Woolf struggled hard to honor the shifting ambiguities of daily life by presenting them within textual frames of profound lucidity. Writers who followed refined and expanded the means: When he made these pictures, Papageorge was fondest of the poet Robert Lowell. But those ambiguities flood into a camera almost unbidden, as effortless as light. The finest observational photographers watch this happen, marvel at it, attune to it, and coax from it their own rectangular coherence. Like a conduit channeling the flow.

Papageorge was often out on the streets with the hyper-kinetic Winogrand. It must have been exhausting to shoot with him. But many of the pictures gathered here were made at the end of those days, when Papageorge walked home alone. Like so many others, he was bitterly angry at America’s drift – the assassinations, the cheapened sentiments, the trashing of democratic principles, the anxiety and the dread – all of it easy to denounce. But these are not images made in anger, or in haste. Instead, Papageorge seems to have intuited that, at its core, depiction is an affectionate art. The anger here is tempered by empathy and fascination, and his photographs much more than predictable conveyors of raw emotion or rank political points. They take off in too many directions at once.

So, a leather jacket bearing the words Chu Lai Viet-Nam, worn by a young man with his family at the zoo, is enough of a reminder that the everyday, so beloved of street photographers, does not exist in a realm separate from History. What’s going on in front of you, on a sunny Sunday, may manifest symptoms from thousands of miles away. Photograph the small things and the bigger picture is discernible.

Street photography is always physical and emotional. It can be pursued at various intensities but photographers cannot choose their register. Rather, they must accept the rhythms of their own body and mind. Henri Cartier-Bresson could pirouette through a crowd, William Klein would confront and provoke. Once asked how he felt shooting The Americans, Robert Frank sighed and recalled: “I was in good shape back then.” It can exhaust the nervous system in a matter of years. Papageorge’s natural rhythms at the time that he made these pictures were distinctly slower, much closer to those of Helen Levitt (in her color work, at least). Few of his photographs grab figures careening through the frame. There is no grotesquery imposed by a quick shutter. Most often his subjects appear as pensive and circumspect as he is. That 25 ASAfilm would have frustrated a quicker photographer, but the necessarily slow shutter speeds accommodate the gentle gestures and poised comportments that on some level must have been mirrors of his own.

And then there are the shop windows, those pre-composed tableaux of material montage that remain unique in Papageorge’s oeuvre and, even today, he is unable to explain beyond saying with a smile that they represented his best sense of what he might photograph to earn commercial assignments. He had seen a few storefronts in the work of Eugène Atget and Walker Evans but they were yet to mean much to him. However these pictures came to be, though, they clearly demonstrate, and play on, the truth that such windows are always potent symbols of their epochs. They do not require a fast shutter at all but they are fleeting nonetheless, as transient as the season’s fashions.

Any shop window is a sociological goldmine, of course, but that does not nearly explain the appeal of these photographs, which, apart from their literal content, describe highly reflexive encounters. The glass that makes commodities visible also cuts off the observer. One might say the same of the camera, that it permits a photographer to connect to the world while it sets him apart. To look through the viewfinder or into a photograph is not unlike gazing at the picture frame of a storefront. So, an accidental arrangement in a restaurant window may resemble a Chagall (and may even contain a reproduction of a Chagall). Another may be as elegant and diffident as the minimalist painting then on view in Manhattan’s more chic galleries. Others have the gauche absurdity of the most endearing folk art. Some provide the period backdrop for unrehearsed sidewalk scenes. And, crucial to Papageorge, all of them must be read—textually, observationally, even physically (through the fragmented spaces they describe and the photographer’s own stance)—pointing in this chief way to the poetry from which his photography has always been drawn.

It is fifty years since Papageorge caught his own reflection in those windows, and lost it in those streets. Is half a century too much hindsight? Can we remember who we were, or trust our photographs to remind us? Yes and no. Seeing Thingsfeels like a great, lost book. In a parallel world it might have become a landmark. In some latent world it might still. Why the delay? Many reasons. Some personal, some pragmatic. Papageorge has said that audiences have never meant that much to him. Many of his projects have found their moment long after the photographs were shot. We barely got to see them when they were contemporary in the literal sense.