Theses on the Disaster of Photography

The Camera of Disaster, Studio for Propositional Cinema, 2022 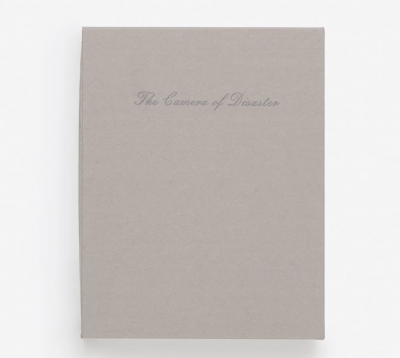 ‘Theses on the Disaster of Photography’ is an essay by David Campany commissioned for the box for The Camera of Disaster, by Studio for Propositional Cinema, 2022.

Theses on the Disaster of Photography

How many works of science-fiction have been made in the form of photographs? I am not thinking here of the work of photographers who see science fiction as no more than a style, a look, a mise-en-scene. (There is no end of image makers intent on mimicking the mere surfaces of Ridley Scott’s Blade Runner, Stanley Kubrick’s 2001: a Space Odyssey, or even Fritz Lang’s Metropolis.) Science fiction, like film noir, has really nothing to do with what it looks like, despite the visual conventions that accrue around it. What defines science fiction is the way in which it allegorizes the present, makes it thinkable from imaginary perspectives, points to its paradoxes and buried wishes, its aporia and impasses, signalling impending danger or possibility. That is a difficult enough challenge for cinema and literature, let alone still photography. So, it is not surprising that the very few works of genuine science fiction that have been made as photography come from somewhere between writing and film, adding to the still image the literary caption and the cinematic sequence. I am thinking here of Chris Marker’s filmic ‘photo-roman’ La Jetée, Victor Burgin’s book and website Afterlife, and now The Lensgrinders, from the aptly named Studio for Propositional Cinema. It is a series of still images with text overlays that seem to resemble subtitled frames from a film made in a foreign language in a time and place that feels both familiar and strange.

In order to set it apart and set it working, all good science fiction has its own founding conceit. There is the potential for time travel in La Jetée, the outlawing of all books in Ray Bradbury’s novel Fahrenheit 451, the deceptive and uncanny human replicants of Blade Runner, the downloading onto hard drives of the human mind in Burgin’s Afterlife, and the journeying to the unconscious (or is it the sublime?) in Andrei Tarkovsky’s films Solaris and Stalker. The founding conceit is what allows a work of science fiction to function as an allegory of the cultural, political and psychical milieu that produced it.

The more repressed a society, the more likely it is to produce the kind of wishful, fearful, utopian or dystopian thinking that characterizes science fiction. As Fredric Jameson noted in his remarkable book Seeds of Time, science fiction is often at its most potent and subversive under the spectre of totalitarianism. The terrifying power of an authoritarian regime may produce radical works of science fiction as symptoms of what the regime fails to recognize or permit.  Science fiction functions like a loophole or a secret passage, bypassing the fixed patterns of thought, and slipping past the censors.

What is the conceit of The Lensgrinders? Of what might this conceit be a symptom? And what kind of thinking might it make possible? The work declares itself right at the start:

This is a story of a band of dreamers, deprived of their own images. In their world, individuals have been denied access to image-production. Images may be produced only by the controlling regime. As generations have passed images have become monolithic. While everything is recorded at all times, the inability of citizens to produce and transmit images has re-imbued the image with a divine hold. As their truth is unquestionable there is no truth. To propose alternate images of the world is considered blasphemous. Born into this void, the band escapes their city. Guided by elders on the other side, they attempt to re-learn the processes and potentials of image-making, and to return this process to their homeland in order to free the image from the regime’s indoctrinating hold.

Already, we may detect traces of Marker, Bradbury and Tarkovsky. (Is this a new science fiction drawing upon the old, fashioning a future vision out of past future visions? No matter. Science fiction is always a reflection and refraction of its sources, and all the better for letting us see how.)

The conceit is that placing the making of images under the sole control of an authoritarian regime will increase the symbolic power of the image, its ‘divine hold’ over the populace. As the story of The Lensgrinders unfolds we must proceed on parallel tracks, as all science fiction asks us to do, engaging with its world and our own simultaneously, looking for the moments of overlap and divergence, of the probable and the improbable.

The model of symbolic power suggested by The Lensgrinders looks both forward and backward in time.  Looking forward, it seems to extend and extrapolate the logic of the image under the all too familiar order of neo-liberal corporate capitalism. The Googles, Amazons and Facebooks of the present, with their algorithms that make ideology perfectible, are the unspoken proxies for concentrated state power in the future. Looking backward, The Lensgrinders summons the spectre of George Orwell’s novel 1984, perhaps the defining science fiction allegory of the totalitarianisms of the first half of the twentieth century: fascism and communism. For Orwell, total surveillance is the technocratic equivalent of the inescapable voice, or eye, of God.

Why this Janus-faced look forward and backward? Early twentieth century fascism and communism mobilised the mass media technologies and platforms that had flourished after the First World War. Cinema, radio, illustrated books, magazines and posters. At the time, cinema and radio were consumed by the masses but not yet produced by them. Arguably, they had something of a ‘divine hold’. Still photography was different. It was already being marketed as a mass participatory medium. Whatever the state and the entertainment industries did with photography, you could do too. At least, it was not beyond the realm of imagination or possibility that you could do it too. In other words, part of the political power of state and corporate use of photography was that it was not remote from the citizenry. Its power was consensual, not coercive; a form of popular control, to paraphrase Antonio Gramsci and his theory of hegemony. The Lensgrinders proposes that if the masses lost access to the making of images and it fell solely into the hands of the state or corporations, the social and political power of images would be significantly strengthened, to the point of divine hold. But would it?

Is the symbolic power of the image, particularly the photographic image, predicated upon the illusion of access and participation; of it not being solely the tool of those in power? One can imagine a scenario that is quite the opposite of the one proposed by The Lensgrinders, in which the image loses its divine hold once the people have no access to producing images for themselves. Is it possible that the state or corporate shaping of desires and possibilities through photography would be meaningless to those without their own access to it?  If so, it would constitute the beginnings of the end of photography, or the end of one version of it. Of course, this is not a ‘fault’ in the logic of The Lensgrinders. On the contrary, the work puts itself forward not as a factual account but as a speculation or contemplation, of the future, present and past of the image.

In his celebrated essay ‘Kleine Geschichte der Photographie’ (‘A Short History of Photography), first published in 1931, Walter Benjamin described the beginnings of the medium as being shrouded in fog. He was half right, because even if the fog lifted there would be no beginnings in sight. The fog gives the comforting illusion that without it there would be something clear to comprehend. A point, an origin. But neither optics nor the capacity of light to transform material ‘began’ in any meaningful sense. The endings of photography ought to be approached in the same fog-shrouded way. For more than a century now, it has attracted various declarations of its demise. Cinema, television, Photoshop, the Internet, the networked camera, algorithms (the list is very much longer): each has announced the end of photography… but only according to its own measure.

There is no obsolescence of photography. All that becomes obsolete are versions, conceptions, uses, interests, and aspects of its distributive unity. In general, what is mistakenly thought of as photography’s obsolescence is better understood as its eclipse.

Eclipsed entities are not obsolete. They continue to exist in the shadows and the margins. There is always more margin than centre, more shadow than spotlight. Moreover, mediums often become more artistically, politically and socially significant when they are eclipsed. The Lensgrinders can be understood as an allegory of photography’s various phases of eclipse. It retraces the numerous moments at which photography was dislodged and redefined. The hybrid form of The Lensgrinders – almost literary, almost cinematic, somewhat digital, somewhat retro, somewhat futuristic – feels to me like the work of a mind backing into tomorrow like Benjamin’s Angel of History, picking through rubble of photography’s various past lives, sifting them like runes, looking for a way forward.

For the historical materialist, photography is understood as emerging as a symptom and tool of industrial capitalism in its imperialist phase. All the constitutive elements of the photographic procedure had been known for centuries – most notably optics and photochemical reaction – but communications technologies do not ‘evolve’ or ‘leap into existence’: they must be desired, no matter how inchoate those desires. (It is said that upon successfully sending and receiving a radio signal across the Atlantic ocean, Marconi spoke with a journalist who noted that now one person could now communicate with hundreds of millions simultaneously. This was a potential that had not occurred to Marconi, who had been focused on point-to-point signalling. For Marconi, radio was not broadcasting).

That tension (is it a dialectic?) between elements known for centuries and the absolute contingency of industrial-imperial capitalism is the source of an unpredictable artistic and philosophical energy in photography. The beginnings, which now seem to be shrouded in an even thicker fog, remain compelling today for conflicted reasons. Could photography have emerged at a different time, in a different cultural and economic situation? If human history were to be rerun, would photography emerge at all?

The imagining of manuals that could have existed but didn’t; the continued interest in all the techniques and materials that have been used to make and distribute photographs since the 1820s; the dreaming up of alternative societies in which photography is similar but different. There is, in our present era of networked/virtual cameras and violent capital, a continuous circling back to the fog, in a vital speculation as to whether photography could have taken other directions (which of course it still can).