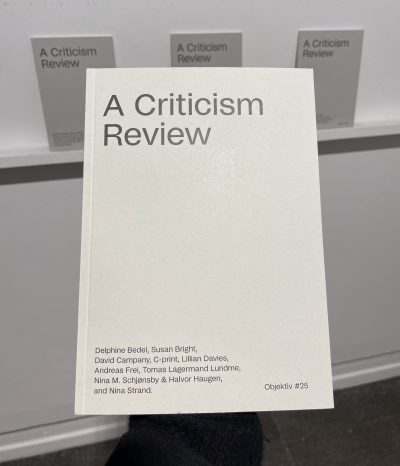 The essayist and psychotherapist Adam Phillips once suggested that psychoanalytic writing, from Freud onwards, but particularly Freud, should be read as a form of literature. That is to say, not as a claim to truth or science, but as a claim to literature. Asked for a definition of literature, Susan Sontag suggested it was writing that you would want to reread.

I read a lot of theory, but the only theory I reread are the texts I want to reread, and these I think of as also being literature. However, I would like to think that I have a wide sense of what literature is, and can be.  When reading, I keep my mind open for those unpredictable moments when a theoretical idea finds what seems to be a fully satisfying, or startling, or at least profound literary form.

People often complain about the way certain writers still seem to dominate theoretical discussions of photography, particularly Walter Benjamin, Roland Barthes, and Susan Sontag. I share that frustration. But do you know why their thought dominates where the equally significant thought of many others does not? It is because it was well written. Their writing stays with people as sentences, as modes of thought that found compelling written form, as literature.

Rereading a text has its own satisfactions. Not the least of these is the fact that we never read it the same way twice. In rereading, the emphasis, our emphasis, may fall somewhere else. In this sense, to reread a text is to measure one’s own changes – intellectual, social, political, aesthetic, critical, poetic – and in the process, we find that resonant meaning comes neither from the text, nor from us, but from somewhere between the two. This may explain why there is often a gap between the self-perception of ‘theorists’ and literary ‘writers’. A theorist is often hoping to ‘convey’ their theories, to communicate them unequivocally. A literary writer says “never mind if this is strictly true; is it interesting?” But if a text is interesting, that is a kind of truth. This is why Phillips suggests psychoanalytic writing be read as literature, regardless of the writer’s intention.  Freud the writer will outlast Freud the theorist, or even psychoanalysis itself. And perhaps Freud knew that.

‘Theory’ is often suspicious of the power of ‘literature’, seeing it as rhetorically sly in its way of not appealing to the intellect only. In doing so it often condemns itself to small and specialized audiences. This is why the idea of the ‘public intellectual’ is vanishing. But there were never that many public intellectuals, never that many who had found a way to give literary form to their theories. It is a very difficult thing to do.