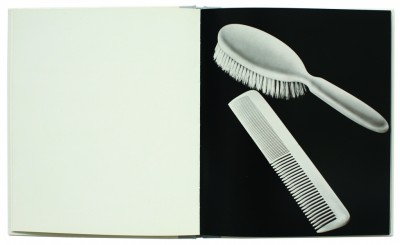 Comparatively little attention has been paid to photographically illustrated books for children.  They hardly appear in the histories of photography or children’s literature. This seems like an oversight. There have been thousands published, the earliest appearing in the first decades of photobook production in the nineteenth century. Many well-known photographers and designers have made or worked on photobooks for children, including Edward Steichen, Claude Cahun, Alexander Rodchenko, Bruno Munari and Cindy Sherman. Even if such books don’t merit serious consideration on their own terms, perhaps knowing something about the child’s engagement with the photographic image might tell us about something the ways adults engage with it.

Photobooks for children appear to fall into three rough categories: objects, situations and stories. Nearly all combine image and text in some way. Unsurprisingly, similar categories dominate the study of language acquisition in children (nouns, descriptions, actions). But I do not wish to be very scientific here. What follows is a rather idiosyncratic set of observations. They have emerged from looking at photographic books with the young children in my family and from the foggy memories of my own past.

I begin with an old book about objects. In 1930 Edward Steichen, then one of America’s best-known art and advertising photographers, was commissioned by his daughter to produce a photographic book for young children. Mary Steichen Calderone was a leader of the progressive school movement and wanted a book that would help them recognise objects. The First Picture Book, subtitled Everyday Things For Babies, has twenty-four black and white pictures and no text. Each presents a domestic object – telephone, toy train,  toothbrush and glass, clock, teddy bear, tricycle and so on. They are photographed in the slick style typical of 1930s studio photography. The objects appear with a heightened presence, their surface texture and sense volume exaggerated as if compensating for the fact that the objects cannot be touched or held.

Already we should pose the vexing question of whether young children should come to know the world ‘directly’ in the first instance and only secondarily through images (putting aside for the moment just how inseparable images and objects are). Steichen’s daughter was adamant that images should be secondary. She declared: ‘It is unwise for a baby to get his first experience of an object through the picturization of it. This may lead to a fantasy habit, or the formation of an incompleted image of that object, even when this is finally met.’  I’m not sure what to think of this. How bad could such a habit get? I look through my own sixteen month old daughter’s ‘object’ books. There are images of toys, cups, clothes, babies and food that are familiar to her. There are also lions, starfish and rockets that I’m pretty sure she’s never seen in real life. Moreover contemporary children’s books switch between photos of real things and photos of toy versions. They also switch between photos and drawings. One of my daughter’s books has a photo of a fierce lion roaring, another has a photo of cuddly toy lion while another has a hand-drawn lion. All have the word ‘lion’ written underneath. I wonder what fantasy habit she is developing about lions.

Steichen Calderone’s preface to The First Picture Book promotes the use of photographs on the basis that hand-drawn illustrations are ‘coloured by the artist’s viewpoint and personality, thus presenting a falsified image of the object’. But the book’s introduction by Harriet M. Johnson (Director of the Nursery School of the Bureau of Educational Experiments) claims that Steichen’s photographs are successful because they have the ‘simplicity of a line drawing’ while showing the ‘salient qualities without which the object loses its own identifying characteristics’. Clearly there is a contradiction here, but it is not an uncommon one. I sense it is as a symptom of the deep uncertainties about the photographic image that prevail still.

Photographs may be least problematic when they picture objects, but there may still be problems. The camera records everything before it. Objects come with backgrounds. Background is of course one key differences between photography and drawing. The camera records everything before it, at once, without hierarchy or distinction. Or, as the art photographer Lee Friedlander put it: ‘I only wanted Uncle Vern standing by his new car (a Hudson) on a clear day. I got him and the car. I also got a bit of Aunt Mary’s laundry, and Beau Jack, the dog, peeing on a fence, and a row of potted tuberous begonias on the porch and seventy-eight trees and a million pebbles in the driveway and more. It’s a generous medium, photography.’ Friedlander should know. He’s built an entire career out of wrong-stepping the viewer with visually confusing pictures that jumble foreground and background for the sheer joy of it. He could make a crazy children’s book.

What Friedlander calls ‘generous’ about photography others have called wild or anarchic. If photographs give you more detail, more information than you could ever want, making sense of them depends upon being able to organise your wants, to know what you should be looking for. Most of the time we are not very good at this and rely on titles, captions and commentary (the authority of the word) to guide us. Another way is to radically simplify the photograph by removing the object from its background. Steichen opted for simple studio settings but it soon became common practice to cut out the image-object so that its only background was the page itself. This is the norm today in photographic children’s books.

But there is still plenty of room for ambiguity. Which specific object will represent the general group? If you want to represent a car to a child, which car do you photograph? This is where the photo is potentially less suitable than a drawing. Consider the continued use of hand-drawn illustration in botanical books and other scientific representations of nature.  Here the aim is to produce an image that is representative of a species as a whole. The skill of the illustrator is not their artistic treatment of the subject but the judgment required to observe a range individual specimens and produce a drawing that averages their particulars into a useful guide-image. Similarly, pared-down pictograms are used for public signage because they can generalise concepts. Photography is unsuited to this because it is unable generalize. You cannot photograph ‘carness’. You can only photograph a car and the one you photograph may not be the most representative. It’s an interesting problem but perhaps not a big deal. A child is going to see a hell of a lot of representations of cars before its first birthday. It will be able average them just fine. (And it helps that all cars are starting to look the same anyway).

Narrating stories with photographs is not easy, as the large number of clunky failures in art testify. One of the most successful attempts, commercially and photographically, is The Red Balloon, Albert Lamorisse’s book of his short film that was an international hit in 1956. The book has been in and out of print ever since. Like all international hits its story is simple. A boy of about six (played by Lamorisse’s son) finds a red balloon. It follows him around, plays with him and becomes his friend. A gang of boys get jealous. They hound him and burst his balloon. Suddenly balloons from all over Paris leave their owners’ hands and fly into the air. In a swoop of magic realism they descend on the forlorn boy and carry him off over the rooftops. It is often described as timeless because it is an everyday tale of a child’s relationship to a transitional object, as psychoanalysis would put it. This relationship allows him get from one stage of psycho-social development to another. But what is striking is how in every other respect The Red Balloon is socially very specific. You cannot photograph a timeless story, because photographs will always be full of highly contingent information. The setting of The Red Balloon is 1950s Paris, in the picturesque quarter of Ménilmontant. There is barely anything postwar to be seen in the romantic imagery. Indeed The Red Balloon was one of dozens of illustrated books published in the’50s that cemented a quaintly nostalgic image of Paris for the popular imagination. It’s the one we see in the Parisian photos of Robert Doisneau, Henri Cartier-Bresson and many others.

Moreover the antagonism between the boy with the balloon and the gang is a drama of emerging class-consciousness. He is realising he is a petit bourgeois lad experiencing something special on his own, as do the young readers when they identify with him. By contrast the boys in the gang are depicted as if they already know they’re from the ‘wrong side of the tracks’ and must stick together. The Red Balloon is only timeless if you think this kind of antagonism is timeless. If my reading seems a little over the top have a look at Jean-Luc Godard’s and Anne Marie Miéville’s video interviews with young French children (France/tour/detour/deux/enfants, 1978). They are asked adult questions – What is money? What is work? What is fair? What is violence? Their faltering responses speak clearly of class ideologies taking root at an early age.

Come Look with Me (1994) by Jean S. Tucker has the subtitle Discovering Photographs with Children. This is unusual. Most children’s books use photographs to discover the world. This one promises to discover photographs. Alas it’s not a child’s guide to trawling flea markets. ‘Discover’ here means a visual training in looking at photographs. The twelve images chosen for the book are intriguing. Many are by famous photographers including Matthew Brady, Helen Levitt, Alfred Eisenstadt, Joel Meyerowitz and Diane Arbus. But the book finds it hard to address the photographs as such. Instead it opts to guide the child into retrieving information from them. Adopting the role of a sociologist is perhaps the easiest option when faced with a photograph. Arbus’ famous shot of twin girls (Identical Twins, Roselle New Jersey, 1967) prompts Tucker to write ‘Even though these sisters look very much alike, they differ in certain ways. Can you see any? If so, what are they? Do their clothes make it easier of more difficult to see the differences? Do you know any identical twins? If so, take their picture and discover the differences between them. If not take pictures of your brothers and sisters and try to find features that are alike and some that are different.’ This is followed by some notes for parents in smaller type. There is no reference to the complexity of Arbus’s imagery that even a child would sense. No mention of the unease or ambivalence many feel looking at her images. Instead Tucker makes the case for Arbus as a compassionate humanist who photographed every one as a unique and special individual, making her choice of an image of identical twins wonderfully confusing.

So, children’s photobooks are full of the paradoxes that plague the wider understanding of the medium. This should be embraced. Perhaps those elements of unpredictable wildness, of confusion, that are bound to creep into photographs are what make learning from them,  with them, or about them, worthwhile. And realistic too. After all when we grow up it’s not as if we enter a world of certainty about how to make sense of photographs.