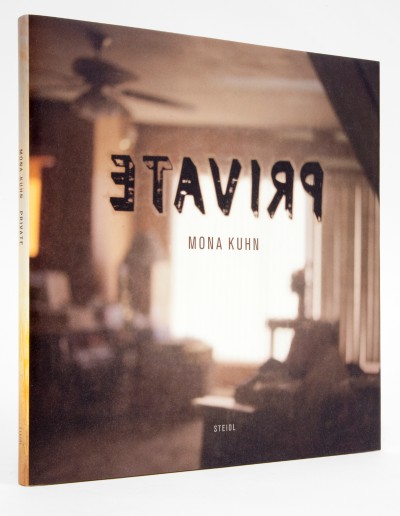 ‘Stardust’ is an essay written for Mona Kuhn’s book PRIVATE, published by Steidl, 2014.

Photography people like coincidences. Maybe it’s because we work with fragments. Pieces of jigsaws with shapes we must invent and coherence we must divine.  I first met Mona Kuhn in Göttingen, Germany on a wet Spring Day: far, far away from the desert settings of ‘PRIVATE’. We were in the library of Steidl, her publisher for many years now. Mona was absorbed with making small but significant changes to the sequence of the book you are now holding. Very little of any worth has been written about the way a book of pictures comes into being, and I shall not attempt to demystify the process here. However, I will say that when I saw that she was also reading T.S. Eliot’s Four Quartets, I sensed Mona knew a thing or two about fragments and the never-easy task of bringing them together.

She asked me what I was working on. It was a book and exhibition to be titled A Handful of Dust. Mona looked up with alert eyes. “Yes”, I said, “as in ‘I’ll Show you fear in a handful of dust’, from Eliot’s The Waste Land.” And in the Four Quartets Eliot ponders: ‘But to what purpose,  Disturbing the dust on a bowl of rose-leaves,  I do not know.’

We looked across the pages of this soon-to-be book. I stopped at the only photo she had not made in the western deserts of America. It is a shot of a computer screen showing a Google Earth image of California City, a planned but unrealised urban development. Roads marked out in the dust for a civilization that never really came, seen from a camera orbiting miles above the desert. “The Waste Land was published in England, in October 1922” I said. “The same month Man Ray published in Paris a strange photo of dust gathering in the New York studio of Marcel Duchamp. It was described on the page as a ‘view from an aeroplane’.”

As we talked, light northern European raindrops pattered the window of the library. Outside, the trees dripped and moisture hung thick in the air. Looking up we saw heavy sky. Looking down we saw Mona’s photos laid out before us. The difference could not have been starker. Scorched earth, in blistered yellows and oranges. Flaking walls. Thirsty plants. Birds and lizards on the edge of survival. All interspersed with the very living flesh of women. How strange to be looking at such images so far from where they were taken. But of course distance is essential for putting things together.  “My poetry wouldn’t be what it is if I’d been born in England and it wouldn’t be what it is if I’d stayed in America. It is a combination of things,” said Eliot in 1959.  I sensed something similar in Mona, her sensibility a mix of European and American influences (she was born in São Paulo, of German descent, and lives in Los Angeles).

For one reason or another, in the evening after meeting Mona and first seeing these photos I watched on my laptop 3 Women, Robert Altman’s 1977 film set in a small and dusty California suburb.  It is a story of inexplicable relationships. Three very different characters intertwine and become co-dependent, but they cannot really grasp how or why. It might be empathy, envy, or kindness, cruelty, longing or loss. With that lucid logic we first experience in childhood dreams – and glimpse again if we’re lucky in great movies and picture books – the three women switch places, each taking up the life of one of the others. The oldest of the three is a mystic who paints murals out in the desert. Her face is etched by unforgiving light and bone-dry earth. Her hair is a tangle of long strands thickened by wind and sand. She barely utters a word in the whole movie.  Is she the source of all the shifting? As the film finished I fell asleep, re-dreaming its already fractured story with Mona’s pictures mixed in. Freud called it ‘the days residues,’ those bits and pieces of waking life we carry into sleep and weave into something new. Picture editing is such a mystery.

The next morning I returned to the library. Mona was there with her sequence. She could not find the right position for the photo of the naked woman with the mane of wild greying hair. There she was, distant and resolute, lost and found. I tell Mona about 3 Women and I realise it is this bold yet elusive photo that had prompted me to watch the movie.  We look at the photo together. “It’s hard to find a place for her” says Mona. “She has the pioneer spirit. The spirit you need to live in the desert.” The mute woman knows exactly where she belongs but she’s not telling Mona quite yet.

“Remember, we live next door to the ocean, but we also live on the edge of the desert. Los Angeles is a desert community. Beneath this building, beneath every street, there’s a desert. Without water the dust will rise up and cover us as though we’d never existed.” So warns a character at the beginning of Chinatown, Roman Polanski’s film about water and corruption in the hot heart of California. I wonder what it must be like to live in Los Angeles knowing this. Does it make the place even less real, accepting the very grounds you stand upon could never support you?  Or does this artifice sharpen the senses and firm the grasp upon life? Does it focus one’s attention on what it is we need to survive and make a life worth living?

The desert is not for the weak of heart. In 1849 Francis Parkman warned that in the deserts of the American West “the whole fabric of art and conventionality is struck rudely to pieces.”  In 1901 Frederic Remington described how the glaring light of the Southwest collapses the near and far into one plane, scrambling perspective. That light will unnerve any visitor who arrives unprepared. In the attacking brightness our pupils contract to cut down the light but in doing so they render all distance crisp, pin-sharp. As the eyes move from a rock at one’s feet to the distant horizon there barely feels any change in focus: all close and all distant. In the 1930s Georgia O’Keefe – painter of deserts flat and deep – came to know this phenomenon. She talked often of what she called the “Faraway Nearby” and her canvases expressed it.

And this is the photographer Lee Friedlander relating his experience in the Sonoran Desert in the 1990s: “From a distance it is as tranquil as any other landscape, except for the light. As I get close the place becomes wild. Everything in sight is up-tempo and jumping with a thousand branches, a million thorns shaping the edges of cholla, saguaro, and ocotillo, and mesquite and palo verde, altogether becoming a maze of order new and crazier in every turn, bathed in light that defies description… My eyes would become sore from the light… It’s a place, the desert, out of control in the norm of places. One’s vision is pleasured in the extreme of the place. It’s a wonderful, awful, seductive, alluring stage on which to be acting out the photography game.”

So try to picture Mona going from her home in Los Angeles into the desert. Hypnotic drives from the continent’s edge to the interior.  She did this for half of 2011, all of 2012 and the first months of 2013. To Joshua Tree. The Mojave Desert. The Painted Desert. Staying in friends’ houses, sometimes camping, the trips would last from a few days up to two weeks. In the desert there are pictures everywhere. It is a profoundly photogenic place. Not only does it appeal to the camera, it is hard to see the desert as anything other than image. This is partly because we have seen it in so many images, but more profoundly images are a short-cut when places are difficult to comprehend. It is far easier to understand a photo of the desert than the desert itself.  And for this reason what most visitors bring back are the images they expect to bring back. How then to use a camera to get beyond the obvious, beyond the immediate image? How to approach what is truly strange, beautiful and disorienting about the desert?

At times Mona Kuhn takes the challenge head on, making views of crystal clarity in which light and land are one.  At other times she prefers a wide aperture and a shallow depth of field for her photographs. This seems to resist the hyper-lucid power of the desert’s glare. These are crepuscular visions, seen and photographed before the light has reached its zenith or after it has passed. Early mornings, early evenings and the moments of respite offered by shadows and sequestered interiors. The desert’s seductive threat is always there of course. It menaces from the edges.  Look at the signature image of this book, a dusty room glimpsed out of focus through a glass door bearing the words ‘PRIVATE’ in reverse.  A view of sultry enigma, a chamber beyond which the brightness of the sun is coming to devour everything and take the mystery with it.

And what of these women – aloof, drifting and drowsy?  Like the desert itself they invite presumption and brush it aside. Is this dream work, wish, or something else entirely? A world to visit or a state of mind? It will not give up its secrets easily, or ever.  What photographs show they cannot explain. We are in the realm of suggestion. Hard fact and hallucination.  In other words, poetry cannot be paraphrased, or even translated. So, let’s hear Eliot once more: “At the still point of the turning world. Neither flesh nor fleshless;  Neither from nor towards; at the still point, there the dance is,  But neither arrest nor movement. And do not call it fixity,  Where past and future are gathered.”