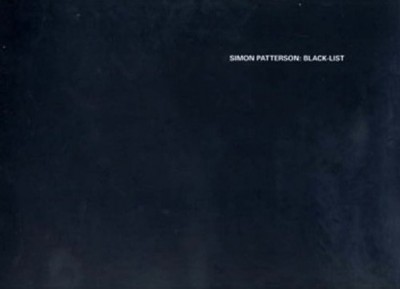 The End. An essay on Simon Patterson’s ‘Black List’ by David Campany

How does a film come to an end? It may be more complicated than we might presume. Think of a typical experience in your local cinema. The average film actually has a sort of compound ending, made up of several parts that are carefully choreographed. Firstly, the plot of the film will resolve, more or less. The arrival of the words The End will then confirm this for you. Rarely do the words themselves introduce the end – that would be too sudden. In effect, the words are already the second ending. They will appear in the centre of the screen or rise from the bottom. What we see may be accompanied by a change on the film’s soundtrack to what Hollywood calls ‘exit music’. This is music that seems to belong to the film but also seems to come from outside of it, like a commentary or Greek chorus. The end credits will follow.  As the final words of the credits leave the frame a black screen will be left behind. As this is happening curtains will close across the screen. We are never permitted to see the final frame of celluloid pass through the projector’s gate – that would be too ‘material’, too anti-illusionist, and too hard on the eyes. As the curtains close, lights will illuminate the auditorium. This is usually gradual and slow, but not as slow as the dimming of the lights at the beginning of the film. By this time most of the audience will have left their seats, if not the cinema. Perhaps a few will remain for a short while. Finally, if you are still there, an usher will ask you to leave. Which of these micro-events is the ‘real’ ending? All of them and none of them.

A film’s end credits are an example of what Gérard Genette has called a paratext. Paratexts are those supplementary bits and pieces that surround a work. They are not strictly speaking parts of the work but they frame it for us (like the art catalogue essay frames the art, like the gallery frames the art). They give it a place, an order, a set of conventions and boundaries, and to some extent paratexts determine how we approach the work itself. Genette’s interest was neither film nor art but literature. He looked at all the possible paratexts we might find around a typical novel. In near endless detail he considered book jacket design, titles, author’s photographs and biographies, publisher’s logos and notes, graphic design, quotes from reviews, colophons, the ISBN and barcode, prefaces, the contents page, dedications, chapter titles and even the words The End (which few novels have). These are just some of the paratexts within the book itself. To these Genette added others that influence from a distance – publicity, reviews, gossip, recommendation, the author’s reputation and all the rest. So much for a work “speaking for itself”. We can imagine the dozens of paratexts that surround a film.

End credits mark the transition between the film’s celluloid paratext, the paratexts of the auditorium, and the paratexts beyond in the culture at large. The purpose of end credits is twofold. Firstly there is the pragmatic and even ethical need to ‘credit’ those who made the film. Then there is the psychological function. End credits help to smooth the audience’s passage from the world of the film to the world outside. The audience suspends its disbelief in order to immerse itself in the filmic illusion. End credits help to bring the film back to a prosaic level while bringing the viewer from one mental state to another. You cannot see a film as an illusion and as a material object at once. It requires either a sudden jolt or a gradual transition from one to the other. This is why certain strands of avant-garde cinema became obsessed with trying to demystify the illusion, with self-reflexive shock tactics and alienating tricks.  It is also the reason why even the most basic closure of a movie in the cinema is made up of all those incremental transitions. Like sleepwalkers, we must be awoken gently or not at all.

Of course it is not always like this. Sometimes we want to be ‘in’ the film long after it has ended. The film’s closure and our closure are not quite the same thing. We may sit there in denial or reflection, giving our mind and body the time they need to make their own transition. We may read the end credits, out of interest, guilt, respect or merely as something to keep doing with our eyes. We may take the darkness that accompanies end credits as a subdued period of grace (they are invariably white-on-black, not black-on-white, and thus the movie theatre remains darkened at this point).

In his little essay ‘On Leaving the Cinema’ Roland Barthes describes his own body as it moves from the auditorium to the street. It is “a little numb, a little awkward, chilly…sleepy, soft, peaceful: limp as a sleeping cat.” We can pull our body from its seat but we might remain in a dream state. Sometimes we never quite sink into that semi-somnolence to begin with. At the end of a bad film we take our first cue to leave without hesitation.

Conventions are there to be broken. At the close of The Birds Alfred Hitchcock withheld the words The End. Moreover the film’s narrative refuses to resolve. The car containing the lead characters creeps through the menacing mass of birds until the sudden appearance of the Universal Studios logo across the screen. No end credits, no words at all, just a fade to black. And no ‘exit music’. It is disquietingly abrupt. It is not even a cliff-hanger. The film does not end; it just stops. The reassurance of the words The End lies not just in their signalling that the film is over. They provide an official voice letting us know ‘this is how it is’. The non-ending of The Birds is more radical than the notorious ‘bad’ endings of Hollywood movies from the 1970s in which the good guys die.  It is more radical than non- or anti-narrative films. Just as there is no warning that harmless birds will turn on the characters, there is no warning that the filmic conventions will turn on us. Or perhaps there was. The ending echoes the paratextual subversion of the film’s pre-release poster which read: The Birds is Coming.

At the other end of the scale there is the long end credit sequence. The record is currently held by the second in the Lord of the Rings trilogy. Nine minutes and thirty-three seconds. No doubt there were fans who watched right to the end. (What is a fan if not someone with a greater appetite for the paratexts than the rest of us?) No doubt many people worked on the film, but at nine and a half minutes it suggests the director was less interested in ‘credits’ than in being sure his film went on much longer than the audience. It says:  ‘The Lord of the Rings is epic – it has more than you can take’.

What about film and video in art? End credits are quite unusual in the gallery. They are not a conventional paratext of the ‘Artist’s Film’. Certainly some make their films alone, justifying art’s stubborn insistence on the singular author-creator. Others opt for looped films without end or beginning, avoiding the problem of credits all together. Or the credits may appear in other places: on an adjacent wall, in a gallery leaflet or in a catalogue.

The monochrome casts a long shadow over painting. Sooner or later every painter must make their peace with it. Painters work in the knowledge that the monochrome is a permanent fixture on the horizon of options.  Once the blank canvas and the black canvas were accepted as art, every painting thereafter would be a painting on a painting. For the weak-hearted the monochrome represents the end of painting. The bold  see in it new beginnings writ large.

Simon Patterson is bold and writes large on his monochromes. And the writing we see here speaks of cinema. The flat blackness his Black-List canvases speaks of art, of modernism in transition between the painterly surface and the industrial surface. The writing – so clearly cinematic – introduces what they used to call a ‘double articulation’: the already ambiguous black rectangles oscillate between canvas and screen. Their size is equally in-between. As ‘movie screens’ they are small, as canvases they are large, alluding to that strange hybrid: ‘home cinema’. Moreover look closely and we see the letters appear to glow, mimicking the bad transfer of big screen celluloid to TV screen.

Hollywood is deeply anxious about endings. If a film gets bad notices in preview screenings it can trigger an eleventh hour crisis. Editors may be called upon to reshape the final minutes. Cast and crew can be obliged to reshoot. The irony is that our memory of films rarely hinges on their endings. Indeed the memory of film follows the dream logic of displacement and condensation. Isolated fragments are recalled, scenes are mentally stitched together out of order, moments and actors from different films may find themselves combined in our minds. Patterson displaces and condenses different names and films. One painting looks like a credit list from Martin Scorsese’s ‘mob story’ Goodfellas. Almost. Scanning the others we may pick up names from the Cold War anti-communist tribunals.  Those witch hunts led to a Hollywood ‘black-list’ of banned writers, directors an actors.

The old Cold War has been replaced by new wars and new paranoid fantasies. They are fuelled in part by the expanded realm of visual representations that now seems to govern political thought. This may be why we are seeing a tentative return to political filmmaking at the edges of Hollywood. It may also be why ‘the political’ has returned equally tentatively to contemporary art. Our political present is haunted in so many ways by history. Our cultural present is similarly haunted, not least by the history of film and the history of art. It makes it all the more pertinent to look at the deep connection between looking back and the return of the repressed. After all, the repressed always returns out of place, just when we think things are over.