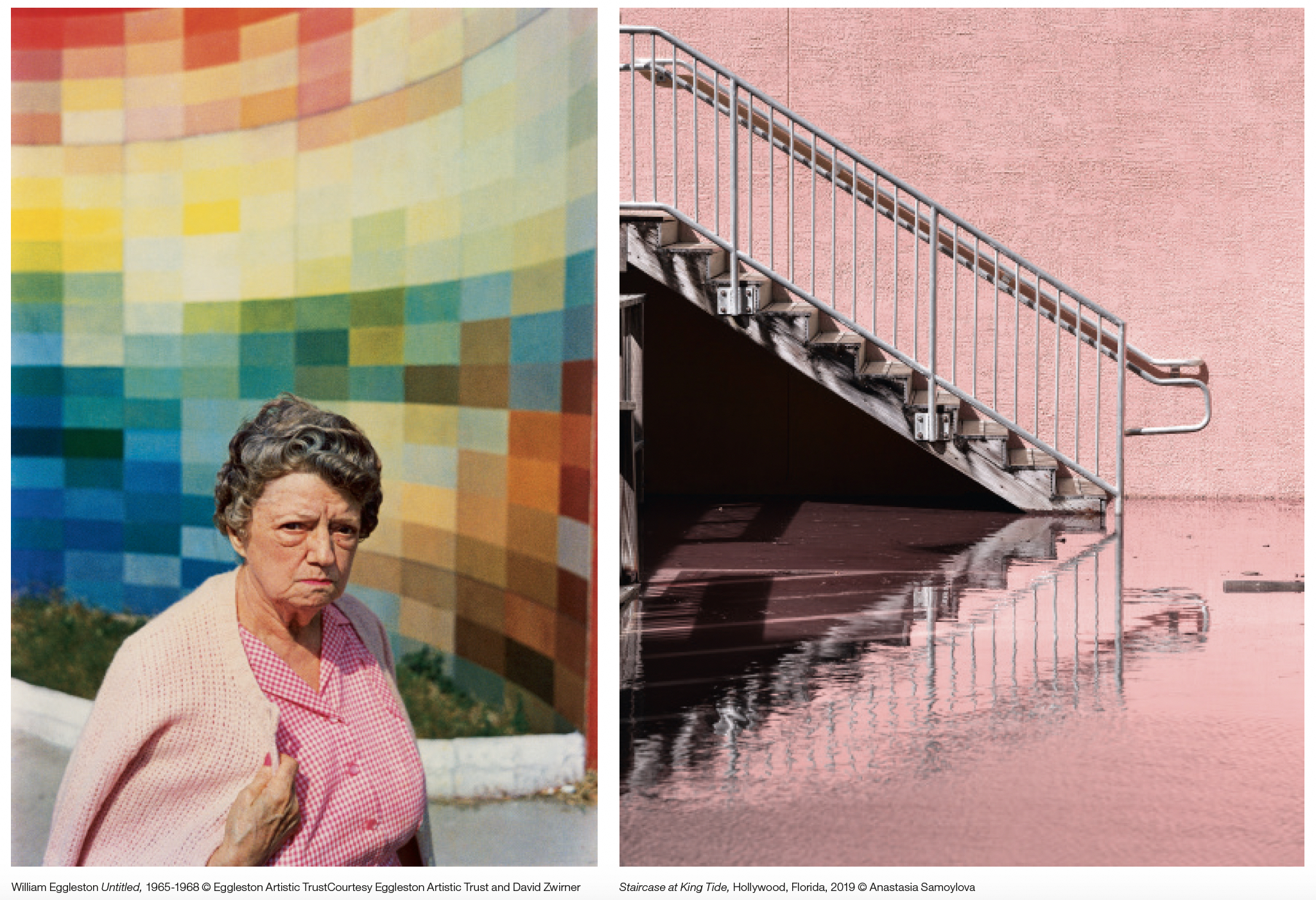 Here are some thoughts about colour, black & white, and pink in the photographs of William Eggleston and Anastasia Samoylova.

In the twentieth century, several difficulties slowed the artistic development of colour photography. Firstly, it was for a long time notoriously tricky to print colour with any nuance. While negatives and transparencies captured colour with great subtlety, print technology was limited. It was almost impossible to control contrast and saturation, although many photographers adapted their art to the limitations and made fine work. Only the expensive dye-transfer process offered prints that came close to the full richness.

Secondly, black & white photography preceded colour photography. The habits and criteria for art photography were first formed in relation black & white, and were entrenched by those who could not see beyond colour’s association with commerce and entertainment. The photographer Paul Strand went so far as to claim that: “higher emotions cannot be communicated in colour.” The sentiment would have sounded ridiculous to painters like Hilma af Klimt, or Nathalia Goncharova. The supposedly greater seriousness of black & white was also present in magazine photojournalism, which remained distinct from the pages of colour advertising well into the 1950s.

Thirdly, black & white and colour are not opposites. The relation is not symmetrical. A colour image contains a black & white version of itself, but not the other way around. In the digital era, all the colour can be removed from an image at the touch of a button. Adding colour to a black & white original is painstaking, and akin to painting.  When colour first became widespread in cinema, in magazines and then in domestic snapshots, it did indeed feel like an addition. The critic Roland Barthes felt that colour was “a coating applied later on to the original truth of the black-and-white photograph […] an artifice, a cosmetic (like the kind used to paint corpses).”

Lastly, the meaning of colour is unstable and difficult to define. What does a red umbrella in a rainy grey street mean? Or the blue of a car? Or the pink of a cake? The presence of each can transform a scene dramatically, without any particular meaning. Observational photographers, especially those working in the post-Second World War consumer societies, had to confront colour not as something extra, not as a layer on top of black & white, but as something fundamental. Colour is intrinsic to the world. The photographer William Eggleston was not the first to grasp this, but it is his work that has had the greatest influence on subsequent colour photographers, curators, critics and the public. Of his image Memphis (1965-68), he has said:

“It’s of a place in Memphis that’s long gone, and I was entranced by what she was wearing – her sweater and dress, light red and white – and how the colour of her lips and fingernails went beautifully with those colors. The wall – those multicolors – is just incidental.”

In the flow of daily life, a reactive photographer cannot look at everything. Eggleston gazed through his viewfinder at the clothes, lips and nails in shades of pink, the overall composition, and quickly pressed his shutter. That glorious colour grid could well have been incidental. The fact that her hair, right in the centre, would look almost the same in a black & white photo may have been incidental too. But neither are incidental to the resulting picture.

Naturally occurring pinks (think of flower petals, exotic bird feathers, or blushing white skin) are signs of vitality. By contrast, the man-made pinks of buildings, clothes, nail varnish and cakes, revel in artifice. They are sugary, frivolous, ingratiating, and ‘fun’. That is to say, man-made pinks are always a little camp. When Susan Sontag defined camp as ‘seriousness that fails’, she wasn’t thinking about pink things, but she could have been. Pink is always in danger of trying too hard, as if a thin coat of pink paint or pink-dyed fabric is enough to make something happy, or genuinely joyous. Things shouldn’t appear to be having more fun than we are, but pink things often do, and we often notice. So, pink always threatens to become its inverse – from upbeat to melancholy, from sincere to manipulative, from beautiful to ugly. And maybe this is why pink goes so quickly from being the stereotypical colour of choice for little girls, to being the ironiccolour of choice for adolescent girls.

Anastasia Samoylova has photographed various pinks in the southern United States, especially in and around Miami, Florida. It is a place renowned for its pastel colours. The famous Art Deco architecture, with its characteristic mix of baby blues, dusty yellows and powder pinks, screams ‘retro-leisure’. In truth however, most of the city’s modernist Art Deco edifices were originally white, the default non-colour of architecture’s International Style in the 1920ss and 30s. It was only in the 1980s, when Miami’s reputation for cocaine-fuelled gang violence threatened to scare all tourists away, that it got a colourful makeover. The man responsible for Miami’s new look was Leonard Horowitz, a furniture designer and window-dresser from New York. He helped establish the Miami Design Preservation League and got the city’s South Beach neighbourhood of Art Deco buildings into the National Registry of Historic Places. He also devised a new colour palette, and managed to pass it off as historically authentic. Given that barely a century ago southern Florida was swampland and almost uninhabited, it seemed there wasn’t all that much history to be authentic about. Besides, the region prides itself more on reinvention than continuity.

Samoylova’s fascination with pinks is part of her broader interest in the contradictions of the region. While it is the classic ‘tropical paradise’, Southern Florida is also at the forefront of climate change. Hurricanes are threatening more often and with greater force. Even minor rises in the sea level are causing severe problems. The place is very slow to adapt. The reality is finally being accepted, but there is not yet the will to do much about it. Miami is very rich but also very selfish, a land of individual pursuit more than collective ambition. It runs on fantasy and denial. Pink fantasy and denial.

In an oblique way, the pinks in Samoylova’s photographs express these tensions. They go from luxurious shimmer to moulding putrescence. In the heat and humidity even concrete constructions ooze mauve chemicals. Pink buildings expect to be bathed in sun, but in shade they look drab and humiliated, like a starlet without a spotlight.

Pink always feels depthless. Mere surface. Pure veneer. But that’s largely what Miami is about. We barely expect it to be anything other than superficial. Of course, in photography all we get is surface, or the impression of light bouncing off surface. This might go some way to explaining why pink is particularly photogenic. It is as thin as a photograph. And yet, its visual impression is so strong it can overwhelm the other senses. Here is Jean-Paul Sartre from his book Being and Nothingness:

If I eat a pink cake, the taste of it is pink; the light sugary perfume, the oiliness of the butter cream ARE the pink. Thus, I eat pink as I see sweet.

Seeing sweet. It is difficult to walk the streets of Miami without that feeling. Too much sweetness will rot your teeth, and perhaps your eyes too. But anyway, the place is rotting on its own. Nothing lasts for long here. Miami’s fortunes have gone up and down with the economy, and now with the climate too. And nothing looks more ephemeral than peeling pink paint.

Samoylova shot Pink Staircase during a king tide in Hollywood, an area between Miami and Fort Lauderdale. A flooded parking lot is observed as if it were a painting by Giorgio de Chirico, or a backdrop for a visionary movie. The image describes the space lucidly but there is something otherworldly about it. It reminds me of the final scene of The Truman Show (Peter Weir, 1998). Jim Carrey’s character is born and raised unknowingly in a giant TV studio the size of a county, and is filmed by hidden cameras his entire life, for a worldwide audience. Sensing all is not what it seems, he sets sail to escape, until his boat bumps into a painted sky backdrop. It is literally the edge of his world. Nothing had been authentic apart Truman himself. He climbs a staircase to exit the set, and enter a reality for which he is utterly unprepared. To me at least, Samoylova’s pink photographs, and Pink Staircase in particular, seem to push that colour, and the region’s investment in it, into heartbreak. Maybe it’s the relentlessness, the purging of almost any other colour from her frame. It’s the pink we think we want, but there’s just too much of it. I stare at it, and it stares back.

It is curious how in photography the term ‘monochrome’ tends to mean ‘black & white’, while in painting, it means ‘single colour’ (and black & white paintings have their own name, ‘grisaille’). Anastasia Samoylova is a digital native. She never went through that analogue stage of black and white preceding colour. Inkjet printing is her medium. I think this gives her more of a painter’s understanding of the term ‘monochrome’, with colour acute and alive. But colour is not something she takes for granted, and it is significant that her project Floridas contains a number of black & white images, which she seems to use quite consciously to evoke photography’s past, and Florida’s past too. For William Eggleston it was different, I suspect. His black & white work did precede his colour work. When the colour came, it was with a disturbing force. And I think it’s that sense of colour disturbance is what ties together the work of Eggleston and Samoylova, particularly in the pinks.