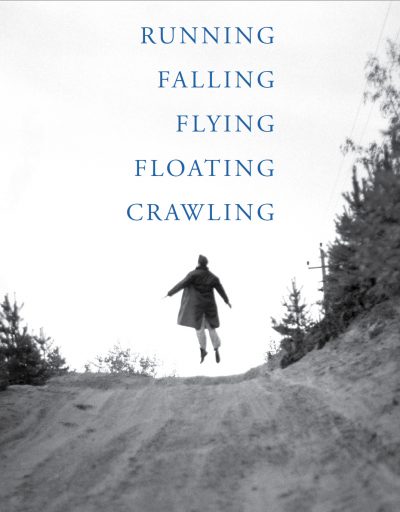 Running Falling Flying Floating Crawling is a loose compendium of photographs and texts that picture, examine, explore, and / or suggest the human body in states of abandon, helplessness, terror, subjugation, serenity, and transcendence.

In Film (1965), Samuel Beckett’s only film, Buster Keaton plays a solitary man deeply troubled by signs of his own presence in the world. They are a source of existential horror and he wishes to be rid of them, to disappear beyond all perception. To film such a story presents something of a challenge, since the very presence of an observing camera would seem to make the task impossible. Beckett turns the paradox into the film’s theme. Keaton is shot from behind so that the camera cannot see or be seen by his eyes (or eye, as it turns out: a patch makes him as monocular as the observing lens). He scurries past people in the street, avoiding their gaze. At home he sets about purging his room. He pulls down the tattered blind to shut out the sunlight, puts his coat over the mirror, removes from the wall a photo of a sculpted head with looming eyes, puts his cats out and covers the birdcage and goldfish bowl. Thinking he is truly alone, he sits down with a folder of photographs. Over his shoulder we see him peruse a set of images of his own life, from a babe in arms to a recent portrait. One by one he tears them up violently, stamping on the pieces. The photo of himself as a baby is on tough paper and difficult to destroy, as if it were the last stubborn proof. He slumps back exhausted, only to catch sight of the observing presence behind him. Startled, he confronts it, but instead of seeing the camera, he sees another version of himself, in counter-shot, smirking imperiously as if it is he who has been watching himself. The cruel moral of Film is revealed. We are doomed to live with our own self-awareness. The more traces we destroy, the more acutely we sense ourselves. Horrified, he covers his eyes. As his hands drop a close-up of an eyelid fills the frame. The lid lifts, the eye stares into the camera, and Film ends.

I think of the Californian artist John Divola as a kind of Beckett of photography. For nearly five decades he has conducted his own offbeat, existential exploration of marginal spaces, overlooked themes and unlikely actions. He has broken into disused buildings to vandalize them artily before photographing his activity. He has made infinitely detailed mural-size photographs of un-heroic landscapes in which he is the sole figure.  He has photographed dogs manically chasing his car in the desert. He has even made photographs in response to Jean-Paul Sartre’s existential opus, Being and Nothingness.  It could easily be a melancholy body of work, were it not for Divola’s endearing sense of the absurd and his disarming knack for getting at profound ideas about images and human experience.

As far as I could get is his simplest and most affecting work. He puts his camera on a tripod, and frames a vertical landscape. He then sets the self-timer to ten seconds, presses the button, sprints toward the horizon and…shoots himself in the back.

We can presume Divola has to run for what feels like more than ten seconds, to be sure he captures himself on the move.  We can presume he then stops, recovers his breath, and trudges back to his camera. Perhaps he repeats the action for another attempt.  Shooting on film, he cannot see the result there and then. Back in the darkroom, the film must be processed and the prints made (there are twelve images in this little series, made in different locations). Only in the prints can the artist see the evidence of his lonely anti-selfies. However fast he runs, and however far he gets, the camera will always stop him in his tracks.

Many of the big questions are here. Life’s purpose. Men’s purpose. Death. Nature. Loneliness. Time. The gaze. Divola knows his medium inside out, and wears the knowledge lightly. He is sure enough of what he’s doing not to belabor this little work, not to make too much of it. The simpler the gesture the more effective it is. As if it just happened.

Photographs have a way of covering their tracks. They show you what things, people and places look like, and they show you occurrences, but they rarely account for themselves. A photograph of a person sneezing will never tell you how that caught the cold. It is tempting to think As far as I could get might be an exception, that it is an image of photography recording its own condition, its own process, explaining itself. But it is the title that does it.  It is just enough to let us in on this solitary ritual. We were not there, and yet we feel we were. Our proxy witness, the camera, has made it possible.

If Samuel Beckett had been a photographer he might have made something like this. And I think he would have appreciated the title. As far as I could get sounds like a lost play.