Photography and the Present 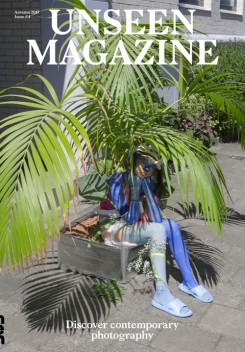 ‘Photography and the Present’, an essay commissioned for the 2017 issue of UNSEEN magazine.

I have been invited to write something about photography in 2017. The “current state of the photographic medium” to be precise. Defining its nowness, or even its newness has been part of the way photography has been thought about almost since its beginnings, and for good reason. It changes. But I sense there is a growing feeling of suspicion about the idea of something as broad and varied as photography having a definable current state. Suspicion that the dynamics of technology, money and fashionable taste too often dictate what is thought to be significant. Suspicion that the emphasis on the now misses so much of what is most compelling about photography.

This isn’t to suggest that photography has no “current state”.  Far from it. If you are looking at a photograph, or engaging with a photographic project – be it in a book, magazine, exhibition or website – and it means something to you, then it is contemporary. It does not matter whether it was made in 1839, 1967, or last week. The extent to which an image engages you is the extent to which it is contemporary. This might seem a counter-intuitive idea, especially with a medium like photography, which usually requires the outside world of its present moment to leave its trace. “Surely”, you might reply, “photography is wedded to the present like few other mediums. Surely, in being so much of the present moment, any photograph immediately becomes history, and this itself is the guarantee that it was once contemporary and is no longer so. Surely, photography’s shifting technologies, platforms and methods of dissemination keep it new, and become ‘old’ as soon as they shift again.” None of this need be denied.  All images are contemporary because there is no such thing as time travel.

When is now, and where is here?

A manifesto from another era: One must be of one’s time. Thus demanded the writer Charles Baudelaire. His words became the slogan of the vanguard realist artists and writers of the second half of the nineteenth century. For the painter Gustave Courbet and his circle, for example, the demand to ‘be of one’s time’ represented not just an artistic calling but a commitment to a new way of living, a new way of being, a new way of attuning oneself to the world.  The demand was at once simple and multi-layered. Firstly, it implied that ‘one’s time’ was significantly different in character from the past, and from times to come. Indeed, it was in the nineteenth century that artists and writers first experienced in a deep and unavoidable way the rupture in continuity caused by modernity. Time was inconsistent, ‘out of joint’. Time did not simply pass, naturally: its deepest character was subject to change.  Secondly, it implied that the role of artists and writers was to immerse themselves in this new temporality and allow it to be expressed through them. Their task was not to look back, nor to resist the present, nor to predict the future. It was to grasp everyday experience in all its transient particularity.  Thirdly, being attentive to the texture and the grain of the present also implied being attentive to one’s location in the world. In effect, ‘to be of one’s time’ contained a second, unspoken demand that was just as significant: One must be of one’s place.

Even in the nineteenth century to know with any certainty the nature of one’s time and one’s place was not easy. In fact, the emergence of a particular desire for such knowledge, and for an art that would express it, was itself a response to the difficulty of defining and achieving it. After all, we tend to think we know what is particular about a time and a place only with hindsight. Perhaps we can only ‘be’ of our time and place without really ‘knowing’ it in the fullest sense.

In the century that followed, the task became increasingly difficult. Histories began to conflict with each other. Populations began to move. Cultures began to mix or clash. Revivals and revisions haunted the desire for the modern. Different orders of time and place began to assert themselves upon daily life in ways that could not be reconciled. Even finding a fixed position from which to consider the rapid changes was a challenge. Here in the twenty-first century we are trying coming to terms with the effects of that long period of instability, if only to prepare ourselves for the instabilities to come.

More than ever, we live in a world of ‘meanwhile’, of parallel lives, of contemporaneous existences. This is so whether we like it or not, whether we accept it or not.   We do what we do while knowing, or not knowing, or pretending we don’t know what other people are doing. Friends, relatives, factory workers that make your clothes and computers, fellow humans in North Korea or Syria.   Some people’s lives are more interconnected than others. Some attempt isolation, but you cannot unring a bell. The ‘meanwhile’ has become the greatest challenge to our sense of self as individuals, as communities and as global citizens. It shapes nearly every aspect of the visual culture we have made for ourselves. And even when it doesn’t shape the making of it, the ‘meanwhile’ shapes our engagement with it. There is always another image, another life, somewhere else.

False Angels of the ‘Zeitgeist’

At any given time in its history, almost every kind of photography has been made, and with every kind of attitude. It has always been an ‘expanded field’. In a medium so widespread, adaptable and available, how could it have been otherwise?  No single image form can characterize the era in which it was made. That was true right from the start.  Think of the range of pictures made in just the first few years of photography. There was everything from topographic views, portraits, and scientific studies to still life studies, copies of artworks and the theatrical staging of imagined visions. There were unique photographs and there were multiple copies. Some images were to be seen on their own, others were parts of larger projects. This range and variety made the writing of photography’s history almost impossible.  Nobody even attempted to do it until photography was reaching its centenary. When they did try, the audience was at first grateful for the illusion that a coherent story could be fashioned from such chaos. Today we suspect any established history of photography, just as we ought to suspect any attempt to define its present. This is why there’s still so much interest in photography’s past. Once you get beyond the famous images, it is far richer, and far more contemporary than we might presume.

The present tends to think that the problems it has, and the possibilities it has, are fundamentally different and far greater than the problems and possibilities faced by the past. The present always thinks it is special. Maybe it has to think that way. But one frustrating consequence is that the present cannot quite face its own complexity and wants quick definitions of itself. It wants a simplistic and flattering account of the uniqueness of its condition. In the ‘photography world’ we know what determines these quick definitions and where they come from. One: the economics of the art market, which demands ‘classics’, ‘forgotten masterpieces’ and ‘new blood’. Two: the technological determinism that insists photography’s present must be defined by the latest cameras and the most recent modes of image dissemination. Three: the unimaginative members of the cultural media who, looking over each other’s shoulders, come to nervous and haphazard conclusions about what’s hot and what’s not.  Four: the presumption that photography concerning matters of political urgency must be the most definitive of the medium’s present. Be suspicious of all these forces. Be suspicious of any notion of a ‘zeitgeist’ in photography, or elsewhere. Be suspicious of techno-utopians and techno-dystopians.  Be suspicious of the relation between money and cultural value. Be suspicious of the cultural commentary offered by the media. Including mine.