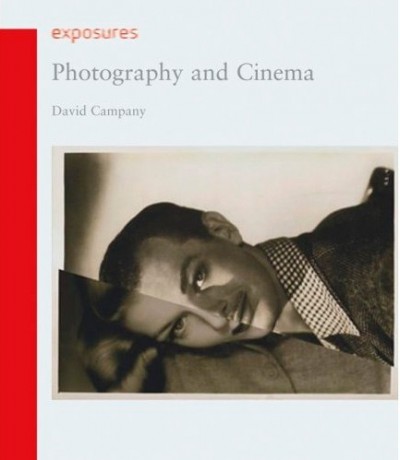 Winner of the Kraszna-Krausz Award, 2009

Photography and Cinema a considers the importance of the still image for filmmakers such as the Lumière brothers, Alfred Hitchcock, Michelangelo Antonioni, Jean-Luc Godard, Chris Marker, Mark Lewis, Agnès Varda, Peter Weir, Christopher Nolan and many others. In parallel it looks at the cinematic in the work of photographers and artists that include Germaine Krull, William Klein, John Baldessari, Jeff Wall, Victor Burgin and Cindy Sherman.

From film stills and flipbooks to slide shows and digital imaging, hybrid visual forms have established an ambiguous realm between motion and stillness. David Campany assembles a missing history in which photography and cinema have been each other’s muse and inspiration for over a century.

‘In Photography and Cinema, David Campany eloquently engages with the dynamic relationship between the still photographic image and the moving cinematic one. Through a series of compelling and enlightening discussions of each medium, Campany asks us to consider how they have responded to and mediated – or been mediated by – each other, and how they engage with subjective acts of seeing and being seen . . . an elegant and illuminating overview of the way these two media continue to speak to, and about, each other.’ – Times Literary Supplement

‘Campany suggests that while cinema’s relation to photography is often covetous, it is also affectionate. Film may be the dominant medium, but it is nevertheless in thrall to photography; Photography and Cinema doesn’t overstate cinema’s supremacy, but it does suggest that, where and when it surpasses photography, it also lovingly enshrines it.’ –  Art Review

‘Charming, erudite and unpretentious, richly illustrated and elegantly laid out, sacrificing little to the academic conventions of the field.’ – Film Theory

‘A perfect introduction to the debates about the relationships between the moving and the still image in photography and film.’ – Historical Journal of Film, Radio and Television

‘An important contribution to recent debates on the reciprocal influence of the two media. The courage needed to undertake such a vast project, embracing more than a hundred years of common history, numerous social uses and cultural contexts as well as various theoretic approaches, commands deep respect . . . the book provides an insight into central aspects of its subject matter, it gives numerous hints to relevant theoretical debates and offers insightful analysis of films, illustrated books, photo sequences and single photographs.’ – Image and Narrative

‘immensely readable; its clear, flowing prose and structure is enjoyable to read’ – Scope

‘A very accessible, jargon-free, and nicely designed introduction to a nearly inexhaustible reservoir of interesting source material and themes . . . What Campany’s work should mainly be praised for is that it bridges towards a larger audience.’ – Camera Austria

‘Photography and Cinema is an exemplary sort of book. David Campany writes extremely well and he provides lucid insights on every page. Accompanied by beautifully produced images, his text is a journey through the development of cinema and photography and their effect on each other. Modest and succinct, it is exactly what you want a book on this subject to be.’ – Mike Dibb

An extract from Photography and Cinema appears in Adam Bell and Charles H. Traub, eds., University of California Press.