Between Art and Function. What purpose does a photograph serve? 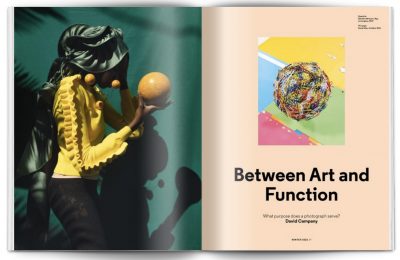 Aperture’s Winter 2022 issue ‘Reference’ considers the role images play in the creation of something else. Spanning fashion design, architecture, film, and print, the artists featured in this issue borrow and quote from their source material to create transformative works that are all their own.

Between Art and Function. What purpose does a photograph serve?

Look at these two images, one by Daniel Stier, the other by Djeneba Aduayom. They appear here in a photography magazine, so you may ask where they came from and what their original purpose was. Or you could just enjoy them for what they are while not quite knowing. As it happens, Stier and Aduayom are artists who make images for themselves, and also accomplished commercial photographers who receive assignments from magazines and websites—editorial work that gives them a lot of creative leeway. So, there’s not a world of difference: the commissioned work is quite similar to the art they want to make anyway. In his exhibitions, Stier mixes them up and doesn’t reveal which is which. When Aduayom sends me her images now and again, I think about their possible role in the world, but I don’t ask. It’s more fun.

What would be the most purposeful kind of photograph? And what purpose would it serve? A mugshot, a photo of a wrench in a tool catalogue, or a news or real-estate photo? Does a purposeful image have to look a particular way, or is it a matter of context, of putting the image to work? Is “art” purposeful, or is it something else? And what does art do to supposedly purposeful photographs? These are old questions, but they never age, because every photo is potentially useful and useless. It is a document and an artwork, a reference to something and an enigmatic thing unto itself.

Photography became a truly modern medium around a century ago, when it faced these questions head-on. Many canonical photographers of the 1920s and 1930s, from Eugène Atget, Berenice Abbott, and Walker Evans to Ihei Kimura, Germaine Krull, and Laure Albin-Guillot, made their art in the guise of photography’s applied vernaculars: documentary, reportage, fashion, advertising, architecture, portraiture. They frequently earned their living in those fields but had ambitions either to make work that was better than required or to pull their work away from narrow application, perhaps to make a book or exhibition. In that pulling away, a photograph’s purpose is suspended somewhat and made thinkable, and more open to interpretation. In the case of Atget, Abbott, wanting to present him as a modern master, oversaw the publication of a posthumous book of his varied photos of old Paris, while Man Ray bought images from him to publish in Surrealist journals for different reasons, with different effects. Other artists, illustrators, and designers also acquired Atget’s photographs and used them for reference. For all its artistry and sense of atmosphere, his work is full of useful details about what things looked like. A gate. A tree. A postman. A church. A street. A doorway.

When, in 1929, August Sander published Antlitz der Zeit (Face of Our Time), his book of sixty portraits of the German people, it wasn’t exactly clear who was buying it or what it meant to them. Was it sociology? Anthropology? Fashion? Political commentary at the onset of Nazism? Art? Design? Carefully observant, artistically restrained, and slightly inscrutable, Sander’s project compelled in the multiple frames of reference it invoked. Since then, it has been canonized in the history of photography, but this settles nothing, only deepening and intensifying the work’s multivalence. Years ago, I found a much-thumbed copy of the book in the library of Central Saint Martin’s, the art and design school in London, which didn’t have a photography program at the time. Ninety percent of the borrowers were fashion students, the librarian informed me. I have no idea if they had an appreciation of Sander’s photographic achievement, and maybe that didn’t matter. Maybe they just wanted to know how interwar Germans dressed or posed, or how fabric looks in black and white.

Even when artists have not been obliged to work in applied fields, they have made photographic work that is in dialogue with them. Think of the reworking of mass-media imagery by Pop artists and those of the Pictures Generation. Or Conceptual art’s playful prodding at the photograph’s status as truth or common knowledge. Think of Cindy Sherman’s critical mimicry of the film still. Christopher Williams’s arch remaking of industrial photography. Stan Douglas’s ventriloquism of mid-century news photos. Think, too, of the re-presentation of the archives of countless working photographers who were either typical or innovative in some way. A touchstone here is the influential collection of anonymous photographs that Larry Sultan and Mike Mandel gathered from institutional archives between 1975 and 1977, and published in the book Evidence (1977). Out of context, it’s comically unclear what the photos were intended to be evidence of. One can also think of how the varied documentary practices in art, from the lyrical to the more strategically allegorical, are reflections upon the genre.

These examples are broad, but they are all instances of reconsideration. Art becomes an operating table or a stage set to which photography’s applied vernaculars are brought to be thought about and appreciated in other ways. It’s hard to imagine the medium’s relation to art in the last century without this dynamic. (Put another way: is there an art of photography that has no relation to its non-art modes, that could only be art?)

Since even the most purposeful-looking photographs are pictures, they are never merely purposeful. They are always doing other things, and suggesting other meanings, unspoken or even repressed. They have an aesthetic charge. This seems to be the interest of the artist Carmen Winant. In her book Instructional Photography: Learning How to Live Now(2021), she pairs appropriated images with texts, reflecting upon what supposedly instructive photos do, or could do in a different setting.  There’s a long history of illustrated instruction books and a history nearly as long of artists’ interest in them. Artists see the art in everything, and it doesn’t take Winant long to point out that the boundaries are pretty blurred, not least because art photography has been flirting with non-art for generations now. Interestingly, the 1920s and 1930s saw a remarkable proliferation of illustrated instruction books, on everything from skiing and swimming to carpentry, cooking, and sex. This was also a period when editors as well as artists recognized the role of context in the shaping of meaning. An important early example was Ernst Friedrich’s polemic War Against War, first published 1924, for which he gathered all manner of images that had been supressed or censored or were never for public consumption. Some of the most powerful were medical photos of soldiers’ injuries, which had been made as reference documents for surgeons. In Friedrich’s hands they served to help end conflict. Even the most apparently straightforward image can be repurposed.

Plenty of art photography is also useful. If you wanted to build a wood-framed house, some of Walker Evans’s photographs would be a real help (in 1933, the Museum of Modern Art showed them in its architecture department). Constructing a water tower? Bernd and Hilla Becher made a whole book about them. They titled their first major publication Anonyme Skulpturen (Anonymous sculpture), and it was their passport into a world of art in which Minimalist sculptors were using standard industrial forms. But none of the Bechers’ subsequent publications made such an explicit claim; they were much more open-ended and ambiguous. Their photographs are art because they are also potentially not. Photography’s ascent in the world of art over the last century parallels art’s own questioning of what art is and does. It is not a matter of photography “fighting to be accepted.” It was accepted by being and not being art.

The last place I saw an August Sander portrait was in the book Photography RX: Pharmacy in Photography since 1886 (2017). His image Pharmacist (c. 1930) was an obvious inclusion, but there were many other images in the collection related only tangentially to the subject, such as artful still lifes of medicine bottles and famous street photos by Helen Levitt and Robert Frank with a Walgreens or Duane Reade deep in the background. Assembling that collection must have involved a hunt not just for photographs but within them. How you search determines what you find, and context determines how you see, although never absolutely. There is always wiggle room. Once, a friend who is a mechanic looked through my copy of Uncommon Places, Stephen Shore’s photobook of 1970s small-town America. The first thing he noticed was the large number of MGB cars parked on the streets. That’s not something a “photo person” may notice, but it is as valid a response as any to that book. The closer art comes to embracing the descriptive, the more its meanings open out. That might seem counterintuitive, but if it wasn’t true, the art of the last century would be profoundly different.

In 1967, the artist Victor Burgin typed the seemingly straightforward instructions for his work Photopath: “A path along the floor, of proportions 1×21 units, photographed. Photographs printed to actual size of objects and prints attached to floor so that images are perfectly congruent with their objects.” The card is not meant to be exhibited, but realizations of the instructions can be, and they must be made afresh each time. The instructions are plain and simple, but their implications run wild. Exactly how would you make Photopath, and what might it mean? The most literal things are often the most open-ended and mysterious.