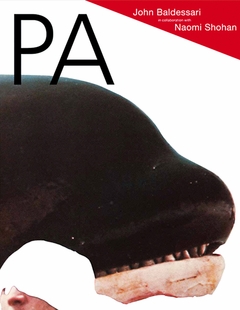 I co-founded and co-edit PA magazine with Cristina Bechtler. For each issue we invite an artist to select and sequence their own work over as many spreads as they need. They then choose a second artist who is invited to do the same.

John Baldessari invited an ex-student, Naomi Shohan to share this issue. Shohan works as a movie set designer. PA 3 combines new collages by Baldessari with stills from the films Shohan has worked on.

I contributed a series of quotations about editing:

I’ve got nothing to express! I simply search for images and I invent, I invent… only the image counts, the inexplicable and mysterious image, because all is mystery in our life.
René Magritte, 1951

The picture editor is the voyeurs’ voyeur, the person who sees what the photographers themselves have seen but in the bloodless realm of the contact sheet… and now pixels on the screen. Picture editors find the representative picture, the image that will be seen by others perhaps around the world. They are unwitting (or witting, as the case may be) tastemakers, the unappointed guardians of morality, the talent brokers, the accomplices to celebrity. Most important – or disturbing – they are the fixers of ‘reality’ and of ‘history.’
John G. Morris, 2002

I don’t like editing so I always try to fob it off on to someone else, whether it’s a picture editor or someone in my office. You’ll be surprised what other people can bring to your pictures.
Rankin, 2007

The essence is done very quickly with a flash of the mind, and with a machine. I think too that photography is editing, editing after the taking. After knowing what to take you have to do the editing.
Walker Evans, 1971

A successful photo is only a preliminary step toward the intelligent use of photography… Photography is like a mosaic that becomes a synthesis only when it is presented en masse.
August Sander, 1951

August Sander’s The Face of Our Time: 60 Photos of German People is more than a book of “type studies”; a case of the camera looking in the right direction among people […] It is a photographic editing of society, a clinical process.
Walker Evans, 1931

Sander’s work is more than a picture book. It is a training manual.
Walter Benjamin, 1931

The series is no longer a “picture”, and none of the canons of pictorial aesthetics can be applied to it. Here the picture loses its identity as such and becomes a detail of assembly, as essential structural element of the whole which is the thing itself. In this concatenation of its separate but inseparable parts a photographic series inspired by a definite purpose can become at once the most potent weapon and the tenderest lyric.
László Moholy-Nagy, 1932

The mingling of real life and imaginary life, of present and past, of probability and improbability, could only be expressed hitherto in surrealist poetry and by the technique of cinema. To-day it is one of the most powerful devices of the art of layout.
Alfred Tolmer, 1932

The photographic essay was born of the promise of another kind of truth from that given by the individual photograph or image on its own, a truth available only in the interstices between pictures, in the movement from one picture to the next.
Blake Stimson, 2006

…the quick nervousness of pictures is a new language.
Daniel Longwell, 1936

I am kino-eye. I am a builder. I have placed you, whom I have created today, in an extraordinary room, which did not exist until just now when I also created it. In this room there are twelve walls shot by me in various parts of the world. In bringing together shots of walls and details, I have managed to arrange them in an order that is pleasing and to construct with intervals, correctly, a film-phrase which is the room.
Dziga Vertov, 1923

Take photo after photo! Record man not with a solitary synthesized portrait but with a mass of snapshots taken at different times and in different conditions.
Alexander Rodchenko, 1928

Rodchenko’s entire floor was covered with piles of illustrated German and French periodicals: Junge Welt. Moderne Illustrierte Zeitschrift, Kolnische Illustrierte, die Woche, Die Frau, L’illustration .[..]. With scissors in hand he was jumping about the room like a circus gymnast, cutting out various figures, pages and headings, then placing them in piles according to themes such as animals, fashion, technology.
Zakhar Bykov, 1995

Lying on the floor trying to find likenesses from the hundreds of photos spread out in front of me…whenever I see an interesting photo of a personality, an animal, or whatever it may be, I put it in a box. Once a month when the printer is becoming urgent about material for the next issue I go into seclusion. I shut myself in a room and go over the pictures in the box. The pictures I like best I throw on the floor, then I go through the other boxes. I have got four of them. One is full of personalities, another of animals. The third is filled with women and children, and the fourth with landscapes and funny photographs. One by one I go through them – if I find a photo that would match one of the pictures on the floor, I put the pair aside […] I think there is always somewhere a photo which fits…believe me, the whole business is much easier than one thinks. …One only needs an eye to see the possibilities in a photograph, and one must have a good optical memory.
Stefan Lorant, 1940

The dream of a universal archive is the belief that a photographic translation of the unruly contingency of the world can result in a rational-organised-industrialised system (equivalent to money currency), which may function as a perfect means of exchange and commodification within capitalist social relations. Thus it facilitates processes of rationalisation, industrialisation and exploitation; as well as fostering the legitimation of the modern romantic-colonial nation-state system.
Jorge Ribalta, 2009

…diffusion is furthered by an ever subtler and more comprehensive outlook, whose effect is often to substitute for the masterpiece the significant work, and for the mere pleasure of the eye the surer one of knowledge.
André Malraux, 1949

…we should ask ourselves who would be truly richer- the one who possessed photographs of every surviving building of the classical age, or Sir John Soane, who had measured every stone of the orders of the Coloseum and could quote its intercolumnation even in his old age.
Reyner Banham, 1953

In Godard’s Les Carabiniers (1963), two sluggish lumpen-peasants are lured into joining the King’s Army by the promise that they will be able to loot, rape, kill, or do whatever else they please to the enemy, and get rich. But the suitcase of booty that Michel-Ange and Ulysse triumphantly bring home, years later, to their wives turns out to contain only picture postcards, hundreds of them, of Monuments, Department Stores, Mammals, Wonders of Nature, Methods of Transport, Works of Art, and other classified treasures from around the globe. Godard’s gag vividly parodies the equivocal magic of the photographic image. Photographs are perhaps the most mysterious of all the objects that make up, and thicken, the environment we recognize as modern. Photographs really are experience captured, and the camera is the ideal arm of consciousness in its acquisitive mood.
Susan Sontag, 1977

Thirty are Better than One.
Andy Warhol, 1963

Repetition is the simplest path to looking like you know what you’re doing.
David Campany, 2008

To look at a photograph beyond a certain period of time is to become frustrated: the image which on first looking gave pleasure by degrees becomes a veil behind which we now desire to see. To remain too long with a single photograph is to lose the imaginary command of the look, to relinquish it to that absent other to whom it belongs by right: the camera. The image now no longer receives our look, reassuring us of our founding centrality, it rather, as it were, avoids our gaze. In photography one image does not succeed another in the manner of cinema. As alienation intrudes into our captation by the still image, we can only regain the imaginary, and reinvest our looking with authority, by averting our gaze, redirecting it to another image elsewhere. It is therefore not an arbitrary fact that photographs are deployed so that, almost invariably, another photograph is always already in position to receive the displaced look.
Victor Burgin, 1980

…presenting groups or series of pictures.[..]. is a very well established way of imagining photography, a practice of photography — so established it is almost unnoticed. I notice it because I really cannot do it that way. I want each picture to stand on its own, with no sequential or thematic relationship to any other. At least, not any specific or organized thematic relationship.
Jeff Wall, 2008

What is the one picture I can take that will say ‘Vermont’?
Jack Delano, 1936

Design is absolutely no substitute for content.
Harold Evans, 2008

Perhaps true, total photography, he thought, is a pile of fragments of private images, against the creased background of massacres and coronations.
Italo Calvino, 1958

…in a world in which we are entertained from cradle to grave whether we like it or not, the ability to rework image and dialogue … may be the key to both psychic and political health.
Colin McCabe, 2004