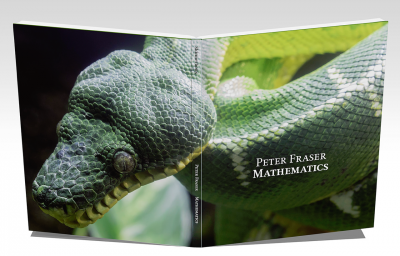 For his latest series of photographs, Peter Fraser was has been following the notion that the universe is governed by laws and principles that can be described mathematically.  This notion is not new. It preoccupied Aristotle and Pythagoras, and later Galileo. In our own time, as Fraser himself has noted, Max Tegmark, a Professor of Physics at M.I.T. has proposed that, fundamentally,“not only does maths describe the world we live in, it is the world we live in. If you grant that both space and everything in space is mathematical, then it begins to sound less insane that everything is mathematical.”

What does it mean that the world is mathematics? It seems to change everything, momentarily, if only to leave it all exactly as it was.  Does the realisation of the mathematical nature of all things merely “replace the village idiot with the village explainer,” as the philosopher Stanley Cavell once remarked? Or is there something more profound at stake? The answer must surely have something to do with our nature as humans (what else could we be?) We are able to contemplate the fact of the mathematical. And to contemplate a fact is to confront it, to understand it, hopefully,  but also to confront the fact that we cannot understand it, cannot grasp its full implications for us and our relation to it, cannot fully enter into it and still be human.

That is to say, contemplation involves a certain distance from that which is contemplated. As if across an abyss, or through a glass wall, we see what it is we wish to come to terms with, while knowing that the wish itself is what keeps us apart from it. The wish creates the abyss, builds the wall, so to speak. Call it consciousness. To be conscious of the mathematical fact of the world is to not quite be mathematical, to not quite be at one with it.  The die hard will of course insist that even this can be accounted for mathematically. Neurones.  True enough. But this too is a fact we can contemplate. And so on. It is a paradox of infinite regression that Zeno would have cherished.

Is there a place in a mathematical understanding of thnigs for those attributes that make us human? Desire. Curiosity. Pleasure. Prejudice. Regret. Euphoria. Wonder. Anxiety. Affection. Vanity. Love. Doubt. Determination. Deviance. Forgetfulness. Confusion. Metaphor. Poetry.  Perhaps that is not quite the way to pose the question. Instead we could ask what it might mean for humans possessed, or possessed by, such attributes to attempt to think the world mathematically, to tame what makes us all too human.

Odd as it may seem, photography, or at least Peter Fraser’s photography, might offer us a way of approaching the question. However, I suspect that if asked to consider a connection between photography and mathematics, the average person in 2017 might point to the digital dimensions of the medium: electronic images comprising enormous strings of ones and zeros; or the algorithms that now shape everything from image colour balance to Internet search results and political opinions; or the sheer quantity of images now produced and consumed globally.  Fewer would point to the mathematics behind optics, geometry, metallurgy and chemistry upon which photography depended right from the start. And fewer still might look at the subject matter as presented by the photograph as an occasion for the contemplation of mathematics, but this is where Fraser’s project resides. Perhaps the title he has given his project – that one word – is enough to nudge the viewer very gently in the preferred direction.

What happens when we look at these photographs and attempt to ‘think’ them mathematically? To a large extent the effect will depend on the individual image and the individual viewer. For example, Fraser’s photograph of the Matterhorn makes me think of a number of different but related registers of time. Geological time. Seasonal time. The twelve hour clock. Digital clocks. Camera shutter speeds.  Human life spans. The near-incalculable patterns of air turbulence that blow invisibly through this frame. Even the number of photographs taken at this location since the beginnings of photography – the spot from which the Matterhorn most resembles itself. The place of this photograph within a project called ‘Mathematics’ leads me to consider it in these terms but those considerations exhaust neither my response, nor the resources of the image.

If you didn’t know that these photographs had been made as responses to, or explorations of mathematical ideas, would you be able to tell? No. But that’s the strength of the project and the nature of the pictures. Photographs do not carry meanings the way a truck carries coal. Consider Fraser’s image of scattered vegetation and the wooden hull of a boat, on a shingle beach. I happen to recognise the location. It is Dungeness, on England’s south-east coast, but  I am reminded of Lee Friedlander’s disarming description of photography:

I only wanted Uncle Vern standing by his new car (a Hudson) on a clear day. I got him and the car. I also got a bit of Aunt Mary’s laundry, and Beau Jack, the dog, peeing on a fence, and a row of potted tuberous begonias on the porch and 78 trees and a million pebbles in the driveway and more. It’s a generous medium, photography.

Indeed, there is a lot of detail in many of Fraser’s photographs. A lot to look at. A lot to get lost in. Detail, of course, was always part of the photographic illusion, part of its sleight of hand. Open the shutter and the camera will receive the light bouncing off whatever is before it. It could be a blank white wall. It could be a million pebbles. A photographer may have considered every little detail, or it could be that you, the viewer, are the first to do so.  We cannot look at the world with the same neutrality, the same indifference, the same mathematical rationality with which the camera recorded it.  To look at a photograph, any photograph, is to intuit that while the image has been made to be looked at, ultimately it does not belong to us. It belongs to the camera from which it came.