Nine things I learned from the art of Mac Adams 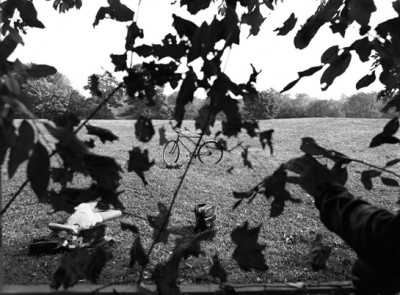 you will find allusions to detective stories and news reportage, crime scenes and

film noir, the Nouveau Roman and the photo-roman, movie publicity and film

frames, snapshots and high art, advertising and the still life, voyeurism and

exhibitionism, glamour and horror, sculpture and painting, literature and

architecture. When he began to make these works the reigning dogma in

photographic art was still very much about purity, about finding the ground and

the qualities that belonged to the medium alone. That was becoming something of

a dead end. Why shouldn’t photography accept and enjoy the overlaps with the

other arts? Moreover, might this hybrid approach actually cast new light on what

really is particular about the medium?

The gallery is an operating table and a stage set, to which the different

potentials of photography are brought. These two metaphors – operating table and

set – map very well onto what seem to be the two key impulses of the medium: the

with the culture of the moving image in which the still image finds itself. Or both.

Mac Adams does both.

Watch carefully. Economy of means and economy of expression have been vital

to Mac Adams throughout his career, be it in photography, or sculpture or

installation. But his deftness and precision only serve to highlight the ambiguity of

communication and the essential openness of all images. Looking at Adams’s

diptyches is like watching a close-up magician. Everything seems clear and lucid,

everything seems graspable but suddenly something has slipped your attention.

The magician does it once more. You watch intently. It’s gone. The key has

vanished between one certainty and another.

Everything starts in the middle. Agatha Christie would often start writing her

motive. From these she would work backwards, reverse engineering her plots so

that they would always go where they were predestined to go. Mac Adams has

spoken of a certain debt to, or influence from Christie. However his photographs

are not ‘whodunnits’. They’re not even ‘whydunnits’, or ‘howdunnits’. All those

forms are essentially linear, and explanatory. Adams’s scenarios are suspended.

They are middles with no beginnings or endings. They are more like the tableau

the middle, and we must make of it what we can. There is no explanation, no final

settling of accounts. No pointing the finger.

Photography has many time zones. I sense Mac Adams has much in common

with Nicolas Roeg, the director who once described cinema as a time machine.

The syntax of Adams’ diptychs is reminiscent of Roeg’s editing. A mix of formal

and critics tend to see photography as a raw and elemental unit, awaiting cinematic

articulation as one of twenty-four per second. Yet, away from cinema we can see

that photography has always had its own complex engagement with time, with

duration, and with movement. Think of the ‘decisive moment’, the pregnant

moment, the constructed tableau, flash photography and the long exposure, to

name of few of its different temporalities. To these we must add all the procedures

of assembly that have been so crucial to the development of photography: the

electronic technologies). The time of photography deserves a philosophy every bit

as sophisticated as that extended to cinema.

‘Narrative’ is a noun and an adjective. An image can simply be narrative

without belonging to ‘a’ narrative. Actually photography is pretty lousy at

most succinct and minimal means. An ambiguous gesture. A stray object. An

allusive composition. An enigmatic detail. An action pointing beyond the frame.

Whatever else it is, Mac Adams’s photography is a rich inventory of such things.

Diptyches are difficult but Mac Adams makes it look easy. The diptych is one

of the most challenging of modes for art and particularly for photography.

Challenging both for makers and audiences. This is because it undoes the formal

unity of the single image but shuns the comfort of the extended sequence. In a

diptych there is no flow, but a shuttling to and fro. A seductive and confounding

short-circuit. Two images. One gap. Look before you leap. Mac Adams calls this

The best things often fall into the void. Art history has its voids, and for a while

it looked as if Mac Adams’ early photography was to be lost, somehow misplaced

Postmodern Art of the decade’s end. But that period in between was so rich for

photography, perhaps the richest there has ever been. And this was precisely

because it was so messy, so uninterested in categories and boundaries. Everything

was up for grabs, nothing was off-limits, and artists went at the high speed of

creativity, not the sluggish speed of the market. Adams’s work exemplifies the

Eileen Cowin, John Divola and Ger van Elk. Critics in the mid-1970s even

referred to a discernible ‘narrative turn’ in photography. In 1977 it was notable

enough to have a presence of its own at the now legendary Documenta 6 in Kassel,

Germany. This was before Cindy Sherman and Richard Prince, before Robert

Longo and Jeff Wall. Maybe it was less glamorous, less concerned with spectacle

and consumerism and it came to be overlooked for a while. But it’s no surprise

today’s audiences and critics are looking again, not to correct the past but to

recognise the continued relevance of the work. Finally we might be getting the

past we deserve, the past we need right now.

All great art strikes us as contemporary. This is so even when we know full

well it could only have been made when it was made. In fact the hold that the

qualities. Think of the paintings of Johannes Vermeer or Edward Hopper, the films

of Robert Bresson or Jean-Luc Godard. We’d be foolish not to see them as

contemporary, not to see them as rightfully ours. There is no denying the period

detail of Mac Adams’s photographs – the clothes, the objects, the décor, the chairs

and tables. But the concerns – with perception, seduction, privacy, looking,

pleasure, evidence, artifice and knowledge – they are timeless, they abide. They

belong to every era and we are free to claim them as our own.