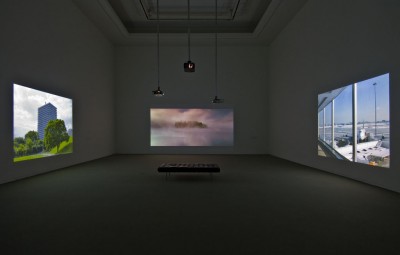 An essay on the films of artist Mark Lewis.

Mark Lewis’ single take film North Circular (2000) begins as a fixed shot of an empty car park. In the distance is a derelict Modernist office block. After two unnerving minutes of almost photographic stillness the camera lunges forward and leaves the ground, elevated on a crane, gliding towards a grid of broken windows. Three boys are playing inside the building. One boy approaches a table and sets in motion a spinning top. Coming closer, we watch the top, which loses its centrifugal grace and begins to wobble. The instant it skitters to a halt the shot ends with a cut to black, four minutes after it began. Looped for gallery presentation, what seemed at first coldly hermetic begins to open up. Lewis’ film becomes a metaphor for its own mechanism and for the mechanism of history: everything must come to an end – including modernity and its movies – if only to start anew. It is a rare reflection on the nature of modern life and film’s long-standing depiction of its fortunes.

North Circular is also emblematic of the 37 films Lewis has made since the mid-1990s. Many are silent single takes that run the length of a reel of commercially available celluloid film, transferred to DVD for display. They are slow, meditative and rich in allusion. North Circular alludes to, among other things, Jean-Baptiste-Siméon Chardin’s Portrait of the Son of M. Godefroy, Jeweller, Watching a Top Spin (1738). The absorbed boy watches a humble top, while the mastery and mystery of the depiction have the potential to absorb the beholder and set the mind spinning. Lewis has spoken of Chardin’s anticipation of art’s great shift from the ‘representation of drama to the drama of representation’.1 The modern art work may depict the most inconsquential moments of everyday life, but the manner in which it does so can be profound.

Lewis’ dramas of filmic representation could be described as ‘motion pictures’. This is an antiquated term (we encounter it perhaps once a year, when the Oscars are handed out by the Academy of Motion Picture Arts and Sciences). To think of a film as a motion picture connects it to that premiere of premieres in 1895, when the Lumière brothers screened the first film (Workers Leaving a Factory). The very first frame appeared on the screen as a still picture, set in motion by the deliberately delayed cranking of the projector. Suddenly the static photograph sprang to life. Can we still imagine the uncanny pleasure of seeing pictures in motion for the first time?

If that pleasure lives on anywhere, it is in contemporary art, which seems compelled to spiral back to the beginnings of cinema. Indeed the theorist and curator Raymond Bellour has spoken of a ‘Lumière drive’ in much recent film and video art, with its preference for the long take, simple apparatus and almost forensic attention to duration and movement. These were the joys of the Lumières’ films, most of which were records of minor movements: trains arriving or departing; menial tasks being performed; people walking or setting off on journeys. Nothing much more than this happens in Lewis’ films, but that is enough. Windfarm (2001) is a majestically composed landscape in which dozens of wind turbines rotate at their individual speeds. One is stationary, while another casts its flickering shadow across the mid-ground. The invisible wind that animates the scene also flutters the desert plants in the foreground. Each element in the frame marks time differently, while we observe them all through the elapse of a filmic time made palpable by the tension between motion and stillness. It is typical of Lewis’ ability to fuse the pictorial tradition with the art of movement.

For certain guardians of the pictorial tradition, Jeff Wall among them, the moving image is an intrusion. Movement was what the pictorial arts of painting, sculpture and photography were obliged to find the courage and craft to depict. Film simply mimics movement. This is not to denigrate the moving image (there are few artists to whom it means more than it does to Wall), but it places it outside of art, in the cinema. Lewis is equally committed to the pictorial tradition, but for him it is not so much movement that is the intrusion as sound. Lewis has a deep respect for the silence of the pictorial: most of his films are mute. This, combined with a preference for the long take, allows them to appear as pictures in motion. Several can be shown in a single gallery space, since the silence allows them to remain apart. Unenveloped by sound, the viewer is not recruited into a cinematic spectacle but permitted to remain detached and observant, as though in a gallery of photographs, paintings or sculptures. In this sense Lewis does not use the gallery wall as a screen: he accepts it as a wall.

Over the last two decades the network of filmmakers’ co-ops and independent venues that supported experimental film since the early 1960s has all but collapsed. Film has been granted a new home in the gallery and museum system. Many are ambivalent about this, because gallery spaces are unsuited to the proper presentation of much experimental film: the sound is not ideal, 16 and 35mm projectors are expensive to maintain and invigilate, there is no seating, light leaks, sound leaks and there is no scheduling (unless, of course, the gallery is temporarily turned into a cinema). At the same time moving image work has blossomed from within contemporary art. Thus the exhibition space finds itself home to films made for the cinema and for the gallery.

For Lewis the gallery is not a cinema. Although his work is indebted to cinema’s experimental tradition, notably the Structuralist films of the 1960s and ’70s, he has accepted the established conventions of the gallery. Its indifference to beginnings and endings is essential to his work, as are its unseated viewers, its roots in the pictorial and its convention of silence. Apart from leaving the lights off and mounting projectors on the walls, his art makes no special demands either on the space or the audience. Indeed most of his films last no longer than one might spend contemplating a painting.

Lewis has taken a while to arrive at this position, and he doesn’t stick to it dogmatically. His first major works were the Two Impossible Films (1995), structured as wildly ambitious trailers for imaginary biopics of Sigmund Freud and Karl Marx. Comprising graphic title sequences and sharply cut vignettes of keys scenes, they follow Hollywood conventions but at an alienated remove (Hollywood just wouldn’t take on such subject matter today). The Pitch (1998) is a shot of Lewis himself, filmed in a busy railway station. He is delivering to camera a spoken homage to movie extras, cinema’s unsung proletariat. Around him the milling commuters become unwitting extras in his film, far more realistic than any hired hands would be. Lewis ends with a rallying cry to the audience to help him make a big-budget CinemaScope movie, with no plot or stars, which is all about the extras. In a wonderfully neat tautology, the film we have just watched is virtually that. His most recent work, Documentary Film (2008), comprises four nine-minute shots of a tour guide leading us around the labyrinthine corridors of a vast private collection of movie ephemera. The guide’s soft, measured voice soothes the ear while our eyes gawp at a teeming archive verging on chaos. The camera sets out with the stealth of a Stanley Kubrick Steadicam shot, but it soon begins to drift. As the guide walks ahead, the camera lingers over drawers marked ‘Gulag Guns’, boxes of fanzine clippings, spare parts for projectors and bits of Art Deco signage. These films belong to an approach Lewis has referred to as ‘part cinema’. Cinema has been the art with which all the other arts have had to make their peace. For him this has involved breaking cinema down into its grammar, syntax and genre conventions, any of which can be isolated and mobilized to a generate a stripped-down, elemental work.

For all their variety, most of Lewis’ works deploy the long take. Looking back, we can see the long take as one of art cinema’s key responses to the cut and thrust of mainstream films and of spectacle in general. It offers an alternative to distractions allowing the audience instead to dwell with and within the image, trusting it to remain before them. Moreover, the long take is inseparable from the place where it is shot. Its lingering stare explores locality like no other image. All those who have made the long take their own, from Kubrick, Michelangelo Antonioni and Wim Wenders to Chantal Akerman, Michael Snow, Jia Zhangke and Tsai Ming-Liang, have a deep understanding of place. Lewis does too. Many of his works have been made in the places where he has lived, and most were inspired by locations he has known or stumbled across. The results are films that seem to be, among other things, celebrations of particular spaces.

That said, Lewis is from Vancouver and now lives in south London, near the Elephant and Castle. For all their particularity his locations seem to be quite generic too. There are parts of Vancouver and south London that could be just about any modern city. Watching his films, we confront that strange double articulation of place that is becoming so typical of modern life: we are here now, but we could be nowhere or anywhere. More to the point, a similar fate is befalling cinema as it fragments and disperses itself across the face of visual culture. Cinema may be particular to cinemas, but we watch it anywhere these days, from television and laptops to aeroplanes and art galleries. It is a rare artist who can show us the deep connections between the fate of place, the fate of time and the fate of their representations.

Many thanks to Jennifer Higgie, editor of Frieze, who commissioned this essay.