Metropolis Futures. Collage and the City. 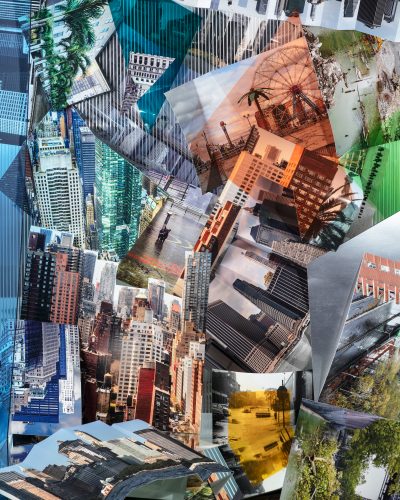 Of all the forms of visual art of the last one hundred years, it is collage that has proved the most enduring and renewing. Dada, Surrealism, Cubism, Constructivism, Pop, Situationism, Postmodern appropriation, Internet Art. It is hard to imagine any of the major aesthetic moments and movements without the energies of collage. There are a number of reasons for this. To begin with, the very proliferation of images calls for a response. If, as is often said, images ‘bombard’ and ‘flood’ us, it is as much a matter of psychical as artistic survival that we take an active position. We must have our way with images or they will have their way with us.  Secondly, modern life has come to be defined by the fragmentation of experience into intensities that often barely seem to connect, let alone cohere. Collage allows fragments to be brought together in ways that suggest affinities and resonances, while highlighting the disjunctures. Perhaps even more than drawing, collage can allow even an untrained maker to get to something profound without the barrier of technique (although collage can also be extremely accomplished technically).  Plus, of course, collage is by its nature promiscuous and adaptable. There is no shortage of material and no defined.

Paul Citroen’s Metropolis 1923, a teeming, kaleidoscopic vision of a modern city, is among the best-known collages of the twentieth century. Intricate and meticulous, it combines around two hundred image fragments from newspapers and postcards. There are no gaps, no negative spaces, and every receding perspective is cut off abruptly, turning the composition into a jagged façade of seemingly infinite architecture. The eye runs amok, although there is an underlying order.  The bottom of the composition has a semblance of street life, from which the buildings rise, hectic but dynamic. At the top is a horizon, over which loops a nifty bi-plane. Made in the first flush of modernism, it was shown in the inaugural Bauhaus exhibition, and included by László Moholy-Nagy in his landmark book of 1925, Malerei, Fotografie, Film(Painting, Photography, Film). The movie director Fritz Lang borrowed Citroen’s title and mood for his 1927 film Metropolis. Utopia and dystopia. Dreamworld and catastrophe. Such visions of the modern city survive precisely because they are so ambivalent. What did the modern city really want? What were its fantasies? Was it naïve? Guilty? Did it secretly wish for domination, or its own destruction?

A cut and pasted collage is to some extent unique. It takes mechanically reproduced imagery and subjects it to the hand and the blade. In the process, anonymous material becomes an authored work. To make a collage is always part catharsis, and part allegory; a way of dealing with the world on one’s own terms, be it celebration, criticism or estrangement.  But ‘world’ has a double meaning here, since it refers both to what the imagery depicts and to the ever-growing world of imagery itself. Citroen’s Metropolis was a response to the modern city and to the proliferating visual culture through which it saw and projected itself.

Citroen made photographs of his collages, allowing them to overcome their uniqueness and re-enter the circuits of reproduction and distribution. Many of his photographs of Metropolis are now in major institutions as artworks in their own right, including the Museum of Modern Art, New York.  In reproduction, Metropolis has also appeared in newspapers and as postcards, returning it to the very contexts from which it derived.

Jumping into the present, we find the artist Anastasia Samoylova making city collages in circumspect homage to Citroen. Squint, and their form is uncannily similar but focus on the details and the differences are clear. These contemporary cities are experiencing flood and fire. A century of unchecked ‘progress’ is leading to disaster. The optimistic modern spirit is receding fast, and the technicolor gloss feels like a thin veneer, barely capable of supressing the problems.

Samoylova’s collages are just as carefully constructed as Citroen’s, but they are not made by cutting and pasting. These are three-dimensional assemblies, precarious and made permanent only by the camera that records them. Indeed, the arrangements do not last beyond their documentation. Where Citroen’s Metropolis feels relatively solid, monumental even, Samoylova’s visions look as if one breath of wind through her studio door would blow them away. With no clear up or down, they barely seem to have a correct orientation, and what foundation they have is no more than mirrors, reflecting and refracting.

Samoylova turned to photography while studying architecture and environmental design in Moscow. Documenting her many three-dimensional maquettes she noticed the way the camera flattens space while inventing its own illusions. A photograph is always a document and a transformation, a record and an artwork. A short stint as a designer of shop window displays heightened her attention to what is possible with a theatrically constructed world seen from a restricted vantagepoint, glassed off and seductive.

Paul Citroen belonged to the world of the inter-war newsstand, and the physical browsing of printed matter. Samoylova came of age in the early days of the internet, a world of glowing, immaterial screen imagery that circulates very differently. She got interested in Flickr, the image sharing website. The general excitement about the internet assumed a world of choice and creative possibility, but what she noticed was quite the opposite: an overwhelming desire to conform. Pictorial conventions and mass ideals dominated the internet from the start, especially in the genre of landscape. Photographers seemed to compete with each other to produce the most perfect clichés. Not just sunsets and rolling landscapes, but glaciers, valleys, deserts, crashing waves, and jungles. The deeper Samoylova looked, the more specific the image types became. Mountains photographed in dramatic black and white. Trees seen through fog.  Provencal lavender fields in afternoon sun. Many photographers were uploading their images copyright-free, simply hoping for wide dissemination and popularity. Samoylova would search by keyword, downloading the images into folders on her desktop. She looked closely, studying the drive towards homogenised standards of beauty. None of these pictures ever expected to printed out, so that is what she did with them. To explore further she began to improvise still life constructions with them, checking how they looked through the viewfinder of her camera, moving her lights to sculpt the forms into a final image.

Begun in 2013, Samoylova calls this ongoing series Landscape Sublime. The sublime was that category of experience beloved of classical aestheticians and philosophers: the sense of awe and momentary loss of self that are induced by the overwhelming majesty of nature.  The internet debases much of that. The experience of landscapes is so often preceded and clouded by the experience of images.  What is sublime today is the unimaginable volume of repetitive photographs filling up the world’s hard drives.

Samoylova’s work has always had an ecological dimension but it has become more explicit of late. She has made works about the recent sightings of dolphins in the canals of Venice, and seahorses in the Hudson River – symptoms of nature bouncing back temporarily during the pandemic. Her tableaux of flooding in New York and fires in California appear at first to be less optimistic. Climate change has led to the reclassification of New York as officially sub-tropical, and its foundations are prone ever more to inundation. The skies over San Francisco have that burnt orange dread. Flames lick the hilltops surrounding Los Angeles. The source imagery is documentary in nature and it points to the facts. And yet, collage always has something speculative about it, something possible, something otherwise. Collage is an experiment in thought, not a report. It can open up the mental distance required to think, and in doing so, it suggests things could be different.

Details reproduced at 1:1 scale on the magazine page: