Materialities of the Photobook

Compendium - Journal of Comparative Studies No.2, 2022 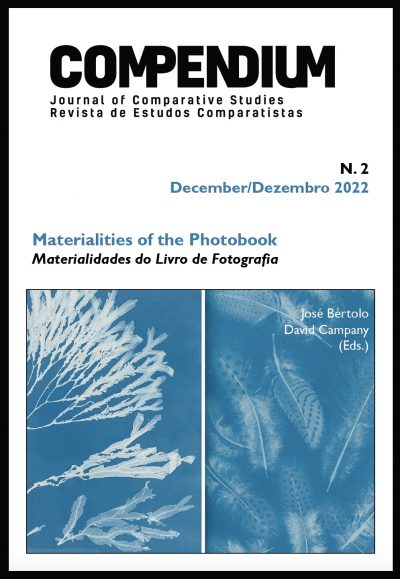 Materialities of the Photobook | Materialidades do Livro de Fotografia

In the last few decades, we have witnessed a “photobook phenomenon” characterised a significant rise in the publication, acquisition, circulation, discussion and scholarship around photobooks. Canons and counter-canons have been established, and the photobook has become a recognised form with a set of lineages. New independent and specialized publishers have emerged across the world, along with new audiences of not only collectors and photographers but also occasional and non-professional readers/viewers. Where once the histories of photography were constructed within the frameworks set by conventional art history and museums, the approach was then expanded to become a set of social and cultural histories, before being expanded again to take in material histories. Photography, perhaps more than any other medium has had a plural and unstable relation to materiality: the historical and contemporary condition of the photographic image is marked by its potential to take different and changing material forms, and hence contexts, with no sovereign relation to any of them. Making sense of photography thus means attending to its materiality and its contexts.

While an exhibition demands the consideration of elements such as spatiality, volume, scale, scenography and lighting, among others, the book asks for a different, although sometimes related set of approaches. The specificities of the photobook imply a more or less particular object with its own formal parameters, in which images, text, sequence, design and choice of materials all play a part in the constitution of the work.

Photobooks have slowly started to become objects of study and research for academics and critics. These initial studies are mostly centered on the art and book market (e.g., the work of publishers or the social profile of photobook consumers); the history of photobooks (e.g., its origins, its pivotal moments, and how we arrived at the contemporary boom); or the photobook as a specific case in the wider context of photography studies (e.g., in the 19th issue of Aperture’s The PhotoBook Review, which aimed at assessing the state of photobook studies in our time, one of the leading questions was “What is the current state of photobook criticism?”). Much is yet to be learned and thought through about the photobook as an object of study, appreciation, and interdisciplinary reading.

For this issue of Compendium, we invited authors to look closely at photobooks as complex, unstable and hybridized works, considering their material specificities, the diversity of interpretive and sensorial experiences they offer, and the varied ways in which they engage with the world and find their place within it. We welcomed essays that explored the photobook, contemporary or historical, that looked into the processes that guide its composition, its specific materiality and objecthood, its reception and the reading/viewing experience.

In the opening article, “Photo-Textual Relationships in Early Photobook Making: [Re]Tracing the Roots of Photobook Syntax”, José Neves offers a historical account of some early photographically illustrated books. Investigating various works from the nineteenth-century, such as Henry Fox Talbot’s The Pencil of Nature, or the more travel-oriented Égypte, Nubie, Palestine et Syrie : dessins photographiques recueillis pendant les années 1849, 1850 et 1851, by Maxime du Camp, and The Arctic Regions: Illustrated with Photographs Taken on an Art Expedition to Greenland, by William Bradford, Neves examines the importance of paratextual and paravisual elements — such as maps and descriptions — in the construction of these books. Neves also addresses productive tensions between text and image, looking into how text “perform[s] a paravisual role, enhancing and anchoring the reader’s interpretation of the photographic images”.

Turning to the first half of the twentieth century, particularly to the Soviet Union in the 1930s, Josie Johnson analyses the book Ot Moskvy kupecheskoi k Moskve sotsialisticheskoi [From Merchant Moscow to Socialist Moscow] in her article “Moscow Out of Time: Varvara Stepanova and the Soviet Photobook in 1932”. Considering the photo album as a possible predecessor of the photobook, Johnson raises questions of authorship (“the author is, literally, the Party”), while analysing how the sociopolitical text, the photographs of Alexander Rodchenko and the book design of Varvara Stepanova communicate. Johnson’s study draws directly from the avant-garde theorizations of book design by the Russian artist and designer El Lissitzky, foregrounding what can be seen as a conceptualising of the photobook avant la lettre.

In “Returning to Another Black Darkness: Materiality and Mattering in Photobook Encounters over Time”, Briony Anne Carlin takes a phenomenological approach to the study of the photobook. Elaborating on Sakiko Nomura’s Another Black Darkness, a book notable for its elusive and dark materiality, Carlin argues that “[w]hat appears to be a book-type thing becomes a photobook through interaction with a reader, as they gain insight into its image content. In this way, photo-books align with a performance that requires the co-operation of a reading body to be activated and fully realised”. Departing from Carlin’s own recollections written in 2018, when she encountered Nomura’s book for the first time, the article explores the performative and the relational in meaning-making within photobooks.

In “A Turn to Reception: Readers and Reading in the Contemporary Photobook Ecology”, Matt Johnston argues in favour of the previously sidelined matter of reading and what it can contribute to a prevailing, production-oriented discourse. Notions such as the absent reader, the supposed inadequacy of verbal language for the discussion of photography, and the necessity of creating new spaces for readers and habits of reading, are all paramount to Johnston’s meditation on the contemporary photobook ecology.

Clara Masnatta delves into the work of Japanese photographer Rinko Kawauchi in “Rinko Kawauchi: Imperfect Photographs”. Benefiting from Kawauchi’s globally recognized expertise in the construction of photobooks, Masnatta explores some of the artist’s works by analysing how the concept of “imperfection” is constituent of Kawauchi’s poetics at the level of photographs but also at the level of the book itself. Through a careful interplay between individual images and their elaborate sequencing, Masnatta argues, “Kawauchi offers not marvels of exactness but a galaxy of stills following the fluid nature of colours and producing a metamorphotography blurring every fixed contour”.

In “‘A dream, dictating its own course’: On Ralph Gibson’s Photobook Trilogy, 1970-1974”, Anton Lee returns to Ralph Gibson as one of the first photographers that advocated for self-publication, also creating his own publishing house Lustrum Press. Lee develops a comparative close analysis of Gibson’s trilogy — The Somnambulist (1970), Déjà-vu (1973), and Days at Sea (1974) — valuing the relevance of sequencing and demonstrating how the photographer problematises the meaning of his images through their associations and relations on the page. Lee’s structural readings are enriched by relating Gibson’s books to the literary worlds of Jorge Luis Borges, Marguerite Duras and Alain Robbe-Grillet.

The articles section closes with Henrique Júlio Vieira’s “Errâncias: O Acervo Biojuntado de Décio Pignatari”, in which Vieira scrutinizes Errâncias, a book by Brazilian literary author Dévio Pignatari combining text and image. Starting from the idea of a “bioassembled collection” [arquivo biojuntado], Vieira considers how this “literary book” can be seen as a specific type of “photobook” that borrows from the personal archive, combining photography, time, memory and autobiography, and finally questioning the status of photographs in the narrative that is created from a life.

The book reviews section gathers impressions on two books published in 2022. They are very different titles, published in different geographical and political places (Guimarães, a small city in Portugal, and Tokyo, Japan), aiming at different readerships, and created by two photographers in distinct stages of their careers. Humberto Brito writes about Portuguese photographer Carlos Lobo’s I Would Run this Way Forever (and over again), while José Bértolo focuses on Vortex, by the Japanese photographer Kikuji Kawada. The reviewers illuminate the fact that despite the numerous differences between these two works, they both contribute, in their own way, to the vigor and diversity of the photobook market today.

The interview section is divided into two parts. It begins with a conversation between José Bértolo, André Príncipe and João Pedro Cortes, the editors behind publishing house Pierre von Kleist, a key Portuguese publisher working with photobooks today. Príncipe and Cortes reflect upon the beginning of the twentieth century, their young years, and the creation of the publishing house. They also discuss the various transformations within the photobook sphere up to the present, while trying to ascertain the importance of PvK as a platform for the dissemination of Portuguese photographers abroad.

The second piece in this section brings together the answers to two questionnaires designed for this special issue. The first was sent to publishers all around the world specialized in photobooks, while the second was directed at photographers who explore the photobook in their own work and experience as artists. These questionnaires aim to map out the contemporary editorial and artistic conditions of “photobook culture” today.

The main objective of this issue of Compendium is to foster further discussion around the photobook. Since the field is large and growing, we conclude this introduction in the hope that there will be new approaches to topics such as: case studies on specific books; comparative and interdisciplinary approaches to the photobook; sequence, narrativity and meaning; book design as authorship, printing, formats, paper; reader-oriented perspectives; digital (im)materialities, zines, and photo-albums.

Licensed under the Creative Commons Attribution 4.0 International (CC BY 4.0).