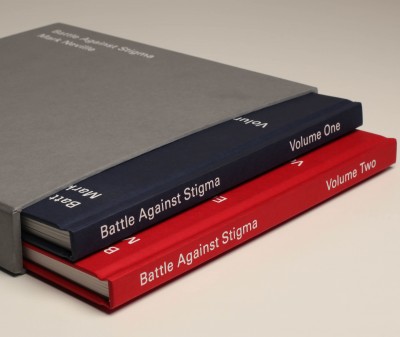 I have helped Mark Neville in the editing of The Battle Against Stigma Book Project, 2015

The Battle Against Stigma Book Project is a collaboration between the internationally renowned artist Mark Neville and Professor Jamie Hacker Hughes, one of the UK’s leading experts in the field of veteran mental health. The overall aim of the project is to challenge the stigma of mental health problems in the military and to encourage attitude change in order to facilitate seeking help at an early stage, without people being stigmatised because of mental health issues.

The Battle Against Stigma book, which is being sent out free to veteran mental health organisations and experts throughout the UK, is divided into two-volumes. The first volume is the re-telling of Neville’s own personal experience when he was sent out to Helmand in 2011 as an official war artist.The book uses imagery he made whilst he was out in Helmand. Accompanying these compelling photographs is a written account of his time living in a war zone. Neville is combining photography and words to try to give some insight into PTSD and adjustment disorder both of which he found he had fallen victim to on his return from the war zone.

“I wanted to use my personal experiences of Helmand, and the difficulties that I had in adjusting to civilian life upon my return, to make a book that would attempt to reduce the stigma many troops suffering with PTSD feel about coming forward.” (Neville)

The second volume is made-up of the written testimonies about PTSD and adjustment disorder from serving and ex-serving soldiers. The book has been written in ‘Canterbury Tales’ style – soldier, mate, family, sergeant major, padre, officer, academic, mental health worker, charity worker and commander, with the ‘Soldier’s Tale’ sections being written by four serving regular and reservist personnel and veterans.

Battle Against Stigma is supported by The Wellcome Trust