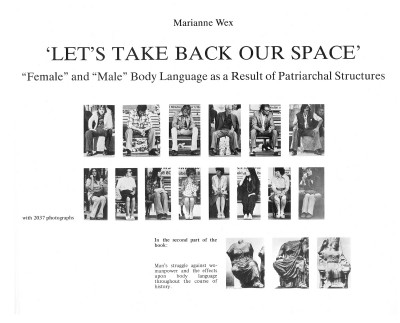 The German artist Marianne Wex started out as a painter before producing her photographic project Let’s Take Back Our Space, one of the great unsung works of 1970s feminist history and cultural analysis. Born in Hamburg in 1937, Wex studied at the city’s University of Fine Arts, where she later taught for seventeen years. In 1979, she published Let’s Take Back Our Space as a book, with the subtitle “Female” and “Male” Body Language as a Result of Patriarchal Structures. It is a visual survey comprised of hundreds of photographs assembled into dozens of thematic grids: Seated persons—leg and feet; arm and hand positions; standing persons—leg and feet; arm and hand positions; people sitting and laying on the ground; arm and leg positions; Egyptian, Greek, and Roman statuary; how the men of Christianity took over an old goddess gesture; the stultifying effect of the patriarchal socialization of men. And so on. The images were culled from a huge range of sources—advertisements, reportage, fashion magazines, studio portraits, the history of art—and many were taken on the streets of Hamburg by Wex, who proposes that our smallest, most unconscious gestures speak volumes about the power relations of gender in daily life.

It is an argument made with images, and, as such, it is highly dubious as science. We all know photographs can be chosen and sequenced to make an argument, that their evidential quality can be bent to serve almost any view. But Wex goes beyond the scientific. Her project is an intervention, and its claims to authority come less from the presentation of facts than from the flashes of recognition we may have in response to what she presents. Decades on, it’s impossible not to see aspects of ourselves and of present society in these images.

Moreover, there is space in the project for plenty of experiments and anomalies. Women do sometimes stand with their feet turned outward, but only if they are working class and not in the company of men, Wex notes. When shown stereotypical photos of men asserting themselves, women can easily and comfortably imitate them. But when men are shown images of women in “feminine” poses, they either can’t or won’t imitate them, even for the sake of an experiment. The few images of children and young adolescents are very telling: we can sense how the gender- and sexuality-neutral body language of early youth is soon conventionalized into familiar patterns. Not always, but most of the time. Wex is careful not to make the argument seem totalizing, or the situation hopeless, and she seems to retain a revolutionary zeal for change. Yes, her approach uses heterosexuality as a kind of default, and there is little space for questions of ethnicity, subculture, or the ironic adoption of the body language of the powerful.

Such complexities would make updating the project almost impossible, if Wex were still a working artist today. Let’s Take Back Our Space was first exhibited as photo panels at NGBK (Neue Gesellschaft für Bildende Kunst) in West Berlin in 1977, but a serious illness turned Wex away from art and toward the study of alternative medicine. This remarkable project wasn’t shown again until Mike Sperlinger curated a show in 2009 for Focal Point Gallery in Essex, England. Let’s Take Back Our Space is both a remarkable record of its time and a still-troubling reflection of ours.

Thanks to Michael Famighetti who commissioned this piece for Aperture no. 213, 2013