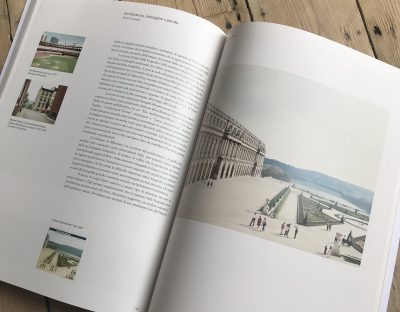 Electa has published the catalogue of the exhibition Luigi Ghirri. The Landscape of Architecture, curated by Michele Nastasi, presented in the spaces of the Triennale di Milano (May 25 – August 26, 2018).
Born out of collaboration between the Museo di Fotografia Contemporanea and the Triennale, the exhibition brings out the importance of Luigi Ghirri‘s work in architecture, through his ten-year collaboration – between 1983 and 1992 – with the review “Lotus International”.
Ghirri brought to architecture a freer way of conceiving reality, based no longer on the reduction and exclusion of the infinite subjects of the world, but on their inclusion in a timely image, a reading of the landscape in which architecture, in its different forms and different times, is relocated in the present.
With texts by David Campany, Elio Grazioli, Angelo Maggi, Michele Nastasi, Pierluigi Nicolin.

Although deceptively simple and unforced, Luigi Ghirri’s photographic observations of architecture were the result of his wide learning and his appreciation not just of built form but of the long and rich history of its representation.

The basic craft of photography could not be simpler, particularly for the kind of notational images Ghirri made with his good but rudimentary camera.  Beyond the choices of vantage point, framing and exposure there was not much more to his photographic procedure. What gives Ghirri’s images their distinctive and sophisticated character is his disposition and his ability to use a camera to join his interest in what was in front of him with an intellectual and aesthetic understanding of how his seeing was informed by what he had experienced and learned already. In almost every photograph by Ghirri there are echoes and resonances of other images, other times, other places.

A history has yet to be written of the ways that important photographic artists have found sympathetic support and opportunities in the progressive magazines dedicated to architecture.  Many of these publications, including the The Architectural Review and AA Files (UK), Architectural Forum (USA) and Lotus International (Italy) have seen themselves not just as showcases for the best practices, but as discursive spaces that understand architecture in relation to all the other arts, past and present. The imagery and ideas they have published have not been merely documentary or promotional, but at times highly reflective and experimental.

The development, spread and reception of architectural modernism and what became known as the International Style, was inseparable from the photographic image. These were buildings that lent themselves to black and white photography as reproduced on the pages of magazines and books.  In modernism, architecture and image entered a new and complicit relationship, one that has troubled many commentators, photographers and architects. When architecture presents itself as mere image it is diminished. Likewise if photography is forced merely to serve architecture, it too is diminished.

Luigi Ghirri’s work was resistant to this kind of diminishment but not in any strategic way. He simply saw that photography’s relation to architecture could be richer, multi-layered, subjective and as a result truer to experience. Take for example his much-loved photograph of the Palace of Versailles, shot in 1985, which appears on the cover of Lotus International no. 52.  There is a beguiling formal perfection here, but it is not quite the perfection of the architect’s ideal view of the building and its gardens. Instead Ghirri finds his own formality, one that recognizes the architectural desire but also makes us see what has happened to Versailles. The place is a living archaism, a tourist destination, and a site of time travel. The clarity of the light makes everything visible but it also makes it uncanny. Ghirri permits us to see the place almost as a model of itself, plucked out of time for our contemplation.

In that same issue of Lotus International, Ghirri published his little essay ‘Objective Vision’. He wrote of his desire for a ‘holistic photography’, one that was open to all influences, from painting and cinema to music, literature and poetry.  He noted too how photography could play with time, sliding the present into the past, while summoning the past within the present.  Indeed, for Ghirri photography could only be honest if it accepted all these complicated influences, which of course had to include photography itself. He could not, and would not, separate his love of making photographs from his love of looking at the photographs of others that he admired. He reserved particular affection for American image-makers: Paul Strand, Robert Frank, Lee Friedlander and what he called the ‘ethical rigour’ of Walker Evans.  Today of course it is Ghirri’s parallel with the American colour photographers of his own generation that resonates.  Look at his photograph of Versailles next to Joel Meyerowitz’s 1977 view of the baseball stadium in St Louis, or Stephen Shore’s ‘Church and 2nd Streets, Easton, Pennsylvania, June 20, 1974’. All three seem to share the same affection for the appearance of space and light, and the same intuition that within the camera’s objectivity is a capacity to estrange the world and make it thinkable.

Ghirri is quite rightly celebrated today as a highly original photographer-writer. While his words were imagistic, his pictures were a weave of inter-textual references and quotations.   His characteristic mix of philosophical reflection, poetic leaps, and cultural commentary is as present in his writings as in his images. Moreover, it is clear that Lotus Internationalallowed him to experiment and develop.  The sensibility that he pursued on the pages of the magazine soon blossomed into Paesaggio Italiano / Italian Landscape, the book published in 1989. Its combination of short essays and images – always linked, yet always distinct – is perhaps the richest summation of Ghirri’s approach.

It is illuminating to look at precedents for the kind of visual-verbal presentations Ghirri was making in Lotus International. For example in the 1930s the British artist Paul Nash contributed a number of highly idiosyncratic pieces to various magazines. ‘Swanage, or Seaside Surrealism’ (Architectural Review, April 1936) was a gentle mockery of the ugliness of an English coastal resort that had been saved from irrelevance by items of architectural salvage brought from London and scattered incongruously around the town.   Nash took the photographs and wrote his commentary almost as a parody of architectural guidebook prose. Swanage was a montage of fragments and impressions, a living museum of objets trouvés. And what Nash was conveying to the reader was not a neutral report but the fertile findings of an exploratory mind.

In January 1958 Architectural Forum published ‘Color Accidents’, a photo essay by Walker Evans. It presented square compositions picked out from the weathered walls of a New York street. In the accompanying text Evans compares but distances these walls them from abstract painting, which was then at its popular height:

‘The pocks and scrawls of abandoned walls recall the style of certain contemporary paintings, with, of course, the fathomless difference that the former are accidents untouched by the hand of consciousness. Paul Klee would have jumped out of his shoes had he come across the green door below. The courage, purity and gaiety of these scarlet shots in violent green space would be applauded by all the Klee audience.’[i]

Evans’s photographs are consummate formal exercises, but the words emphasize that what is important are the walls themselves. The images are artful documents of things Evans wants his readers to notice out in the world. Ghirri worked in this way too. There are clear parallels between these images by Evans and the many that Ghirri made throughout his life of marked walls.

Beyond the insistence on personal interest and expression, what Ghirri’s work at Lotus International shares with Nash and Evans is an interest in the complex accretion of time within space.  Modern architecture so often denied the past, preferring materials like glass, steel and concrete that were intended not to age or show the passage of time. This is essentially inhuman, a disavowal of the notion that all things must pass. All buildings exist in a world that precedes them and will outlive them. In the 1970s and 1980s, Stephen Shore photographed architecture in a similar way to Ghirri.  Years later Shore summarized his thoughts in a short essay, ‘Photography and Architecture’:

‘A building expresses the physical constraints of its materials: a building made of curved I-beams and titanium can look different from one made of sandstone blocks. A building expresses the economic constraints of its construction. A building also expresses the aesthetic parameters of its builder and its culture. This latter is the product of all the diverse elements that make up ‘style’: traditions, aspirations, conditioning, imagination, posturings, perceptions. On a city street, a building is sited between others built or renovated at different times and in different styles. And these buildings are next to still others. And this whole complex scene experiences the pressure of weather and time. This taste of the personality of a society becomes accessible to a camera.’[ii]

Luigi Ghirri would have recognized this sentiment, and understood that in the right hands photography is uniquely placed to express it.

Of course, what all these photographer-writers were concerned with was the violence of modern progress.  The arrogant erasure of the past. The dangerous and deliberate forgetting that impoverishes us all by cutting us off from what determines our lives and the spaces we inhabit. But there’s not a shred of nostalgia in Ghirri. Rather, there is an acceptance that any society that does not live in the past a little, the present a lot and the future a little will turn mad and murderous. Sooner or later.  There is also in Ghirri a clear adherence to the two great unspoken tenets of the avant-garde: to point out what’s wrong with the world, and to show us beauty where we thought there was none.