Looking for Transcendence: Can Photography Represent the Ineffable? 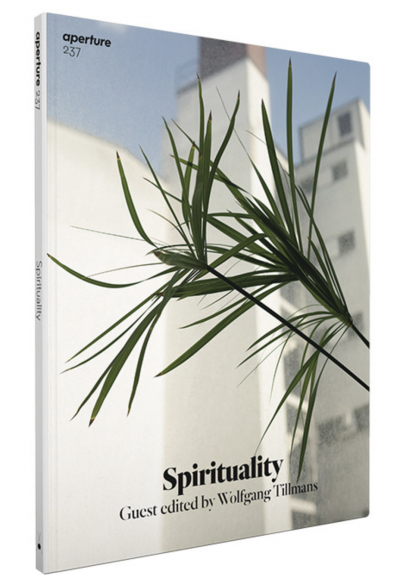 Looking for Transcendence
by David Campany

If the spiritual, even loosely defined, is a realm beyond the actual, then photography’s relation to it is bound to be complicated. Picturing the spiritual must either go through the actual, or somehow slip around it. In this sense, photography is, like us, straddling the cold facts of immediate existence and loftier ideals. This might be why the spiritual in photography regularly teeters between the sublime and the ridiculous. Strain too hard for metaphor, symbolism, or transcendent feelings, and it can easily fall flat, humiliated for taking on ideas above its station. Forty years ago, the critic Rosalind Krauss called it photography’s “problem of fraudulence.”

The most obvious fraudsters were the spirit photographers of the late nineteenth and early twentieth centuries. They played the medium’s sobriety against its easy way with delirious tricks, claiming to manifest everything from specters to the living dead. It’s hard to imagine anyone falling for those hokey ectoplasmic emanations leaking from mouths and eyes, but fall they did. The well of human credulity is deep, especially in moments of psychological crisis. Spirit photography tended to find its strongest reception among the traumatized, bereaved, and emotionally needy, which is why it was so popular in the wake of catastrophes. But we’d do well to remember that its bogus claims were propped up by the supposed objectivity of the camera. Nobody wanted a painting of a ghost.

However, Krauss had a different fraudulence in mind. It was the one lying at the heart of high modernist photography. She was writing about how, in the 1920s, Alfred Stieglitz began a large body of photographs of clouds, which he named Equivalents. He pointed his camera upward to frame and give form to portions of the sky, but aimed to transcend the literal. The label Equivalents was a way of asking the viewer to see his images as more than they were. No doubt we have all felt at least something numinous while contemplating clouds, or even photographs of clouds, so why couldn’t Stieglitz leave his photographs untitled, and leave us to respond for ourselves? Was he anxious that a photograph of clouds might be just that, and no more? Part of photography’s claim to high art was that it had access to realms beyond the immediate. Where mere photographers were confined to reality, camera artists could transcend it. Even so, actuality is always the portal to deeper thoughts and feelings because it is all we have to go on. An experience from daily life prompts a daydream, and the sheer mystery of human existence confronts us with how little we really know. The poet William Blake wrote of seeing “the world in a grain of sand.” That’s something we can all relate to, but imagine Blake at your shoulder, insisting that you see it. It’s pious and insufferably patronizing.

A thread of spiritual assertion ran through modernism, in all the arts. It’s there in the paintings of Swedish artist Hilma af Klint, which are marvels of abstraction, aside from her spiritual talk. It’s in the Celestographs August Strindberg made, in the 1890s, by leaving sensitized photographic plates on the ground overnight, facing upward toward the sky. He suggested that the mottled and colorful swirls were the heavens transposing themselves without need of a camera, through some cosmic will. They do look kind of astronomical and maybe that was his point. Strindberg was interested in the latest scientific accounts of the universe, which proposed a common origin of all the planets and stars. He also had a more mystical belief that “everything is created in analogies, the inferior with the superior.” Heavens and earth, base material and lofty aspiration.

Neither the Equivalents nor the Celestographs are purely photographic since both rely upon emphatic titles to guide our response. Nevertheless, we don’t require directives to enjoy such images in our own ways. The meaning of art resides with us viewers. If you are so inclined, you can get a lot from just looking, and it might even be something spiritual.

Caspar David Friedrich,  Wanderer above the Sea of Fog (1818)

Sky, earth, water, and abstract form. Strindberg, Stieglitz, and other modernists such as Minor White circled around the familiar iconography of spirituality, which has deep roots in the history of representation. It has given rise to profound art, but also to utter banality. It is only a few short steps from Caspar David Friedrich’s painting Wanderer above the Sea of Fog (1818) to propaganda for mindfulness nature retreats. Under today’s mass image regime all experience is threatened with commodification, especially the spiritual, which has come to mean a sort of vague post-theistic longing for oneness, a soothing balm for the alienations of modern life, or a kind of blissful existentialism without the angst.

In his book McMindfulness: How Mindfulness Became the New Capitalist Spirituality (2019), Ronald Purser goes even further. He argues that in individualizing our responsibility for our own spiritual well-being, our capitalist system, which produces so many of our psychological problems, is let off the hook. We are encouraged to develop mere coping strategies. In this scenario, there is nothing collective, let alone activist or revolutionary, about the mindful and the spiritual. It is reduced to everyone’s solitary concern in the marketplace of mind—and the status quo remains exactly the same.

We can glimpse something of this in the way the visual rhetoric of spiritual rejuvenation has taken up residence in advertising. From banks and cars, to food and fashion, you can put a logo for almost anything on a vaguely spiritual image. We have all seen photographs featuring a lone figure in swimwear, sarong, or trekking gear, pictured from behind, gazing into an algorithmically approved view of an ocean, sand dune, or crystal-clear lake. If the poser is at one with anything, it’s with their own camera-ready narcissism, which is passed off as cosmic union. I’m here and you’re not. Swipe up for booking details.

How come “spiritual” imagery is so easily debased? Because there is nothing inherently spiritual about it. If you can see the world in a grain of sand, then the spiritual is everywhere. No place, image, artist, or lifestyle guru has any privileged access to it. The images of spiritually, so many of which are promises of special experience somewhere else, are not spiritual at all. The spiritual is a condition of response, not a type of picture.

In May 2019, a photograph of a line of climbers on Mount Everest went viral. Three hundred hopeful conquerors were crammed along a ridge, waiting for their individual moment at the peak. Three died in the overcrowding. It’s a jaw- dropping and tragic image, but also a humiliation of the very idea of life goals and bucket lists. If you want an image that transcends its literal meaning, don’t be surprised to find that it is something like this, a deeply troubling photograph of spiritual quest gone very wrong.

Last week a student came into my office to tell me she needed a gap year in Thailand, to find herself. “What if your self is in Tokyo or here in London?” I asked, only half joking. “Well, it’s cheap in Thailand and everyone goes there to find themselves. You can see pictures of it all the time.” She saw the absurdity and laughed. Then I confessed to a strange experience at the Grand Canyon a few years ago. One golden morning, a friend and I gazed into its abyss but felt nothing. No transcendence, no spiritual epiphany. We became awkward and silent. Back in the car, I read from our guidebook: “It is not unusual for some visitors to be left feeling flat by the sight of the Grand Canyon.” It offered no explanation. Perhaps it’s just too vast to comprehend. Perhaps a big hole is harder to respond to than a big mountain. Perhaps we had seen too many images of it already. We drove all day to Nevada and, around midnight, we came over a hill to glimpse in the distance the white-hot lights of Las Vegas. We both gasped involuntarily, and felt guilty. The Grand Canyon had taken millennia to form, but a tacky town thrown up just a few generations ago took our breath away. We cannot decide what is going to affect us at the most profound level. It might be canyons or clouds; or it might be city lights. It might be a glass on a table, a fold in a sleeve, or a smile on a face. The spiritual is not something we can be instructed to feel, and when the feeling comes, it is unpredictable.

While the spiritual seems to be invoked by an ever-greater number of photographers—be they artists, professionals, or amateurs—the more telling contemporary works are those that reflect on why this drive is so strong, and where it might be leading us. One of my favorite Instagram feeds is @insta_repeat, which presents grids of images, mainly of solo figures in landscapes, sourced from other feeds on the site. It’s a sort of metacommentary on pictorial convention. Each grid has a deadpan descriptive caption: “Person centred & silhouetted in a cave”; “Medium shot of the back of a blondish person’s head with windy hair.” The photographs people aspire to take seem to be so startlingly formulaic that it becomes a kind of catharsis just to look at them curated and re-presented here.

Anastasia Samoylova’s Six Real Matterhorns (2019), from her ongoing series Landscape Sublime, which she began in 2013, contemplates a related phenomenon. While being a real mountain, the Matterhorn is also the definitive mountain icon, with its distinct geometric form (although only when viewed and photographed from the correct angles). Samoylova searches online for repeating image types. She selects from the thousands available, prints them out, assembles them as sculptural collages, and rephotographs them. From reality, to 2D electronic image, to 2D material print, to 3D environment, and back to 2D print. The idea of direct, unmediated spiritual engagement with nature is stretched to breaking point, and the only thing that is sublime here is the vast number of conformist images out there. There are seven Matterhorns in Samoylova’s tableau. One is a shot of the fake version at Disneyland.

Morten Barker’s series Terra Nullius (2017) looks, at first glance, like a series of blissfully empty landscapes into which one might project all the familiar feelings of spiritual hope. The titles hint that all is not as it seems. Apocalypse Now. Battleship Potemkin. Lawrence of Arabia. Each work is a montage of hundreds, sometimes thousands, of little pieces of background imagery lifted from DVD frame grabs from war movies. In these films, we don’t see these landscapes, and yet we do. Barker has constructed imaginary vistas, in a sort of half-dreamed déjà vu.

If the spiritual has been so emptied in secular society, what about religion? It should go without saying that the religious have no more access to the spiritual than anyone else. Indeed, since religion assumes it already has important answers, it actually leaves the greater mysteries to those who do not claim to know. So let me end on two profound facts made thinkable by the power of photography, but which are no less mysterious for that. The Andromeda Galaxy is on a direct collision course with Earth and nothing will stop the impact in around four billion years. The sun will burn out in around five billion years. So we know categorically that a double fate for life on this planet is written in the stars, whether we avert our immediate ecological catastrophe or not. However, the creatures that will be around to witness whichever astronomical end comes first will be as different from humans as we are from bacteria. None of this was planned with us in mind, but photography can help you contemplate it.