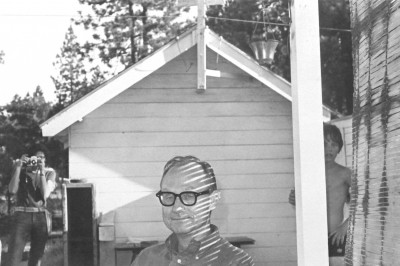 What happens when a virtuoso photographer enters a domestic situation? Ordinary events may be lifted suddenly into another realm. Here is a photograph by Lee Friedlander. It was taken in 1970 and given the title Peter Exline, Spokane, Washington. Nominally then, it’s a portrait of the man in the dark-rimmed spectacles and buttoned-down shirt. We don’t know the names of the two people in the background but we may assume all three know at least something of each other.

The picture is neither formal nor informal, on that line Friedlander has danced disarmingly for decades now. The artist R.B. Kitaj once described Friedlander and his art as a “cross between the penny-plain and the complexly interesting”. Friedlander is a consummate photographer with a deep love and acute understanding of the amateur’s happy accident. You or I could have taken this picture of friends in our backyard but we didn’t. Or if we did achieve something like it once, we’ve precious little chance of doing it again.  Friedlander has made hundreds like this.

Everything we expect of a domestic photo is present. The relaxed semi-performance of the subjects. The semi-private space. The semi-familiar setting. A photographer belonging to and separate from the scene. But the dynamics are all askew. It’s hard to tell how or if the three are family yet they are co-present and each addresses Friedlander, at least for the instant of exposure. Moreover all three seem to dramatise in different ways the act of photographic seeing. The figure on the left looks back through a camera. The boy on the right is caught behind a flash-lit pillar, a sliver of shadow bisecting his chest to pass over his right eye. And in the middle sits Mr Exline, comically low in the frame, in finely slatted sunshine. On the white shed behind him falls a triangle of light, its apex almost touching the corner of his spectacles. It’s like a diagram from a book on optics. This is so much more than a portrait. It is a meditation on domestic photography and its value, on backyard psychodrama, on picture making, on light, sight, vision, geometry and the transformative nature of photography. Exline sits there wry and enigmatic. Is he in on this brief, layered amusement or is he the butt of it?

The image appears in the book Lee Friedlander Portraits, published in 1985.  At that time portraiture and domestic photography were under attack. Cindy Sherman was reveling in the camera fictions of her invented personae. Jo Spence was unearthing the dark power structures of patriarchal home life. Countless writers were pointing out the pain and tears suppressed by the family album. On the face of it, Friedlander’s pictures belonged to another era or another camp – the work of a more detached ‘photographer’s photographer’. But it’s telling how many artists associated with the overt critique of mainstream representation had great admiration for Friedlander. In 1975 the young Martha Rosler wrote of his ‘cool, gentle disdain’ and ‘guarded strategies’ that left portraiture ‘undercut’. Victor Burgin reworked that mix of compositional verve and reflexive seeing in his allegorical photo-texts, notably US77 and Zoo 78. Friedlander has always understood that photographic seeing is at once technical, pictorial and inescapably ideological. He stretches photographic conventions and social values until they snap back on themselves.

Is there any domestic situation that is not penny-plain and complexly interesting? Each deserves a photograph as sophisticated as this but precious few receive it.

Thanks to Ben Burbridge who commissioned this piece for Photoworks magazine no. 20, a special issue on Family Politics.