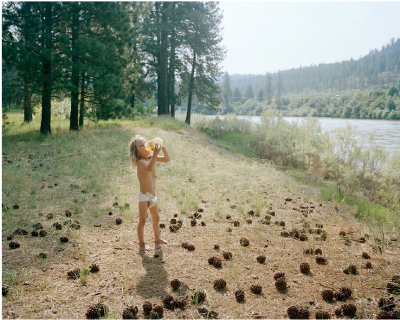 The actualities and the myths, the facts and the metaphors. Justine Kurland photographs America’s tangled sense of itself. How do we see when seeing has been so anticipated by images? Through the filter of all that has gone before, can a photographer describe lives and places anew? In the last few years Kurland’s pictures have emerged in groupings, with names like This Train Is Bound for Glory and Sincere Auto Care. Gathered here in eloquent sequence is a small sample from her forthcoming book with Aperture.

A train snakes like a toy across the desert between Nevada and Utah. The view looks unchanged for decades but those are boxcars of cheap consumables from China, bound for Walmart. The photographer’s son, Casper, a regular companion on these trips, throws back his head and refreshes himself. He looks like a feral creature, a pioneer, and a twenty-first-century boy, chugging juice from a plastic bottle. The excess trickles down his belly to his diaper. When Casper was six, Kurland took a teaching job. It reconnected her with the work of Eugène Atget, Walker Evans, and the long tradition of intelligent documentary photography. For now, this is her idiom—wide, generous, and testing.

Her road trips are long and her van is eleven years old. With 250,000 miles on the clock, it gets patched up often. Since nobody feels entirely positive about cars these days, breakdowns and crashes feel like larger symbolic deaths. But as Evans wrote in “The Auto Junkyard,” a 1962 photo-essay published in Fortune, “There is a secret imp in almost every civilized man that bids him delight in the surprises and in the mockery in the forms of destruction. At times, nothing could be gayer than the complete collapse of our fanciest contrivances. Scenes like these are rich in tragicomic suggestions of the fall of man from his high ride.”

Justine Kurland, What Casper Might Look Like if He Grew Up to Be a Junkie in Tacoma, 2013

One day she met a man who looked uncannily like Casper, all grown up and coming down from a junkie’s high. With a head full of worries about keeping her boy safe and the knowledge that he won’t be hers forever, she photographed this man. She accepted him, watching him almost pray with his hands around a Coke. Her camera is respectful but it wards off the fears.

And here is Cuervo, on horseback, no car in sight. Kurland got to know him and photographed him over three years. He can hunt, prepare food, and light fires without matches. His past includes drug running and incarceration in Mexico. He has just crossed the Sierra Nevada with his animals. Kurland recalls his words: “I’m a man with a man’s needs, and if you want to get some photography done you are going to have to satisfy my needs.” She walked away. “When I came back he was completely naked. Somehow that was the final straw. I haven’t talked to him since.”

We all know the easy failings of men. The pride, arrogance, narcissism, and fragile vanity. Yet, nobody is quite sure what a man is supposed to be. Myth and history were once on his side but no longer. In these photographs, made with young Casper at her side, Kurland offers her own brave contemplation of it all.