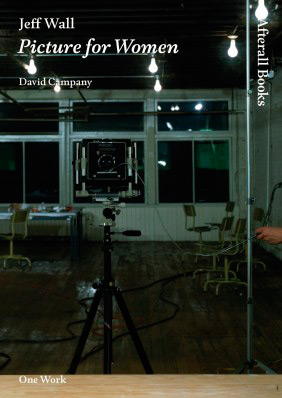 Jeff Wall’s Picture for Women (1979) marks the transition of photography as contemporary art form from the printed page to the gallery wall. In the photograph a woman looks outward, as if at the viewer; a camera occupies the centre of the image; the photographer stands on the right. Modeled on Édouard Manet’s painting Un Bar aux Folies-Bergère, Picture for Women is an ambitious attempt to relate the artistic and spectatorial demands of the late 1970s to modernist pictorial art.

In this book, David Campany offers an account of Wall’s move from a Conceptual approach to a reengagement with the idea of a singular (rather than serial) picture. Contrasting Wall’s idea of the photograph as a tableau or a ‘picture’ with the works of the Pictures Generation – including Richard Prince, Cindy Sherman and Sherrie Levine – this book argues that Picture for Women is inseparable from the modern fate of the picture in general. From here Wall’s image is placed in a broader context of photographic art, including the work of Manual Alvarez Bravo, László Moholy-Nagy, Edward Weston, Lee Friedlander, Victor Burgin and John Stezaker.

For this book David Campany received the International Center of Photography Infinity Award for Writing.

Hear Jeff Wall and David Campany in conversation at the launch of the book.