In Through the Back Door 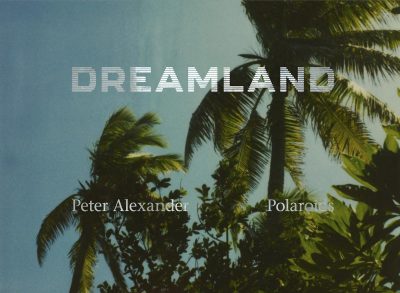 Peter Alexander (1939-2020) recorded his visual experience of the Californian zeitgeist in his Polaroids between 1972 and the early 1990s. In 2020 he arranged the previously unpublished images in pairs. Alexander was a pioneer of the Light and Space movement that emerged as an important, innovative, and distinctly West Coast approach to art. He is most renowned for his sculptural forms made from cast resin. Their luminous transparency evokes both the purity and artificiality of California’s light and colors. It may come as a surprise that an artist so well known and admired for minimal and pure sculptures has also made Polaroid photographs of what seems like a maximally impure world. The accompanying essay reveals fascinating connections between the two.

In Through the Back Door

Chickens. The Stock Exchange. A fish on a chopping board. Rocky landscapes. A wrecked car. A palm tree. A toilet. A staircase. A cactus. A shark. A shoe. A statue. A polar bear. Lights at night. It may come as a surprise that an artist so well known and admired for minimal and pure sculptures also made Polaroid photographs of what seems like a maximally impure world. Of course, there is no reason at all why an artist’s oeuvre should be consistent. But equally there may be no reason to suppose there is any real inconsistency here. What if the minimally pure and the maximally impure were really part of the same artistic outlook? What if Polaroid pictures of fuzzy TV screens and everyday life belonged in the same family of objects as geometric forms made from colored translucent urethane?

We will come to Peter Alexander’s objects and images soon enough, but let us come at this question of presumed opposites and hidden affinities from somewhere else, and at another point in time. In the late 1940s and 1950s, the world of modern painting was dominated by Abstract Expressionism. At the moment, the world of photography was dominated by photojournalism. Large canvases lacking any figuration or immediate reference to the outside world, and small reproducible images of world events. They seemed to have nothing to do with each other, but in truth there were deep connections. In Abstract Expressionism the canvas came to be understood as a surface for marks and traces, a surface to receive paint as an event—dripped, daubed, smudged. This was not unlike the light-sensitive film in the photojournalist’s camera, also primed to receive events as marks and traces, sometimes blurred, sometimes shaky, often grainy. The abstract canvas and the photographer’s emulsion trapped the impressions of actions. Looked at this way, the painter’s gestures in the studio and the gestures of citizens in a tumultuous world were not so far apart.

Although bound to particular moments in art history and world history, each were expressions of a kind of medium-specific modernism. That is to say, at that historical conjuncture they were thought to be the very essence of what painting and photography were. But times change, and our understanding of mediums changes too.

By the 1960s and 1970s, the idea of mediums being completely distinct from each other was being tested profoundly, partly by the hybrid ways artists were working, and partly by the growing acceptance that there would always be affinities between mediums, even if they appeared distinct, and even if the affinities could not be comprehended immediately. For example, the very rich relationship between Minimalist sculpture of the kind made by Sol LeWitt and the cool, straightforwardly descriptive photographs of industrial park architecture made by Lewis Baltz in the early 1970s now seems obvious. Back then there were all kinds of barriers—aesthetic, discursive, institutional—that seemed to preclude the connections. But they were there. Maybe it just takes time to understand and accept what is first intuited. Maybe it takes time to see what’s staring you in the face. Sometimes it can take decades.

So, what might be the obscured affinities between Peter Alexander’s Polaroids with their hectic and fragmentary glimpses, and the elegantly calm perfection of his sculptures? There are, of course, no correct answers, so what follows here is a set of thoughts and propositions.

Genre and the generic. Just as modern sculpture had to come to terms with the industrial nature of generic modern materials, so modern photography had to come to terms with the cultural weight and conventions of the dominant pictorial genres. Genre and the generic are modern life’s presets; its default modes, its efficient standards, its unthinking presumptions. Peter Alexander’s sculptures and photographs can be thought of in relation to genre and the generic. The sculptures clarify and estrange the industrial nature of their materials. The Polaroids clarify and estrange the familiar forms and genres of the image world. Neither has an obvious purpose or use.

Elusive surfaces. Modern sculpture (and modern painting) turned away from the figurative to concentrate on the nature of their own materials, particularly the surface effects of those materials. The sheen and gloss of Peter Alexander’s sculptures attract the eye but cannot hold it. Vision slides over the surface of his objects and slips inwards through their translucence. The surface of a photograph, particularly a Polaroid photograph with its glossy plastic coating, is similarly evasive. The eye flits across it from detail to detail, like a flat pebble skimmed across the surface of a small pond, before dropping into the depths of its illusion.

Object as image / image as object. For all its insistence of presence, immanence, and objecthood, Minimalist sculpture is also theatrical, imagistic, and deeply photogenic. The late industrial age in which it came into being was also the age of the industrially produced photographic image, of which the Polaroid was both a culmination and an aberration—a photograph that insisted upon its own singularity and objecthood.

With its emphasis on hands-off industrial manufacture, Minimalism deepened and extended the logic of the Readymade formulated by the prescient Marcel Duchamp. The industrially produced object, selected from the many and nominated as a word of art. Specific and generic. However, Duchamp’s ambition for his Readymades was that they confront the viewer, shocking them with the force of a “snapshot,” as he put it. Pure image, unmediated by artiness. (The most famous Readymade, the urinal titled Fountain, 1917, was lost almost immediately, but its reputation grew for decades via photographic reproduction. Its physical absence and visual presence affirmed its uniqueness as an object and idea.) An unexposed Polaroid is just like the other nine in its pack of ten. And the pack of ten is just like the millions of other packs of ten. It is only when it is exposed—to the specifics of the world—that it becomes unique. Its uniqueness is guaranteed by its industrial standard. The Polaroid has no negative from which to make copies. It can be reproduced, of course, for example on the pages of a book, but the convention for reproducing a Polaroid is to include its distinctive plastic white border. In this way the Polaroid enters the circuits of reproduction while insisting on its status as singular object.

Automated light. Trigger the camera’s shutter and the light flows in, suddenly and without hierarchy. From empty to full in an instant. And if that light is focused, a discernible image will result. The camera is blind to this. It cannot think or see and it has no idea what it is doing. The camera gives form to the image, in unwitting collaboration with the photographer. Peter Alexander’s sculptures are similar. Their conception and execution are perfect and perfectly whole. They appear spontaneous, hiding their labor. They cover the traces of their own making in order to appear immaculate. They require light, not only to make them visible but to activate them. Light must flow through them, unbidden. They do not exist in the dark.

Flood. It may be that the restraint of Minimalist sculpture finds its escape in the photographic act. The necessary holding back, the reserve and the compression, are released with the pressing of the shutter and the acceptance of a worldly flood.

With his camera Peter Alexander did not forget the kinds of form and materials that constitute his sculptural works. His Polaroids do not mimic them, or express a photographic equivalent to them. Nevertheless, it is notable how often the subject of these images seems to be imaging itself. It is there in the recurrence of TV screens and the spectacle they transmit. It is there in the recurring of the motif of light sources. Brightly illuminated buildings and cities at night. Illuminated signs. Skies. Light as means and motif.

Suspensions of judgment. An artist need have no point of view, no opinion. An artist may speak through masks, or mask their view. It is enough for the artist to be interested, fascinated, concerned; and concern may not itself constitute a point of view. This has always been the case in art, but it takes on particular inflections in both Minimalist sculpture and photography. Each has its own compelling ways of withholding the intentions and motivations that brought it into being. In other words, for all their differences, Minimalist sculpture and photography share a similar relation to the inscrutable. We cannot know, and do not need to know, what the artist thinks of what they have made and presented. Whether it is affirmation, indifference, or critique is not a question to be projected onto the imaginary persona of the artist, as if he were an enigmatic messenger to be deciphered, nor onto the artwork. If the artwork communicates, it is through the invitation it extends to us, to respond for ourselves.

Almost as soon as it was invented, photography was quickly put to use in the various “communications” industries. News. Advertising. Lifestyle. Anthropology. Archiving. It was used to turn visibility and the photogenic into values, into currency. But at heart, photography is an untrustworthy currency and an unreliable messenger, either about the world or the photographer. Its frozen fragments are always more like poetry than prose; more like suggestions than meanings or arguments; more like questions than answers; more like silence than speech. With no distinct origins or destinations, photographs defy narrative, even when placed in artful sequence. Without beginnings or endings, they are emanations of states of affairs that may never have been truly really known, even unto themselves. Fragments put in continuous orbit by rockets long lost.

A clutch of Polaroids. Objects and images. Held like a deck of cards. Shuffled. Placed on a table. Read like runes. Rearranged. Presented. Printed. Offered.