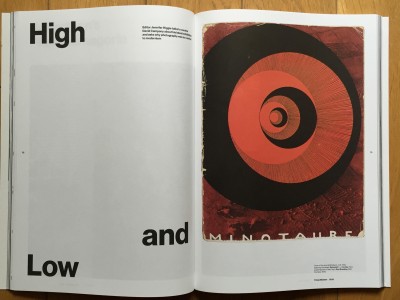 ‘High and Low. Jennifer Higgie talks to curator David Campany about his latest exhibition and asks why photography was so central to modernism.’ Frieze Masters magazine no.4, 2015

Jennifer Higgie: The exhibition you have curated, ‘A Handful of Dust’ opens at Le Bal ndepenn Paris this month. The title, of course, is a quote from T.S. Eliot’s The Waste Land (1922) but other references come into play. Could you describe the show’s evolution?

David Campany: ‘I will show you fear in a handful of dust.’ Eliot published his poem in London in October 1922. The same month, a photograph by Man Ray, of dust gathering on the surface of Marcel Duchamp’s Large Glass was published in Paris. A deliberately misleading caption called it ‘a view from an aeroplane’, in reference to the estranged landscape imagery of wartime aerial reconnaissance. Just a few weeks earlier, Ernest Hemingway had flown over the French capital, looked down, and wrote that he now understood Cubism. What to make of such a coincidence? I take it as the beginning of a version of modernism that looked to substances like dust and the abstracted view as keys to the last century. So my exhibition begins in 1922 and winds its way through diverse things: police forensics, the American dustbowl, the use of abject materials in conceptual art, images from the surface of Mars. It ends with Nick Waplington photographing an Israeli rubbish dump in Palestine. Along the way there are well-known artworks by Wols, Laure Albin Guillot, Xavier Ribas, John Divola, Sophie Ristelhueber, Eva Stenram, and many others, but also postcards, books, magazines and films.

JH: You trained as a photographer. What inspired you to curate your first show?

DH: Photography can subvert the hierarchies of culture, because it has spread everywhere, as art or as design, in galleries, on printed pages, posters, or record covers. This ubiquity is what made photography look so modern in the 1920s. To follow photography is to range across culture, disregarding the orthodoxy that puts museums at the top, books lower, magazines even lower and websites grubbing along the bottom. One finds innovative and important photographic work in every context.

My first show was ‘Anonymes’, also curated for Le Bal, Paris in 2010. Le Bal is a space dedicated to the document in a very expansive sense. The exhibition looked at the depiction of anonymous citizens and the inspiration came from two very different objects. Jeff Wall’s Men Waiting (2006) is a four-metre wide tableau photograph of labourers on a street corner hoping for work. Walker Evans’s Labor Anonymous is a humble page spread in Fortune magazine from 1946, showing workers walking down a street. The similarities struck me profoundly. The more time you spend with photography’s rich past the more you notice correspondences across time and across context.

JH: How does being a photographer yourself influence the way you think about the photographs other artists have taken?

DC: A big part of photography is problem solving: formal problems, problems of representation and of editing. The photographer Stephen Shore has noted that it’s an inherently analytical medium, pointing at things to think about, but transforming those things too. It’s also, as the late Lewis Baltz put it, a subtractive medium: you start with the chaos of the world, select a part of it, put a frame around it and try to make a sense of it, a new sense, a non-sense. If you understand these things, you’re on your way to understanding why photographs look and communicate the way they do. The other answer would be that we are all photographers, and have been for a long while now. This makes the contemplation of photographic art different from, say, the contemplation of painting. Only a small portion of the audience for painting actually paints. This makes painting strange and other-worldly, which is vital to its charm. Photographs never feel that strange, however distant they may be from the iPhone snap. That’s a blessing and a curse, as many photographers will tell you.

JH: You have authored a fascinating cross-section of books that explore photography from myriad angles but you seem particularly drawn to iconic images of the US: Gasoline (2013), Walker Evans: the magazine work (2014) and The Open Road: Photography & the American Road Trip (2014). What is it that draws you to this subject, in particular?

DC: America was (is) a restart, a remake, a second attempt, a work in progress. As a result, I think the nation has a very sovereign relation to self-image. The act of picturing is a means of diagnosis and assertion. America is also a new nation and this means photography has been around for a large part of its history. To anyone interested in the medium, this is attractive. Moreover, nearly all the really great American photography is critical of the country’s mainstream culture and politics. Sometimes explicitly, sometime implicitly, but it is always there. It’s as if the criticality and the great artistry, the disappointment and the hope, inform each other. The photographers of independent mind have been monitoring the great experiment. I think that’s a particularly North American phenomenon.

JH: Tate Modern appointed its first Curator of Photography in 2009. Why do you think photography has struggled for so long to be considered an art form?

DC: Because it’s so complicated. The ‘struggle’ is what happens in our heads every time we look at photographs. The artistic sensibility in photography cannot be separated from other sensibilities – the functional, the instrumental, the automated. Why does the art world like explicitly constructed photography so much? Because it makes it easier to see where the art is. Why does it like portraits and landscape photos that look to painting? Same answer. Why does the art world have such trouble with street photography and documentary work? Because the art part is so mixed in with the notational, the spontaneous and chance. It’s perplexing.

It seems to me the museum and gallery function like operating tables to which all the socially dispersed practices of photography are brought, either to be re-presented (think of shows of documentary or fashion imagery that was first intended for the printed page) or remade (think of Christopher Williams’s relation to industrial photography, Elad Lassry’s play on the commercial still life, or Rut Blees Luxemburg’s nocturnal views of familiar places). But always with photography the relation to art is a charged issue. I would hate to see the end of this struggle, as you put it, but it will never happen. Sure, in recent decades photography has become an integral aspect of contemporary art but it has only happened with the closing of the gap between art and the rest of culture. Photography’s promiscuity has been its passport to art world prominence. Of course, true modernists like Germaine Krull, Man Ray and Moholy-Nagy intuited this long ago, working with great agility across so many spaces of culture.

JH: What are you working on at the moment?

DC: A couple of books. One is about exhibitions of photography from the 1830s to the present. The other is to do with the significance of the printed page for contemporary art. All art magazines are photographic, including this one. Every image on these pages is photographic, whether it is of a painting, a sculpture, an installation, or a photograph. When we look and read about art we accept this but never completely. We know the experience is vicarious.

David Campany is a writer, curator and artist who lives and works in London, UK. He has been awarded the ICP Infinity Award, the Kraszna-Krausz Book Award for his writing. ‘A Handful of Dust’, opens at Le Bal, Paris, France, on 16 October. The accompany book is published by MACK.