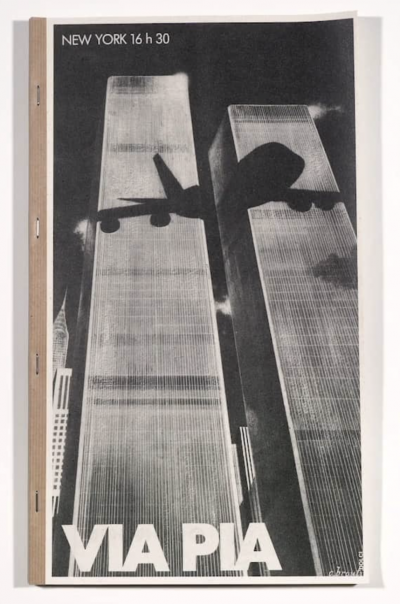 Twenty years after the World Trade Center attacks, I looked into how the twin towers had been previously used in advertising as an emblem of New York City, and I came across an advertisement from 1979 for Pakistan International Airlines in Le Point magazine. It was striking to see how the shadow of a Boeing 747 projected on the towers had a totally different impact before 9/11. This publication starts with a photocopy of the PIA ad in Le Point and continues with a photocopy of the previous photocopy, until reaching the total destruction of the image halfway through the book. From there on, we assist at a gradual and inverted revival of the advertising, in a subtle reenactment of the iconic towers.

A 1979 advertisement for Pakistan International Airlines features the outline of a Boeing 747 projected on the gleaming glass and steel of the twin towers of New York’s World Trade Center. The angle and scale are impossible, which adds to the dreamlike combination of elements and, in 2021, to the uncanny feeling of…what? Premonition?  Foreshadowing?

In Pakistan in 1979, the country’s deposed Prime Minister Zulfiqar Ali Bhutto is executed; the theoretical physicist Mohammad Abdus Salam wins a Nobel Prize; and the United States Embassy in Islamabad is set on fire, killing four, after false reports emanating from Iranian radio claim that U.S. forces have occupied the Grand Mosque in Mecca. In the United States, Nikola Kajava, seeking the release of Reverend Stojilko Kajevic, hijacks a plane flying from Chicago to New York. In the UK, Margaret Thatcher comes to power, cementing the ascendency of what will soon be called neoliberal capitalist culture.  Jean-François Lyotard’s The Postmodern Condition: A Report on Knowledge is published: knowledge forms were being, and would continue to be, transformed rapidly and profoundly by communications technologies.

If the ‘icon’ is the defining visual form in the era of mass media, it is not because it embodies universal or collective values.  It is because it is a placeholder for competing projections and truth claims – psychological, political, cultural. An icon, or iconic image, is a recognisable signifier with no agreed signification. It provides a surface illusion of communality and continuity in a time of deep contradiction and discontinuity.

The twin towers evoked a number meanings when they existed between 1973 and 2001. The swagger of not one, but two state-of-the-art constructions. Soaring confidence bordering on arrogance. Utopian freedom and dystopian control. World trade, as the United States saw it.  Of course, the towers became even more well-known with the event of their destruction, living on in print and on screens, symbolising a whole new set of contested meanings.

Almost by definition, a terror strike must come as a surprise, so it risks not being recorded by cameras. A double strike solves this. The first attracts attention, and the second exploits it.  Was this the reason the twin towers were chosen? Was their destruction an occasion for producing images of destruction? Did these images, immediate and yet immediately spectral, lead to the non-sensical declaration of a long, cruel, capricious and unwinnable war against an abstract noun: terror?

And what of such images now? What purpose do they serve? It makes little sense to argue over their ‘real’ meaning. The icon is an image form that so often disavows the contradictions it cannot articulate, appearing solid in differing ways to the incommensurable parties who desire its power. But as such, it only represents in extremis the essential ambiguity of all images. (It is there in that 1979 advertisement for Pakistan International Airlines.) To accept this is not to excuse cruelty, nor to obscure inequality with relativism. Cruelty and inequality are not relative. But images are.