Facts and Other Mysteries, around Aaron Schuman’s SLANT 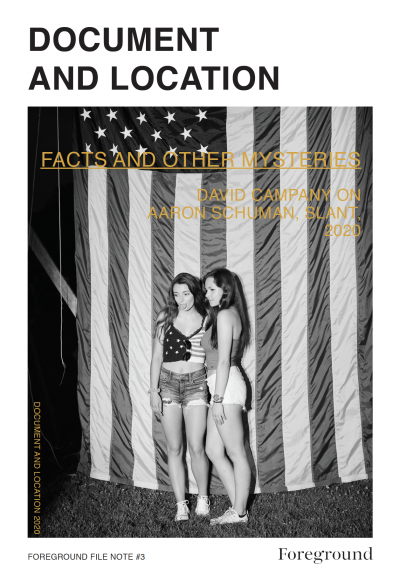 Facts and Other Mysteries is the third essay released in Foreground’s File Notes series, an occasional series of commissioned writing that will critically engage with different areas of Foreground’s programme.

The essay continues the File Note series current focus on our Document and Location programme. Developed as both a research group and public programme in collaboration with academics from multiple disciplines at the University of the West of England, Document and Location investigates how our understanding of place is directly formed through how locations are recorded, and subsequently narrated by different disciplines.

The new essay explores SLANT, a project by Document and Location member Aaron Schuman that interweaves clippings of police reports published between 2014-2018 in the local paper in Amherst, Massachusetts, with quietly wry photographs made by Schuman within a thirty-mile radius of the town, in response to their unintentionally deadpan descriptions. What began as a genuinely affectionate, tongue-in-cheek take on the small towns where Schuman spent his childhood steadily came to reflect the disquieting rise of “fake news”, “alternative facts”, “post-truth” politics and paranoia in America following the 2016 election.

“There is only slant. Regimes of realism are just that. Regimes. Shared or enforced conventions that eventually crumble. When they do crumble, there can be immense feelings of relief, but also of trepidation and anxiety: will the world be plunged into relativism? Into ‘post- truth’? Into ‘fake news’? (The death of God had, and is having, a similar effect). But ‘slant’, as I imagine Dickinson and Schuman to understand the term, is not the same as ‘spin’. Slant is a matter of accepting that truth must be pursued while knowing that its form cannot be presumed. It has to be fought for, and fought over, speculated, experimented, hypothesized, wrestled with, and offered sincerely, while knowing that it is always going to be partial and provisional.”

Facts and Other Mysteries can be read and downloaded for free via the Publications page on the Foreground website or the Writing page on the Document and Location website. Find out more about Aaron Schuman here.