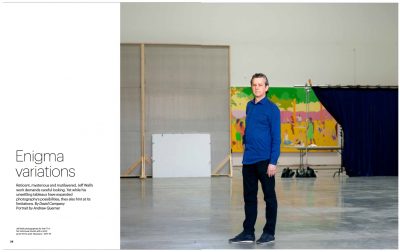 An essay on the recent work of Jeff Wall, commissioned by the FT Weekend Magazine.

We live in a culture of quick glances, particularly at photographs. If we are not skimming magazine pages, or gliding past billboards, we are swiping and scrolling online. At times, it is hard to imagine an alternative but it is an old complaint. There were voices in the 1920s warning against image proliferation and diminishing attention spans. We have been blaming photography for a while now. But if there is one photographer who has championed slow looking and an art of fewer but better images, it is Jeff Wall. From his native Vancouver, for over forty years he has made pictures that are calculated to decelerate us. Why shouldn’t photography be as rewarding, multi-layered, and puzzling as any of the arts?

Nothing unites Wall’s subject matter. He has made images of soldiers rising from the dead, marine creatures swimming in an open grave, and picnicking vampires. However, these dark fantasies are far outnumbered by his array pictures of what at first seem like nothing much at all. People cleaning, waiting, walking, napping, or talking. Most often his photographs are intended to be seen in a gallery setting as singular pictures, each encountered on its own terms. In itself this is unusual. Photographers tend to make bodies of related images – series and projects – as if deep down they feel that one is not enough, that one could not hold our attention, or cover a subject. Wall gambles on making his photographs compelling enough that their secrets, or at least some of them, will reveal themselves as you look and think. Where most photographers wanting attention will resort to shock or spectacle, Wall goes the other way, making images that are withdrawn and mysterious.

Occasionally he does stray beyond the one to make a diptych, or triptych. Consider Summer Afternoons, a pair of photographs of a high-ceilinged domestic interior. The walls are sunflower yellow and the carpet is pea-green, with cushions and chairs in matching pinks. It is an overripe palette Matisse would have relished, but since these are realistic images, it places them somewhere in the past, perhaps the early 1970s. Either these are old photographs, or contemporary photographs of a dated interior, or we are looking at some kind of reconstruction.

We see a naked man lying on the carpet, his back to the camera. He looks vulnerable and awkward. A naked woman lays on a day bed, as if posing for a David Hockney portrait. She seems bored and detached, less a real person than a placeholder for the idea of an aloof reclining female nude. A male fantasy, perhaps. What is the relation between these two images, and between these two people? It is not as simple as it first appears. In a Jeff Wall picture there is nearly always something unsettling in the situation shown, and the ways it is shown.

Were you to encounter Summer Afternoons in a gallery, the figures would look actual size, as if you were standing where the implied observer was. Working at this ‘life scale’ has been common in painting for centuries but photographers rarely use it effectively. It can lend the viewer’s gaze a psychological charge, heightening the feelings of empathy, fascination and illusion. We can stand back to appreciate the composition, or be lost in imaginary connection with the people and objects. Up close, Summer Afternoons is peppered with little details, like clues to an unspoken story. The books on the sagging shelves are mainly art and cinema theory. There is a typewriter. The man might be a student, a young lecturer, or a critic. On the walls there is austere conceptual art: drawings of geometrical boxes, and squares of gloss varnish on the matte paint. We might ponder the tension between reductive art making and the excesses of fleshly depiction. Between mind and body, intellect and desire.

Look again at the space. Where is the camera placed to get that shot of him? It must be outside the window. Is this mere practicality, or does it mean something? Is he being watched? The room is photographed from different angles. In a movie, if one of these shots followed the other we would presume continuity, as if jumping between points of view in real time. Still photographs placed side-by-side do not quite do that. We look at the images simultaneously, and even ‘reading’ them from left to right cannot guarantee how they relate. It can only ever be suggestion.

Notice how she is not present on the daybed in the picture of him, and his foot cannot be seen at the edge of the daybed in the picture of her. This is not the same moment. Are these people in this room on separate summer afternoons? Do they even know each other? Maybe they are consecutive tenants in a furnished flat. But something seems to bind the two of them. Do their lives touch somehow? They are part of the same artwork, and we are pattern-seeking mammals that want the world to cohere, but perhaps it just doesn’t.

Over the years, Wall has taken his inspiration from many sources. It can be literature, cinema, other pictures, memories, or observations of daily life. He has made a few images the way a traditional documentary photographer does, noticing something and shooting it straightforwardly. Generally though, he begins without a camera, mulling over a mental impression that might make for a rewarding picture. He then prepares and collaborates, the way filmmakers do. He hires performers, finds locations or constructs worlds. He even shouts ‘action’ even though a still image is the goal.  But far from everything is planned. Wall must wait for something unexpected, something he cannot predict – the spark of contingency without which photographs look so dead. It might be a spontaneous gesture gifted by a performer, or a slight shift in the fall of light. If Wall could get the pictures he wants to make just by observing the world, he would. Most of the time, however, what he wants isn’t really out there to be snapped quickly. It requires methods that are less than direct.

Wall has spent his life thinking how photographic pictures work, what we want from them, and what they seem to want from us. He is erudite on the matter but also reluctant to talk. Last year I walked with Wall around his retrospective exhibition in Mannheim, Germany. On a hunch, I ask if there is something autobiographical in Summer Afternoons. He recoils with a slight smile. “That shouldn’t matter. Your knowing my motivations might prevent you from enjoying the pictures for yourself.” He is right. All too often, artworks are written about and spoken of as moments in the artist’s life. Really they are moments in ours, for that is where meaning is made. We shouldn’t have to experience art vicariously, and we are most free when we don’t. “But…yes, it did start with a moment from my own life,” he accepts. What we are looking at is a replica of the flat in Olympia, West London (Russell Road, to be precise), where Wall lived with his wife in 1972.

Born in 1946, Wall painted in his youth. He then got caught up in the brainy and rather uptight conceptual art scene of the 1960s. Although it revolutionized art, conceptualism was hostile to the pictorial, seeing it as outdated and somehow a capitulation to the bourgeois status quo. That notion hasn’t aged very well, and deep down, Wall had always loved the pictorial arts. At their best, the sensual pleasures they offered are also intellectual pleasures, and can be radical in their own ways. Unsure how to move forward, Wall stopped making art and came to London’s Courtauld Institute to study it instead. Masterworks such as Manet’sA Bar at the Folies-Bergèrehung in the Courtauld Galleries, and Wall looked at them closely. London was also a hotbed for new theories of art and representation that were informed by feminism, Marxism, psychoanalysis and cinema studies.

Summer Afternoons can be seen as an unlikely reimagining of Wall’s experience of that time. When I ask about its diptych form, he tells me it began with the image on the left, of the man on the floor, so real in his gaucheness. Wall felt there was no way to integrate the woman into same composition. The second picture emerged out of the failure of the first, as a way of presenting her almost as an apparition. It is a world of light, and colour and possibility, but something is unattainable, both to the characters depicted and the viewer looking at them. Once it was clear it was going to be a diptych, it was also clear it could really go somewhere with that form. Wall could explore the strange potential of two images conceived as one work.

Returning to Vancouver in 1973, Wall thought for a while about making films, but it was the stillness and silence of pictures that drew him. By around 1977, he found his way back to making them, in the form of the large-scale tableaux for which he is now known internationally. Back then, serious photography was small, not much larger than page size and in black and white. Colour was emerging as an artistic direction but wasn’t widely accepted, and anything set up or prepared was regarded as artistically dubious. In the decades since, all these things have become acceptable in contemporary art photography. This is in no small part down to Wall’s precedent and influence. Somehow though, his work remains in a category of its own. What sets it apart is not easy to define but I think it has something to do with reticence and with a deep understanding of the enigmas of photography.

The reticence keeps Wall away from the temptations of spectacle, flashiness and conspicuous budget. Yes, his images are large (although some are very small) and yes, some cost a lot of money to make (although some cost next to nothing, and some that look simple were actually the most costly). More than any of the arts, photography has taught us there is no correspondence at all between size of production and artistic merit. You can walk into the street with your camera phone and come back with something remarkable. Wall himself has made a few pictures that way. Others can be made only with long and complicated methods. Neither is intrinsically superior, but budget is always a distraction, so it is best not to flaunt it. It is simply the means to an end.

As for enigma, it comes from what Wall’s pictures cannot disclose, which is as vital as what they can. If Summer Afternoons compels it is in the tension between what is recognized straight away, what is revealed slowly, and what remains unknowable. Not because it has been hidden by Wall, but because photography has its distinctive ways of being partial and incomplete. It always promises to show and tell, but it is often at its most pensive and beguiling when we sense it cannot. The more you look, the more you experience and understand, but the less you can conclude.

Perhaps this is why the thousands of photographic images presented to us in daily life expect to be given only a glance. If we dwelt too long on any one of them, it would become mysterious and incapable of performing its dim-witted task. These days we have less faith in photography’s promise to reveal the world, and yet we live in a culture that expects it to get its message across quickly. But what if photographs don’t have messages? What if they cannot carry meanings the way a truck carries coal? That might be a failing in documentary or advertising photography, but not in art. When photographs hold our attention over time, it’s not for their simplicity. It is for their mystery.