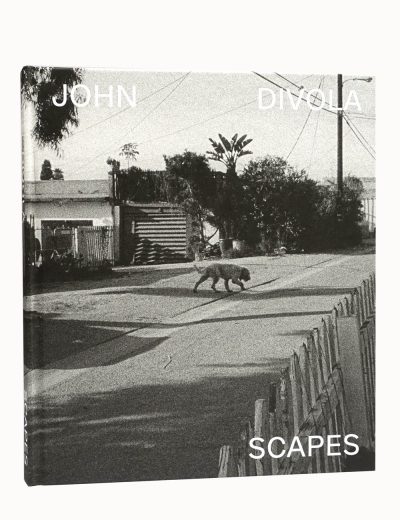 ‘Easier said than done’. An essay written for the book John Divola – Scapes, published by Skinnerboox

For all of his artistic life, John Divola has concerned himself with photography itself, as a medium. Its qualities, conditions, properties, possibilities. One of those qualities, its illusionistic power to describe of the world before it, means that photography is never only photography. The medium requires the presence of something external to it, off which light bounces, to be gathered by a lens before leaving its mark. If the external world is essential to photography, then perhaps it is really part of the medium. This is where the definitional trouble, or fun, begins. And this is where I find John Divola. Figuratively, and sometimes literally he is there, convening encounters between his camera and the world.

Cameras and their users are caught between the universal and the particular. Photography and photographs; humanity and whatever specific kind of human we happen to be. There is at least something existentially universal about Divola’s photographic adventures. The lone observer moving through the world and reflecting upon it through various camera possibilities. But nobody is truly universal, or only universal. We each come wrapped in our particulars, just as each and every photograph belongs to the universe of photography precisely insofar as it is particular. Forever the two. When I look at Divola’s photographs, I sense something universal because I sense all the particulars. Yes, a white, male, middle class Southern Californian, post-conceptual artist of the kind that makes these kinds of photographs. But nobody makes photographs quite like Divola. He is one of a kind, and therein are the universal and the particular.

There is a passage in Jean-Paul Sartre’s Being and Nothingness in which the writer describes a person walking alone in a forest, feeling at one with it, and momentarily losing their sense of self. The person comes to the edge of a clearing. Looking across the clearing, the person glimpses another person in the distance. The stranger is far enough away that no details about them are discernible, beyond being human. But the presence of this stranger changes everything. Neither person can be at one with the space, which is now shared, charged, social. There is an ethical demand, and a focussed sense of self that results from being perceived by another.

Sartre was a very imagistic writer. He described scenarios for us to imagine. Although the forest encounter seems simple, when I think carefully about how I am actually picturing it, in my mind’s eye, it becomes more complex. I imagine it from the point of view of the person at one with the forest. I imagine it from the point of view of the stranger. I imagine the scenario from above or to the side, as if I were an invisible witness, observing without being really present or seen. I imagine other eyes in the forest, perhaps human, perhaps not. Sometimes the scenario feels dangerous. Sometimes it feels liberating. And I imagine how others might imagine this scenario. Sartre keeps its simple, in order to allow for multiple responses. Universal and particular. I know John Divola has read Being and Nothingness, and that it means something to him, because he once made an artwork about it (The Green of This Notebook 1995).

On some level I think the photographs gathered here are about aloneness, and maybe even loneliness, with all the euphoria and anxiety, all the exhilaration and boredom, all the joy and dread, all the universals and particulars that this can entail. But Divola did not simply observe distant ships, lone figures, isolated houses and dogs. He did not simply run in the desert. He photographed these things. Photography externalises and makes things thinkable, and communicable. When I look at these photographs, I enjoy them as pictures and documents. I enjoy them as records of actions, performances, places, light, time, and traces of being in the world. I imagine being Divola, while knowing I am not. I imagine other people imagining they are Divola, while knowing they are not. I imagine what Divola looks like from the point of view of a stranger, a dog, a passing ship, and a distant house.  I imagine what kind of image I would make in these scenarios, and what kind of images others might make. Universals and particulars.

There is something clarifying about deserts and seascapes.  They are like sketches of places, stripped of clutter and distraction, but they are no less particular for that. The less there seems to be in a place, or in a photograph, the more acutely we sense what is there. So, yes, they do feel like worlds set apart, slightly out of time and away from things. They also feel perfectly contingent. Being in a desert or seascape heightens one’s attention to the here and now, and this might make for something cosmic. Such places, and photographs of such places, can exaggerate the universal and the particular, and allow them to be contemplated.

It is tempting to think of the universal as a higher goal, a lofty aspiration, something edifying and transcendent. That is usually how it is thought about. But photographs complicate this, because if they allude to anything transcendent, it comes from their inevitable particularities. You may have noticed that when photographers try too hard to be transcendent it quickly becomes vapid or pompous. Divola embraces and inhabits the grounded condition of photography, the here and now of its earthly situation. If anything transcendent does emerge, it is from, and conditioned by, the plain facts of life and the attempt to make them interesting with a camera. This is the source of the profound humility and endearingly absurd humour I feel in much of Divola’s work.

“Try again. Fail again. Fail better.” I know, I know. Samuel Beckett’s mantra from Worstward Ho is quoted too often these days, so let me give you the lines that follow it:

Nothing is perfect. Nobody is perfect. Failing better is a noble goal for any photographer. And easier said than done.