Drink the wine, discard the bottle, then drink something else. 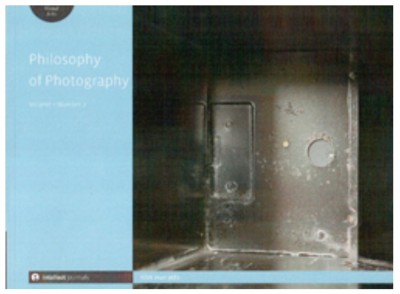 Drink the wine, discard the bottle, then drink something else.

A short text commissioned for the first issue of the journal Philosophy of Photography, 2010

A couple of years ago I was at a seminar that was intended to bring together ‘theorists of photography’ and ‘philosophers’, to see what would happen. With such a crude distinction being made in the first place I think the organisers secretly knew the outcome. By ‘secretly’ I don’t mean they kept it from the participants so much as they kept from admitting it to themselves. The theorists of photography assessed what the philosophers might be interested in and vice versa, and each side tailored its presentations to the other. These weren’t really ‘sides taken’ so much as hats temporarily assumed for the day (I don’t know anyone who is not on some level a theorist of photography or a philosopher of it). To nobody’s surprise the common ground was the perennial hot potato that is the definition, or essence or ontology of photography. Or maybe it’s a cold potato, depending on whether you think the topic is worth pursuing beyond the fairly well established positions that either the matter is decided and closed, or is open permanently because the object is a moving target.

And here we have a journal titled Philosophy of Photography.  Photography is being conceived as the object of philosophical reflection or inquiry. Not that the term or discipline ‘philosophy’ is any less contested than ‘photography’.  Nevertheless to quote the card the editors of the journal sent me in September of 2009, its remit is to “provide a forum for debate of issues arising from the cultural, political, historical and scientific matrix of ideas, practices and techniques that constitute contemporary photography.” Although this is necessarily vague (as any project must be to accrue funding and institutional support these days) it is helpful in a roundabout way. It gives a sense of how the editors do plan to conceive of both philosophy and photography: culture, politics, history, science; ideas, practices, techniques. Photography has now had at least three decades of very serious attention from some of the most advanced minds of our time who have understood and approached it as something that is profoundly shaped by and able to shape our understanding of culture, politics, history, science, ideas, practices and techniques. So is this business as usual, or is there a, or many, philosophies of photography?

It is certainly true that a number of people who would consider themselves to belong to the discipline of philosophy have in recent years become interested in photography. And on this basis what they do with this interest is more likely than not to be called a ‘philosophy of photography’. However, whether what they are actually doing is something other than participating in the “debate of issues arising from the cultural, political, historical and scientific matrix of ideas, practices and techniques that constitute photography” is another matter. In a recent and fascinating article Diarmuid Costello and Dawn M. Phillips (from the Department of Philosophy at the University of Warwick) tell us the philosophy of photography is a “relatively untrammelled field” but what they then ‘trammel’ it with is a series of astute reflections of photography’s relation to automatism, causality and realism, picking up where the existing debates that have not bothered with the title ‘philosophy’ have left off.[i] If photography’s relation to automatism, causality and realism interests you, you’ll be interested in this essay. If you were wondering what on earth a philosophy of photography could be you might also be interested, and you’d learn that it’s not so different from the wider and ongoing discussions. That might be a disappointment or a nice surprise.

Any new journal will want to make the case that its time has come. So why might a philosophy of photography seem particularly pressing? Two asymmetrical yet connected answers suggest themselves. The first follows a line of thought we can see in the diagnoses of Rosalind Krauss and Michael Fried, to name only the most obvious.[ii] Over the last three decades or so photography has been displaced from the centre of visual culture and dissolved in its specificity through the demise of the illustrated press, the rise of television and the electronic convergence of media. This period corresponds with photography’s new availability to, and triumph in art. In its eclipse photography becomes a theoretical object that comes to ‘matter as art as never before’ to paraphrase the title of the book by Fried (which, as many critics soon pointed out is persuasive but not in its mobilization of the philosophies of Wittgenstein and Heidegger). The core argument is that photography became so central to art only once it became thinkable, and it only became thinkable once it didn’t occupy the centre of visual experience, once it was no longer the defining medium of the day, once its burden as primary chronicle and document was lifted.  Krauss calls this ‘obsolescence’ but that seems hasty because clearly there’s still plenty of photography around. The model ‘T’ Ford is obsolete; photography isn’t. Let’s stick with ‘eclipse’. Photography, its practitioners, its theorists and its philosophers are making sense, are perhaps only able to make sense of photography in this eclipse.  One doesn’t have to go for either of the very different and narrow canons of photographic art defended by Fried and Krauss to entertain this general assessment.

However, this journal’s remit mentions neither art nor aesthetics specifically and this points us to a second sense in which a philosophy of photography might seem attractive.  That eclipse affects not just art; it affects all existing photographic practices and our relations to them. While it’s true that art has become the privileged space for the discussion of photography, its terms are inevitably narrow and often debilitating.  A few years ago I suggested that:

“…art has become the space to look askew at the general field of the photographic, to engage directly or indirectly with a commentary upon the image world at large. The space of art has thus come to function either as a dissecting table to which the different forms of the social photographic are brought for creative reflection, or as a set upon which they can be can be reworked. These two metaphors – dissecting table and set – map quite well onto what seem to be the two key impulses behind much current photographic art: the forensic interest in detail and the cinematic interest in mise-en-scene or staging. These impulses are so forcefully present today because all photography in art is somehow obliged to enter into a dialogue either with the notion of the photo as visual evidence or with the culture of the moving image in which the still now finds itself. Or both.”[iii]

However to observe documentary practice (for example) only through its current guises in and as art is rather like studying a tiger in a zoo: it acts differently and so do its observers. In needs to be studied in the wild too, however depleted the habitat. The same can be said for all those photographic practices that are not art (which, conservatively estimated, is about 99.945% of them).

So far what has gone on under the banner ‘philosophy of photography’ has been a continuation of the debates about medium specificity and the ontology of the photographic image and/or reflection on photography in/as art. Although this is may be familiar wine in new bottles there is every reason to continue drinking it. Those issues won’t go away any time soon. So let’s not forget that it is the wine that matters, even in these label-obsessed times. If I am pleased that Philosophy of Photography understands its task is to “provide a forum for debate of issues arising from the cultural, political, historical and scientific matrix of ideas, practices and techniques that constitute photography”, it’s because in principle it covers everything photographic. In practice, we’ll have to wait and see.

[i] Diarmuid Costello and Dawn M. Phillips, ‘Automatism, Causality and Realism: Foundational Problems in the Philosophy of Photography’ Philosophy Compass 4/1 (2009): 1–21.