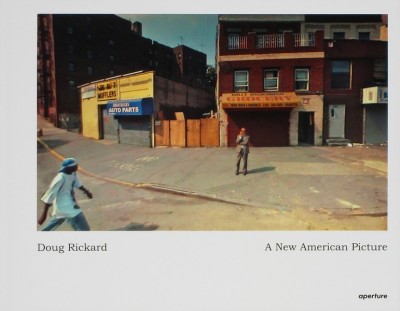 Doug Rickard’s Google Street View project A New American Picture was first exhibited as part of Anonymes: unnamed American in photography and film, the show I co-curated with Diane Dufour at Le Bal, Paris, in 2010. To mark that occasion Doug produced a book with White Press (the 250 copies sold out almost immediately). This is his larger version, which includes an introductory essay he asked me to write, titled ‘In the Frame’.

The essence of photography is done very quickly

with a flash of the mind, and with a machine.

I think too that photography is editing, editing after the taking.

After knowing what to take you have to do the editing.

Modern America has been a project, an experiment. As such, its self-image has been a matter of some importance. The critic Van Wyck Brooks once wrote of ‘the immense, vague cloud-canopy of idealism’ that spread over the national culture in the nineteenth century. This was a self-image of sorts, pervasive, persistent and problematic. But what has been so striking in the country’s most vital voices is the unwavering and critical concern with what goes on beneath that canopy, day-to-day, place-to-place, person-to-person. Mark Twain, F. Scott Fitzgerald, William Faulkner, Ralph Ellison, Edward Hopper, Jacob Lawrence, Toni Morrison, Douglas Sirk, Robert Altman, Walker Evans, Helen Levitt, Robert Frank. The list is long and the standards high. Popular or avant-garde, and frequently both, the work of such figures attunes us to what can be shown and known when looking not upwards, or from on high, but at one’s fellow citizens: anonymous, familiar and yet cut off by the systemic alienations so characteristic of our post-colonial, technocratic age. Beneath the canopy things are far from ideal.

When American movies address the state of the country, they frequently open with a view of the sky, tilting down until human life comes into view; or with a crane shot that lowers itself into the flow of citizens on the street. The device is literary but visual, and in a country that cannot do without definition it is familiar enough. So before we get to the subject matter of Doug Rickard’s A New American Picture, let us consider the ‘vantage point’ we are offered here.

As the reader is probably aware, these images derive from Street View, Google’s internet photo-environment of the world’s thoroughfares, launched in the spring of 2007. The Street View camera is mounted atop a purpose-built vehicle, two and a half meters above the ground. This is neither human eye-level nor the dispassionate overview we associate with surveillance. Soliciting neither empathic immersion nor cool distance, the point of view is fraught with psychological uncertainty. Travelling at a steady speed, the camera takes a cluster of photos every twenty meters or so. Stitched together they assemble an almost spherical panorama of the sky above, the streetscape and the road surface. On your computer screen an orientation must be chosen and a rectangular view must be framed – looking up, ahead, around or down. You may zoom in and out, although zooming brings you no nearer, and that point of view remains fixed.

It is said that when Guglielmo Marconi arrived back in England after receiving the first successful transatlantic radio signal, a journalist congratulated him by proclaiming that one person could now address millions across vast territory. Marconi was dumbstruck momentarily. He had been thinking only of one person communicating with another, but broadcast was indeed the significant breakthrough. Technologies are not their applications. What ‘use’ is Street View? Is it for something in particular or a set of potentials? An insidious act of surveillance? A gift for realtors and retailers? A guide for tourists, anthropologists and armchair explorers? A resource for artists and photographers? Google may not have anticipated Doug Rickard’s A New American Picture but it could not have ruled out the possibilities he has brought to light, nor the complex statement he has made.

In the age of satellite positioning systems, it is worth remembering how much of the important culture of the last century was premised either upon the chance encounter, the frisson of getting lost or the desire to disappear into the world. Georges Rodenbach’s Bruges-la-Morte, André Breton’s Nadja, Ralph Ellison’s Invisible Man, Alfred Hitchcock’s Vertigo, Situationism, street photography. But sometime around the advent of the mobile phone there was a profound change in our relation to spaces and places, and it was irreversible. Whatever else it is, A New American Picture may be the first important work about not being lost, about no longer being able to be lost. Even the lowliest backstreet is a grid reference. Every monetary transaction is a discernible location. Vanishing is all but impossible.

And yet, while these scenes derive from a mapped spatial order, their temporal dimension is another matter entirely. Photography finds itself, reinvents itself in an unprecedented timeframe. Firstly, if this is ‘street photography’, it has ceded the genre’s vital shutter and the choice of instant it affords. From a pre-frozen world, Rickard’s selections can be only geographic and compositional. (It is worth noting that he shoots his computer screen with the 35mm camera, the preferred equipment of the street photographer, but uses a tripod and a slow shutter speed.) Secondly, Street View permits a seamless pass over a terrain assembled to give the impression of permanent daytime. We can see on these pages the differences between overhead sun at noon and late afternoon gloom or glow, but in Google World the sun never sets. You will never see the bright lights of a city after dark. You will never see the velvet black of a desert or forest at midnight. The total visibility can be blinding, like the delirium of sleeplessness.

Lastly, these images are historical documents, marked moments as unlikely as they are irrefutable. Street View is always updating itself with second, third, fourth passes of its cameras. Each time the technology has improved, rendering greater detail and smoother transitions. Each time the light, the buildings, the people have changed, sometimes a little, sometimes drastically. The earlier images are overwritten. We have come to regard the internet as some kind of ultimate archive, a memory bank in which everything is stored forever. But it has been alarmingly remiss about archiving itself. We have almost no record of the history of the internet, and most of its representations of the recent past have been lost. This auto-erasure is likely to continue. Many of the images printed here are available only here.

However, photography fascinates because it escapes narrative and wrong-foots the easy explanations it can seduce us into making. Like the visitor with fresh eyes, the camera takes in everything. It sees without hierarchy or intention, with no knowledge of the before or after. In fact, it sees more than any human can. Its voracity and its veracity are inseparable. In the chosen image the smallest things may become insistent signs, calling inexplicable attention to themselves across time. Google software automatically blurs the human faces but what of bodies, clothes, gestures and dispositions? What of the cars, homes and storefronts? How will they be read in the future? The photographs cannot say.

This unpredictable significance is what troubles photography’s artistic ambitions. No matter what their makers’ intentions all photos end up as complex documents, as surfaces to be actively decoded. And the value of that documentation cannot be known in advance nor reduced to intention. Who is to say which detail from which image may prick our personal memory, trouble our identity or cause us to revaluate our view of history? For audiences this is what can make a photograph so compelling but for photographers themselves it is a humbling phenomenon, better embraced than resisted or resented.

A New American Picture presents us with single figures and occasional groups in small towns and at the edges of large cities. No downtown Manhattan, Chicago or Los Angeles. The focus is on secondary and tertiary places and thus, inevitably, on the intertwined politics of race and class. Moreover, these often feel like places from the past, in which the surveying Street View vehicle would have looked quite outlandish as it glided down the quiet, dusty streets. Citizens stare at it, perhaps with curiosity, perhaps with suspicion. The obscured faces do not tell. But these are contemporary places populated by contemporary people. The pernicious urbanite fantasy that small town and semi-rural American life belongs to the past goes back a long way. It is a fantasy precisely insofar as it allows the kind of symbolic separation or disowning that is the source of all prejudice. It was there in the 1930s when images made by photographers of the Farm Security Administration were used in the mass media to position the South and Midwest as a behind-the-times basket case in need of charity. (Suffice it to say, many of the photographers objected to that assessment).

For those who seek them, there are traces in this book of the rich history of itinerant photographers who have taken the American streetscape as their inspiration and muse. Rickard knows well this history, and my essay begins with a remark made by one of its guiding lights. Walker Evans resisted all artiness of technique in favour of the clear and unforced vernacular document of common life. Careful and inscrutable images may be gathered up as so much data for review. It is in the selection and sequencing that the work really begins. This is where the art is, and the politics too.

There is a levelling, subversive potential in the found photograph because any image can be vital if seen or deployed in the right way. Photography is selection, quotation, citation. The gap between one’s own photographs and those around us can be very small. With the camera, any camera, a portion of the world can be selected; photographs can be included within in one’s own photographs; one can make a photograph as if it were an already existing image; or one can repurpose an already existing image. As early as 1933 Evans was slipping anonymous news pictures of corpses into his photographic sequences. Later, photographing laborers in the street, passengers on the subway and scenes from a moving train, he pushed photography to be serial and systematic. His camera use could border on the automatism of the programmed machine. His various publications of intelligently made, intelligently sequenced photographs threw a door wide open. There is an unbroken thread that runs from his book American Photographs (1938) to Robert Frank’s The Americans(1958/9), Stephen Shore’s American Surfaces (1972), Jacob Holdt’s American Pictures (1977), Joel Sternfeld’s American Prospects (1987), Paul Graham’s American Night (2003) right up to Rickard’s A New American Picture.

And what of that persistent adjective ‘American’? Ambiguity was there from the start. Did Evans mean his photography was somehow American, or his subject matter, or both? Was it a statement of fact or a provocation? Does Rickard imply this new American picture is to reject and replace the old? To modify it? Allegorize it? All these American projects have been sincere acts of intervention, heartfelt attempts to check and keep open the idea of what the country is or could be. Every utterance of the word ‘American’ evokes something of that ‘cloud-canopy of idealism’, however unattainable. Perhaps rightly so, for what may be truly American is the capacity of its citizens and its culture to be attentive to shortcomings. Dissent is not anti-American. In a country that is an ongoing project it might well be as American as you can get.