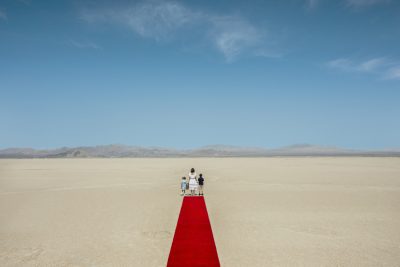 Following the collapse of the Soviet Union, one of the first American television programs to be broadcast in Russia was Santa Barbara (1984–93). Watching from her childhood home in Moscow with her family, Diana Markosian saw the soap opera as a window into a world of fantasy, escape, and the American Dream. Santa Barbara, California, became a mythical place that loomed large in the family imagination, and eventually, through her mother’s sacrifices, it became their home.

In her version of Santa Barbara, Markosian reconstructs and reexamines both the Russia and the United States of her childhood, tracing her family’s real-life move as their dream became reality. An extension of her documentary practice, the project allows Markosian to relive her childhood on her own terms, inviting us to step into her family’s collective memory, using archival family materials, staged images, and a scripted film.

Markosian grants access to her family’s story and also to her process. The tension between performance and reality is further complicated by her willingness to pull back the curtain and expose her tools. As it moves from Moscow to the United States, Santa Barbara tests and challenges the limits of truth, fiction, documentary, and memory.