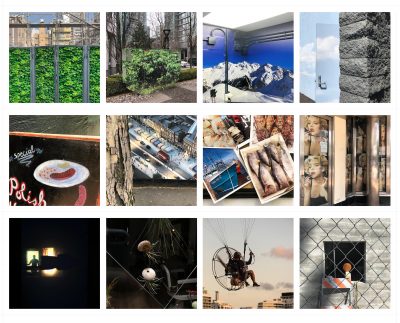 Dialogue is a transatlantic visual conversation. David Campany (New York/London) and Anastasia Samoylova ( Miami)  make photographs in response to each other’s photographs. No rules, no expectations. What has emerged is a long, winding, unbroken ‘sentence’ of observational pictures. It moves between theme and form, exploring reflexively the visual grammar, syntax, resonances, and conventions of contemporary imagery, all with a heightened sense of place.

The project began in July 2017, on Instagram. Already there are over 4500 images taken in the artists’ home cities as well as Italy, Spain, France, Germany, Belgium, Holland and across the USA.

For the first showing of the project, at Galerie Andreas Schmidt, Berlin, Dialogue was presented as a large split-screen video projection, accompanied by photographic prints. Lasting nearly five hours, the immersive image sequence can be entered at any point.

In February/March 2019 Dialogue was part of ‘Smart at Photography’, a group show looking at various art practices using the smart phone, presented at Zephyr, Mannheim, Germany.

A seven-hour silent single screen projection of Dialogue forms part of the thematic exhibition SEND ME AN IMAGE – From Postcards to Social Media at C/O Berlin, March 27 – September  2021:

An immense wave of images crashes against the exhibition wall in C/O Berlin. In his installation 24HRS in Photos, Dutch artist Erik Kessels forces viewers to wade through a sea of 350,000 standard photo prints wildly thrown onto each other. They depict the mass of images uploaded onto the image sharing site Flickr in one day fifteen years ago. Yet despite their sheer mass, the number now appears comically small. Now, the digital mountain of images on Instagram and Facebook grows by many millions of snapshots each day, images that have long ceased to be developed and printed in photo labs and instead circulate from one screen to the next via colorful ethernet cables and wireless connections.

Photography has always been a social medium that has been shared with others. But why do people communicate with each other using images? And how do the “virtual distillates” of photographs change society? The thematic exhibition Send me an Image . From Postcards to Social Media outlines the development of photography from a means of communication in the nineteenth century to its current digital representation online. The focus is on the dialogue between historical forms of traveling images from photography over the past 150 years and contemporary artists from the 1970s onwards who work with both traditional and modern photographic techniques, uses, and means of communication.

The exhibition considers the transformation of photography from an illustrative medium to one of society’s most significant means of communicating today. At the same time, the works shown illuminate phenomena such as censorship, surveillance, and the algorithmic regulation that affect many activities in a data-driven era. Today, images shared via social media not only spread rapidly but can also take on an independent newsworthiness and as “pure” messages can even spark different kinds of protests. The social dimensions of image communication is a second area of focus in Send me an Image . From Postcards to Social Media at C/O Berlin, curated by Felix Hoffmann and Dr. Kathrin Schönegg. A publication by Steidl Verlag appears on the occasion of the exhibition.