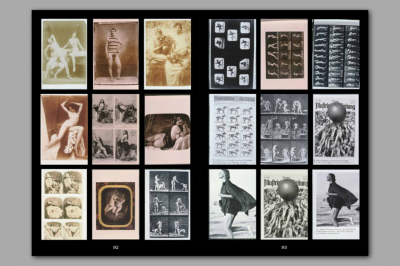 This publication is composed of all the slides Frido Troost (1960-2013) used for his classes at the Gerrit Rietveld Academie. Troost, art historian by trade, was a pioneer in collecting photography of all sorts. In his store ‘Institute for Concrete Matter’ many types of photography were represented, varying from da-guerreotypes to albumin prints, stereo photos to family albums. The images in this book come from all kinds of sources: paintings, advertisements, erotica, art objects, portraits, etc. They form a new collection that represents Frido Troosts associative way of looking. The slides are presented in blocks of nine, in the same construct as Frido Troost gave his classes, a non-hierarchal set up that invites the viewer to link the images freely. A controversial mix that covers a big part of the history of photography.

Frido Troost (1960-2013) was, among many other things, an art historian who taught at the Gerrit Rietveld Academie. What we have here is all the slides he used in his classes. What we do not have his words, but that is no disadvantage. This book is an opportunity to look and think, which is primarily what Troost aimed to encourage anyway.

I did not know Frido Troost, nor did I study with him, but I have taught photography and visual culture for half my life, and have amassed my own collection of teaching visuals. As a tutor I do not often have the opportunity to sit in on lectures by my peers, or look through their materials. The opportunity to enjoy and study Troost’s ‘educational archive’, his assembly of nearly three thousand images arranged in grids of nine, is a revelation. It also provides a prism for the following thoughts about what an education in the visual arts can or should be.

Beyond whatever pedagogical benefit it was to his students, it seems reasonable to presume that the putting together of this archive over a number of years offered something profound for Troost himself. To externalize one’s interests, concerns and obsessions, via the imagery of others, is a kind of auto-didactic therapy. Indeed, such therapy has a long and fascinating history. It goes back at least as far as the 1920s and 30s when vanguard artists and cultural thinkers began to collect and organize disparate material in their own ways from the rapidly expanding image world around them. They looked to diagnose something external about that world, and something internal to themselves too. Doing so could be a way of coming to terms with the often unconscious and unpredictable effects that images can have upon us. In Germany the painter and collagist Hannah Hoch made albums of clippings from the international illustrated press. Pictures of artworks sit next to pictures of fascists. Flowers next to children. Architecture next to medical images.  The pioneering art historian Aby Warburg assembled his visual experience and knowledge of world art into multi-image, multi-directional panels (known as the Mnemosyne Atlas). In the USA, the photographer Walker Evans put together a remarkable image scrapbook, Pictures of the Time. Once asked what the essence of photography was, Evans replied that taking pictures was the easy part. It is in the editing and sequencing that meaning is made, or at least suggested.

By the 1960s such practices were commonplace. Being an artist or image thinker in the era of the mass media (which is also the era of the mechanical reproduction of art) meant living with or through ever larger quantities of pictures. As Colin MacCabe put in in his biography of Jean-Luc Godard, the great image magpie of the French New Wave cinema,  “…in a world in which we are entertained from cradle to grave whether we like it or not, the ability to rework image and dialogue […] may be the key to both psychic and political health.” Have your way with images, or they will have their way with you. Troost may well have been having his way with images. Indeed, I imagine this was both unavoidable and necessary. Any good teacher is hoping to illuminate their material for themselves as much as their students.

Teaching cannot be objective. The most engaging teachers teach what engages them, and they know that what they present will straddle the familiar histories, canons and curricula, and their own fascinations. There are moments in Troost’s archive where the familiar histories of art and photography are present, but there are clearly moments that feel more obsessive, when Troost seems to linger more than strictly necessary (whatever that means) on particular themes and motifs. The Erotica. The Airships. The classical statues. One can only imagine the classroom conversations.

There are also moments when Troost’s visual method appears to confront itself. We see pages from Ernst Friedrich’s book War Against War1924, in which shocking images supressed or censored during the First World War were rescued from archival oblivion to help make a pacifist polemic. There are images of the portrait photographs made by August Sander from his epic project People of the 20th Century. (In 1951, Sander had written to a friend: “A successful photo is only a preliminary step toward the intelligent use of photography… Photography is like a mosaic that becomes a synthesis only when it is presented en masse.”)  Within Troost’s own blocks of nine we find the typologies that Bernd and Hiller Becher assembled from their life-long photographic study of anonymous industrial architecture. We also find some gridded sheets from Gerhard Richter’s Atlas (1962-), the project in which he has gathered images that have informed his paintings and his life. I get the impression Troost that knew this lineage well, and understood how photography, the very medium that made modern art history possible, is no innocent transmitter of images and culture: it transforms them profoundly, and in accordance with its own complex terms. The art historian’s photographic tools shape what he wants to make visible.

In my work as a teacher and writer, I have always structured what I do visually. The backbone of a lecture is built from a sequence of selected images. Hardly ever are visuals chosen to illustrate an argument or a theoretical point. The images come first and the lecture or seminar are the occasions for thinking about them, around them, with them, through them, against them. When I write essays, for books or magazines, the approach is much the same. The pictures are selected and sequenced first.

That moment when the visuals are present and the words have not yet taken concrete form on the page, or in the mouth, is special. It is full of possibility and anticipation. Sometimes in lectures I will first present my slideshow, in its entirety and in complete silence. I will pause at the end before beginning again. That mute time with the images, before the words begin to flow, is something I feel my students should have too. And in this book, you have something similar – Troost’s selected and sequenced images prior to the flow of words.  The initial confusions give way, and the pleasures of thinking while looking begin to take shape.

For a several years I made 35mm slides, projected for my students with a Kodak Carousel. I switched to digital as soon as the lecture theatres had digital projectors. But I have never used a flatbed scanner to copy images from books and magazines. I have persisted with a camera and copy-stand, the way Troost’s slides were made. The ‘appropriation artist’ Richard Prince once confessed that it was only when looking at a printed image through his camera and making a photograph of it that he was really able to look carefully, to think about it, analyse it, contemplate it. Imaging an image, through the intensity of a viewfinder, allows the full force of its powers to be felt in a very concentrated way. To photograph a printed image is to steal it, to honour it, and to transform it.  A scanner has no viewfinder, and neither does the Internet from which most art teachers now gather their visual resources with a click of a mouse and in questionable resolution.

In his remarkable book Le Musée Imaginaire (translated as The Museum Without Walls) the art historian, novelist, adventurer and politician André Malraux suggested that the experience of art in its reproduction is what leads to its ‘intellectualization’. This newly reproduced and intellectualized field no longer comprises isolated and scattered ‘works’ of art, but ‘moments’ of art history.  Malraux certainly had an important point here, but it was not absolute. The intellectualization of art comes not only through its reproduction but through the words and language, typeset or spoken, that tend to surround and overwrite the reproduced image. Take away those words and what do we have? We are back to the scrapbook of enigmatic fragments, part social, part private, full of possible meaning yet open-ended.  Yes, there is order and purpose in Troost’s archive of slides, and while it may suggest lines of thought, or even ‘arguments’, they are in the end only suggestions, paths wandering off into the dark forests that are the true home of all images. For in the end, images cannot argue, even in forceful combination. The dark forests are wild and unruly.