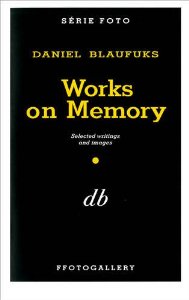 The artist Daniel Blaufuks’ book Works on Memory contains a long exchange between Blaufuks and David Campany on the subject of history, memory, technology and photography.

This is an extract:

Dear David, yes, I like to vary my ways of working, as I am also interested in different ways of showing images, although I think my approach to photography, or film, is always more or less the same. And yes, I am very interested in memory and history, or, rather histories, personal memories against the historical background. To try to answer your question, I think the medium, unlike most other mediums, has indeed a strong responsibility in these fields, as it creates its own constructions and meanings of reality, past or present. So, I am very aware of the importance of “reading” an image, understanding its possible layers and connections, perceiving that the family snapshot or the war image are indeed not “natural”, but are as close as we get sometimes to the information lying within. That is why I am interested in documentary film, as well, having made some myself, although I consider them and my photographic work full of subjective meanings. Maybe Barthes and Benjamin would approve of that.

Looking across the range of your work I don’t so much see a common theme as a common tension. It’s quite a productive, animating tension between the desire

to know and the desire to speculate. The ‘what is’ and the ‘what if?’ You’re something of a historian, a detective even, but there’s also a very playful streak. Does this make sense, does it ring true with you?

Well, not long ago someone, a recent acquaintance who didn’t know my work

very well, called me “the curious researcher”, which I took as a wonderful compliment. I am indeed someone interested in various subjects, and obviously that interest will find its way into the work, sometimes even undesired. And I do like to play, to follow a direction that some life-turn or event is leading me to. Also I don’t feel, like many other artists do, that I do have to stick to one constrained subject or way of working. I prefer to imagine that I am sometimes “writing” poetry and other times fiction or essays, some more profound, some more playful. But I do know that at the heart of every project I do, the underlying theme is my interest in memory and how we deal with it.

Is it photography itself that is being memorialized in your projects, a kind of working through of the privileged place once given to the photographic image as a token of the past? I ask this because my students, and more so my young children don’t seem to have this relation to photography. They see it more as a token of exchange than of memory. There’s not that great endowment of the still image with the weight of history. For example your book Terezin begins with an image of a room you saw in a book by the writer WG Sebald and ends with you having followed its threads to a wartime ghetto. Reading it I felt two things. The first was the sensation of being with a ‘curious researcher’, as your friend put it. The second was a realization of the immense historical burden placed on the still image, which it can barely carry.

But so is text or even a single word burdened. We can regard it as a simple note or as a powerful transmission device. Photography is an alphabet, so to speak, which contains many possibilities of depth. I agree, although our relation with the medium is quickly changing, as it becomes more and more fluid, not only in the making through digital cameras, but in easy sharing through the internet. But not every writing is necessarily literature and not every photograph needs to carry that burden you mentioned. The question is, if we are capable of reading the language the photographer is writing, is it a song or an aria? Cinema, in a way, is going through the same period of interrogation, as we lose the habit of seeing it on screens and among strangers, and therefore are losing the reverence we once had for it. I cannot work with photography ignoring its ancient power of becoming something like an instant memory of the present. So I think I am also constantly questioning that same power, that lost aura.

In many of your projects that questioning takes the form of a movement, often restless, cursive and curious between one image and the next and the next. Can you say something about this? How much of your work is constructed in the editing and sequencing? And how much do your projects evolve in the course of shooting and editing?

I am not interested at all in the single image, but in the sequence or flux of images, in a kind of cinematic prose. So, while shooting one image I tend to be thinking of the previous one, which does not mean that in the end this will work out. Same with my video work: I have an idea, but not the final product in my head. That will hopefully evolve from the shooting, the editing and the thinking while doing it. In the editing, I can change everything, by not only sequencing it, but most of all by choosing and erasing whole sequences. As with video.

It’s possible that editing and assembly are more integral to film and video than they are to photography. But it’s fascinating how photography became a modern medium in the 1920s and 30s through a suspicion of, or a need to exceed the single image.  I think of László Moholy-Nagy declaring: “the picture loses its identity as such and becomes a detail of assembly, an essential structural element of the whole which is the thing itself. In this concatenation of its separate but inseparable parts a photographic series inspired by a definite purpose can become at once the most potent weapon and the tenderest lyric”; or August Sander: “A successful photo is only a preliminary step toward the intelligent use of photography… Photography is like a mosaic that becomes a synthesis only when it is presented en masse”; or Walker Evans: “After knowing what to take you have to do the editing,” etc. etc. This is still the dominant attitude – very few contemporary photographers make and present images in isolation. Suites, series, archives, albums, typologies, montages, collages, juxtapositions. Painters never felt this so strongly. Are there connections for you between memory and this multiplicity in photography?

Very few photographs function entirely on their own, I would think, apart from advertising, fashion or news photography. The original image from Terezín in the Sebald book (by Dirk Reinartz) is very strong by itself, but I was unable to halt there, I needed to understand and later work on the context. We can present a single image of a dead soldier and elaborate a long speech on the memory of war and of private suffering just from that, but memories are so much more complex than a single vision. How many images do we see alone during one day? And how many points of view from the same subject?

Memories are images from images from images. Do we need memories? Do we need photography to remind us of memory? I don’t know. Also, by creating work, we are creating new memories. An image is a memory of something the photographer saw and that is about to be imprinted on the memory (long lasting or probably not) of the viewer. That is also one of the paradoxes of photography, we are actually seeing in our present something that someone saw in the past and eventually others will see in the future. We could say the same of painting, but the fact that in photography reality does not undergo any major transfiguration or construction (like in cinema), makes this eerier.

I agree that the isolated image is always a little eerie. But this is because the stilling and muting of the world is actually a major transfiguration. But might it be that very few photographs function on their own because they’ve not been allowed to? The instrumentalism of the archive and the magazine photo-essay, the narrative structure of the family album and the news report, such things certainly forced the image into the service of larger arguments and put it into relations to other images. This shaped viewing habits profoundly, perhaps to such an extent that we have trouble escaping them. Bourgeois culture assembles its version of history, memory and truth. Its critics pull them apart and reassemble them to reveal the mechanism. The eeriness is the uncontainable, unaccountable remainder that is revealed.

You are entirely right about the transfiguration of the world through muting and stilling. But so is the black and white photograph that we take for the absolute truth, more even than the color image. Generally we do not perceive this transformation, same with photographs in books or magazines. We do not consider that the real object has a proper size and framing defined by the artist. We take the reproduction for the truth, which is something that does not happen with the reproduction of paintings, where we know instinctively there is somewhere an original. Agnés Varda talked in her last film abou the fact that her generation saw most of the paintings in reproductions in black and white, so that they had to add mentally the colors to it.

That reminds me of André Malraux remark’s on the way photography invented modern art history: “Baudelaire never set eyes on the masterpieces of El Greco, Michelangelo, Masaccio, Piero della Francesca or Grunewald; or of Titian, or of Hals or Goya – the Galerie d’Orléans notwithstanding […] What had he seen? What (until 1900) had been seen by all those writers whose views on art still impress us as revealing and important; whom we take to be speaking of the same works we know, and referring to the same data as those available to us? They had visited two or three galleries, and seen reproductions (photographs, prints or copies) of a handful of the masterpieces of European art; most of their readers had seen even less.”

But counter to that strong critique I think of all those moments when photography or film really has permitted us knowledge of the world, or even allowed us to contemplate it. How do we balance such things?

I don’t know. Eventually by learning how to read images and trying to understand their meaning and poetry, more than their actual information.

Yes, meaning and poetry. We are circling around the central tension in photography between ‘artwork’ and ‘document’. It’s a tension that was there from the beginning but has been explored in very different ways since then. It’s certainly a tension that you dramatize in much of your work. Many of your most striking projects contain images of what we might call the ‘apparatus’ of the analogue archive  – the library, the postcard, the hand-written letter, celluloid film frames, files of various kinds, physical traces left behind, monuments and memorial sites. The material manifestation of the technology of modern memory. Put together they add up to an inventory of the ‘analogue’ archive. There is a kind of politicized melancholy at work here, I sense. A kind of taking stock within reach of the spectre of the digital with its very different regime of the visual (I think of the difference between the hand-written letter and email, between the filing cabinet and the folder on a computer hard drive, between the celluloid movie camera/projector and the digital equivalent, the manual typewriter and the laptop computer). The digital may produce infinitely more images but its apparatus is not so photogenic, slipping away from the visual register into the virtual. At the same time we human beings remain irreducibly physical beings with physical needs, analogue needs if you like…