This Country. Thoughts on the photography of Chris Killip and Graham Smith 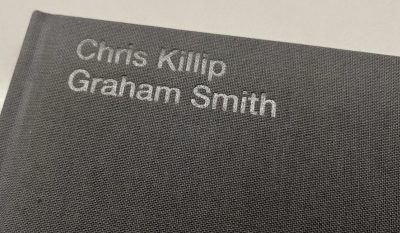 This Country. Thoughts on the photography of Chris Killip and Graham Smith

Pubs are neither the world of work, nor home, but they are deeply connected to both. They are also connected to class consciousness, and gender too. My home town was socially quite varied, and our pub had a ‘Public Bar’- no carpet, hard chairs, dart board – and was used mainly by working class men; and a ‘Saloon Bar’ – carpet, soft chairs, used by middle class men and women, and sometimes by the men from the Public Bar when they brought their wives on a Sunday. Whether people are having a good time or getting into arguments, there is always a sense of theatre to pubs. The emotions are slightly intensified and acted out a little. From behind the bar, or through the frame of a camera, you can feel this quite strongly. I bought my first camera from a regular customer back then, and I’m sure the environment of the pub had played a role in my growing interest in social observation. In the book accompanying the 1991 Museum of Modern Art (New York) exhibition British Photography from the Thatcher Years, curator Susan Kismaric describes the pub as “a stage on which the drama of […] individual lives are played out.” I can’t speak for Killip or Smith, whose work was included in that now-famous show, but I imagine they would have agreed, or would have at least intuited the connection between pubs, looking and photography.

The present publication takes as its starting point an earlier exhibition, which in the world of British photography looms even larger than the New York one. In 1985, London’s Serpentine Gallery presented around 130 images by Killip and Smith under the title Another Country: Photographs of the North East of England. It was open only for a month, and there was no catalogue, just a small brochure.

At the time, British photography was in transition, if not crisis. Well, to be fair, it’s always in transition, if not crisis. That’s the nature of photography, and of Britain. The bitterly divisive demolition of the industrial working class was well under way by the mid-1980s. It had been underscored by the miners’ strike of 1983-84. The painful shift to an economy based precariously in the financial, leisure and service sectors had started. But class structure and class identity are not so easily dismissed or transformed.  Political and economic power was being centralised in the south of England, leading to a rift with the north that is as raw today as it ever was. In a piece for Aperture magazine in 1986, Mark Haworth-Booth saw how “visitors to the Serpentine were offered a view of ‘another country’ that is less than 300 miles away but strangely out of sight and out of mind.”[1]

On top of all this, and completely related to it, the world of independent photography was riven by anxieties, especially as to what documentary practice was, or could be. Killip and Smith had been finding their own ways to work, with collective ties to like-minded people.  In 1979, Smith had said:

The group I worked with (Amber Associates) has for the last ten years concerned itself with creating a lifestyle around independent film and photographic production in the North East. The keystone of our production is “commitment ” to a chosen region (with emphasis on the working class). The style is unashamedly documentary in its basis. We maintain that documentary can be extremely personal and feel it unfortunate that the word has become synonymous with factual journalism. We see ourselves as artists working within that tradition which might be described as a “creative interpretation of reality”.[2]

Smith’s remark appeared in the catalogue of the Hayward Gallery exhibition Three Perspectives on Photography. That show was an attempt to diagnose the differing approaches to the medium that seemed to be coming to something of a head. Alongside the work of the new feminist-activist photography, and a strand of socialist practice emerging from conceptual art and wary of anything ‘poetic’, Smith’s approach, like Killip’s, seemed the most traditional. It tapped into the lyric and expressive documentary modes pioneered in the 1930s, notably by Walker Evans in the USA and Bill Brandt in England. Indeed, Smith was probably paraphrasing the Scottish film-maker John Grierson. “The creative treatment of actuality with a social purpose.” Grierson is credited with coining the term ‘documentary’ back in 1928.

It is important to remember that at the beginning, documentary had its roots in the arts. It was understood as necessarily experimental and enriched by its unresolvable complexity. Creativity/actuality. Treatment/purpose. These are generative tensions that are not easy to understand.  However, documentary form soon became oversimplified in the hands of populist illustrated magazines, newspapers and then television. But there have always been practitioners, in film and photography, that have fought for an art of documentary complexity, and for an audience that might be willing to embrace it. This has never been a simple task, especially in the face of the mass media’s often authoritarian co-opting and debasing of documentary into simpleminded ‘concerned messages’.

It has not been easy for critics and reviewers either, especially if they are not from the same communities as the photographers or their subjects. As Graham Smith tells us in his words for this publication, he suffered at the hands of the British press, and by consequence so did some of the people he had photographed. Even though he had faith in his work, the high-minded but unthinkingly negative reception made Smith guarded. He withdrew his engagement, rarely exhibiting or publishing. There has never been a book of his work, nor a major exhibition. I, for one, mourn that loss. So, I am beyond happy to see a much more nuanced and welcoming climate emerging for rich and layered documentary work. New generations will get to see, enjoy and think about Smith’s remarkable photographs.

Killip’s trajectory was different. By the time of the Serpentine show, he had already published Isle of Man: A Book about the Manx (1980), and the Victoria & Albert Museum acquired all sixty-nine of the prints. He was approaching what would turn out to be his peak as an image maker, producing work in the North East of rare compassion and layered beauty. These photographs formed the core of what he showed in Another Country. By the early 1990s Killip knew his best work was done and put his energy into teaching. He continued to exhibit, museums acquired his prints, and in the 2010s a number of books of his work were published.

In an interview for the BBC in August 1985, Killip pointed out:

I have no interest really in photography. The interest is in what you can show people, what you can reveal. If all the cameras or film became unobtainable tomorrow, I would still find a way to go back to the people that I’m interested in, and I would write, probably try and learn to draw much better than I do now, but I would find a way.[3]

I imagine Graham Smith’s sentiments at that time were quite similar, and they are not uncommon among the very best photographers working right across the documentary tradition. David Goldblatt, who photographed the effects of apartheid in South Africa, comes to mind; and in a very different way Nan Goldin, who has documented her troubled bohemian life. Both have been much more ready to talk about their subject matter than their photography. You don’t hear this from painters, and only occasionally from writers. Photography allows itself to be shaped by an abiding commitment to the world. In fact, that commitment, greater than the commitment to the medium itself, may even be essential. Every decision, from camera position, composition and timing, through to printing, captioning and presentation, is driven by an ethical need to at least try to communicate what is important and meaningful to the photographer about people and their circumstances. Yes, Killip and Smith made some of the most extraordinary pictures of any artists in the second half of the twentieth century, but they did it through a commitment to what they wanted to photographed, not to some cultural abstraction called ‘Photography’, or ‘Art’.

For the last ten years I have photographed in Middlesbrough, nowhere else. Like my parents I was born and brought up in the town. My father, mother, stepfather, and their friends are all good drinkers, and they have always used the same few pubs, which we consider to be the best in Middlesbrough. They are used by those who live on the edge, whose future is the next good time, the next good drink. It’s never clear to me why 1 photograph in these pubs. It might be that I’m using the camera as a way of looking at friends, family, people from their past and, in turn, my background. The truth might be that the camera is just an extension of my drinking arm.

This was his ‘bio’ for the catalogue of that MoMA show about the ‘Thatcher Years’. The other photographers – Chris Killip, Martin Parr, John Davies, and Paul Graham – offered long lists of published articles about their work and the exhibitions they had participated in. Smith clearly wrote what felt needed saying in that context. In fact, years later he took to writing in pencil on the backs of his prints. Memories and autobiographical thoughts. Gently literary descriptions of people, places and events. Not so much setting the record straight, as enriching the work, and puzzling over exactly why he had been so compelled to make it.

The choice Chris Killip and Graham Smith made to use larger format cameras was key to their work. While there has long been a drive within photography toward speed and efficiency, they embraced slowness and difficulty (and financial expense). It exerted a sense discipline as much as tradition, and was a way of instilling a feeling of purpose in their work. They put themselves and their cameras in demanding situations, where they had to think in the moment about what they were looking at and how to picture it. It is physically exhausting work that quickly drains the nervous system. Small format photography can do this too, of course (when asked what it was like shooting for his project The Americans on his 35mm Leica, Robert Frank replied: “I was in pretty good shape back then”) but the challenges with large format photography, particularly of dynamic scenes, are more intense. Very few photographers manage to sustain this way or working over a lifetime. If we couple this with the fact that both Killip and Smith were committed to particular social situations that were ephemeral and in transition, we can see why it was that their photography came to an end when it did. Life goes on of course, until even that comes to an end. But the images made by Killip and Smith will live on.

It is often tempting to look at a body of photographic work as being a product or symptom of its time. On some obvious level this is bound to be true. But I think it’s truer of work that is typical of its era. Work that is exceptional, like that of Chris Killip and Graham Smith, is more mysterious, and much less easily explained. So, it is best to be thankful that it even got made at all.