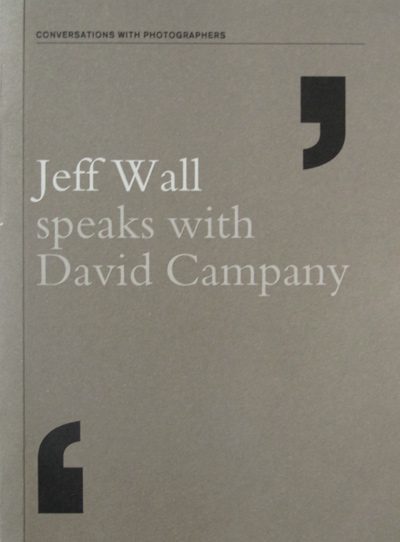 This little book is part of the series published by La Fabrica, Madrid.  It comes in a box of five other book-length conversations (John Baldessari, Hannah Collins, Axel Hutte, Gonzalo Puch and Wolfgang Tillmans). English and Spanish versions are available.

My conversation with Jeff Wall is transcribed pretty much verbatim. Here is the opening section:

Jeff, it’s probably not possible but let’s try to talk specifically about photography and your relation to it. Many of the great photographers of the past came in to their own particular relation to the medium and more or less stuck with it, maybe peaking early and staying with that approach. From the beginning your relation to photography seems to have been much more complex, less certain perhaps, and the strength of your work has emerged from this.

Yes, I guess at the beginning I was kind of testy with photography, or at least unsatisfied about a lot of things, and that made it seem like I had some kind of issue with the medium itself, but it wasn’t the case. It was really just my way of trying to find a handle on this huge medium. I think it’s a very elusive medium, don’t you?

I do. Was that feeling of being outside photography coloured by what other people were doing with it?

I just felt confronted with it in some way. Slowly over a period I moved toward it and found myself really fascinated by it. But at the same time I was dissatisfied with what you just described. I noticed at some early point that many famous photographers who one admired did have a period when they seemed to accomplish their best work and then after that it didn’t seem to be the case any more. I remember that worried me right from the beginning.

Many of them achieved their best work before the age you arrived at when you decided photography was really the thing for you.

I was coming from an angle that was so much informed by the other arts that it couldn’t help but have an effect. And I feel there is a different relation between the medium and the artist in painting. The painters I admired never had a short burst of accomplishment followed by something else. They kept developing different ways of painting that went on for decades and I always felt they had a much more powerful or assured relation to their art form.

Does that mean there was no such thing in photography as ‘mature work’, the way a painter might arrive at mature work after a long, long period?

It could be. I have never though of it that way. But also a painter could arrive at something very quickly, very young, and sustain it or change it, evolve. Maybe one counter-example is Cezanne (if we’re talking about the best artists) because he seemed to have been doing quite inferior painting for a stretch and then when he stopped doing that and came into his own he sustained that for a period of time. But even he’s a bit of an exception. If you take other artists form the same period like Seurat or Manet you don’t see that. You see early work that’s very accomplished and then it just keeps going and changes and gets more mature. So painters seemed able to have a more sovereign relation to their medium, and I wanted something like that. I wouldn’t have wanted to accomplish something over ten years and then not be able to match it. Maybe time will tell us that I’m in that boat anyway–but I don’t want to be in that boat, obviously.

Already we’re drifting from photography but let’s go with it. I guess the other parallel with painting that strikes me as very stark in your work is the commitment to the single image which is there from when you begin making your lightbox transparencies in the latter part of the 1970s. I can think of very few artists or photographers who were making such singular images at that time. Singular pictures with a capital ‘P’. Everything seemed to be serial, sequential, typological or in suites of some kind, which was an inheritance either of Pop and Conceptualism or art reportage modelled on the photo-essay. Even today there are comparatively few who are willing or able to work in a very singular way. Where does that come from?

I think it comes from the same source. One of the issues or conditions with photography as it was practiced was the idea that the single picture wasn’t adequate: one had to delve into something and report on it in an essayistic sort of way. I thought there was too much subservience to the motif or subject matter in that. The practice was driven by the availability of significant subject matter and once that subject matter was somehow done, then what? A lot of photographers made their work in relation to a specific situation. Maybe Walker Evans is a good example, because it was the Depression era in America that allowed him to do what he did and he did it perfectly, and that was certainly enough. But that wasn’t the position I wanted to be in and I think it has to do with photography’s instinctive commitment to subject matter, as if the subject matter is what’s important. Such photographs, no matter how good they are, are devoted to the revealing of the subject matter. But that’s not what modern painting is about. Modern painting is about making paintings, and therefore about finding the occasion or motifs that will make that possible. There’s no important artist whose work is devoted to a single subject or to the meaningfulness of the subject. Subjects can be important and timely but they don’t have that relation to the picture. So maybe that’s something that I insisted on for my own practice. That’s why some people say “Oh yes, it’s borrowing from painting”, which it probably is in that sense, but photography is perfectly capable of including that.

Yes, Evans’ pictures do look like documentary photographs, and in many cases they are documentary photographs, but they’re done better than other documentary photographs are done in terms of picture making and maybe that’s also what he meant by ‘documentary style’. It seems he was fated to have a particular relation to a particular range of subjects. When the opportunities for those subjects seemed to have passed, his career really changed gear. On the other hand he was very aware of just what we’ve been talking about, that there should be a suspension of this engagement with the subject matter to allow an engagement with representation. He was perfectly aware of it, yet he was still subject to it, it seems. That’s what’s so perplexing about Evans.

He was a maker of extraordinary single images, more than enough to be a great museum artist, but he was also very committed to editing, to exploring how images represent by playing them off each other in a highly reflexive way. That’s what he did so well in his books and his work at Fortune magazine

His individual images are first rate but he wasn’t that interested in them being experienced that way.

Do you think they could only have been made that way, with that attitude? It strikes me that many of the greatest photographs made between the 1920s and the 1960s  (photography’s high modern period, I guess) came out of that hybrid circumstance in which art and its emphasis on representation was there in the minds of those photographers but was not the sole or primary concern.

Evans knows a lot about art, he follows it. But he’s not necessarily caught up in the ‘canon’, not before the 1960s anyway.  Evans’ precursor Atget is the supreme example of this, pursuing his work at a significant remove from art and making the most of those fluid, hybrid circumstances. A certain hybridity was open to you but in a different way, from within art. You were from the start very much an artist making photographs yet knowing there was this relation to other forms of photography outside art.

I think I had it much easier, because the field changed shape so much since the end of Evans’s period. Around 1970 when I began to really get interested in photography, Evans was still around, teaching at Yale, and I guess I could have gone to Yale and studied photography and got in his class. It never occurred to me. But, by that time, the idea that one had to be a photographer by being in the institutions that sustained photography—essentially journalism–was over. I wouldn’t have even thought about practicing photography the way Evans did – getting a job in photography and then maybe trying to make a creative statement within that situation. It seemed totally unnecessary. Great work got made that way but there was this place called fine art that was absolutely open to anyone working in any way by that point. So it was much easier to move right to the centre of the problem without ever having to engage with that institutional network of journalism and so on in order to even get your photographs seen. My generation never had to do that. There were still photographers working in that way, as itinerants on the road, writing their Leaves of Grass–poetic journalism. Some of it was very good, like Garry Winogrand, Robert Frank and Lee Friedlander, but a lot of it was really tired. When I saw Frank’s The Americans in the early 60s, I thought it was great. I thought a lot about it and found that I definitely didn’t want to do anything like that. Evans and Frank had done it in ways that seemed perfect. It seemed unnecessary to even try to do that, to imitate the journalist-writer.

Some of the images discussed in the book: