Getting it Exactly Wrong – a conversation with Roe Ethridge 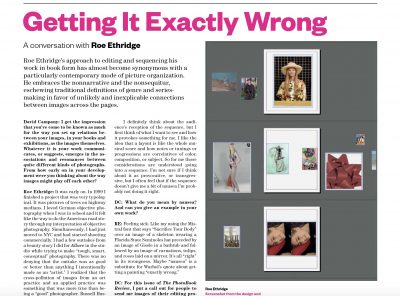 Getting it Exactly Wrong.

DC: I get the impression that you’ve come to be known as much for the way you set up relations between your images, in your books and exhibitions, as the images themselves. Whatever it is your work communicates, or suggests, emerges in the associations and resonances between quite different kinds of photographs. From how early on in your development were you thinking about the way images might play off each other?

RE: It was early on. In 1999 I finished a project that was very typological.  It was pictures of trees on highway medians.  I loved German objective photography when i was in school and it felt like the way to do the American road story through my interpretation of objective photography. Simultaneously, I had just moved to NYC and had started shooting commercially.  I had a few outtakes from a beauty story I did for Allure in the studio whilst trying to make “tough, smart, conceptual” photography.  There was no denying that the outtake was as good or better than anything I intentionally made as an “artist’.  I realized that the cross pollution of images from an art practice and an applied practice was something that was more true than being a “good” photographer. Russell Haswell put me in the Greater NY show in 1999 with that outtake of a beauty model and an image of a UPS/ mail store. That was the first public showing of that approach.

DC: I agree about the close relation between so-called ‘art’ photography and applied or commercial photography. I enjoy those books from the 1920s that tried to show these connections. Roh and Tchichold’s Photo-Eye, Moholy’s Painting, Phptography, Film. Back then there was a broad sense the one should try to make good photography wherever in the culture one could, and the art part would take care of itself. That’s easier to accept in hindsight, but when practitioners like you do it in the present it always feels like a provocation, or a transgression, as if on some level these diverse image forms shouldn’t be seen together. Over the years I can tell your editing has become incredibly nuanced but is there still a sense of provocation or transgression. I mean either for you, or as something you’re bearing in mind for your audience?

RE:   I know there’s a word for when influence skips a generation but I can never remember it.

For me it was the work of Paul Outerbridge that really got me excited,  but I also had this guilty pleasure of Stiechen and other early Pictorialist images. For some reason, what pops into my mind right now is Outerbridge’s image Ide Collar (1922) versusAlfred  Steiglitz’s Spiritual America. Funny how they speak to each other.

I definitely think about the audience’s reception of the sequence but I first think of what I want to see and how it provokes something for me.  I like the idea that a layout is like the whole musical score and how notes or tunings or progressions are correlatives of color, composition or subject. So for me those considerations are understood going into a sequence. I’m not sure if I think about it as provocative, or transgressive, but I often feel that if the sequence doesn’t give me a bit of nausea I’m probably not doing it right.

DC: What do you mean by nausea? And can you give an example in your own work?

RE: Feeling sick. Like my using the Mistral font that says “Sacrifice Your Body” over an image of a skeleton wearing a Florida State Seminole’s hat preceded by an image of Gisele in a bathtub and followed by an image of carnations, tulips and roses laid on a mirror. It’s all “right” in its wrongness. Maybe nausea is a substitute for Warhol’s quote about getting a painting “exactly wrong”.

DC: Sounds like provocation to me. Or maybe it’s an itch. How long does it take to arrive at this kind exact wrongness? Do your books come together quite easily or is it a slow process? Do you edit alone of with others?

RE: I guess I feel like whatever I’m doing is in the spirit of discovery for myself and maybe that can feel like a provocation or a kind of insubordinate attitude.

The books have all been different.  Sometimes this is because of the duration of the shooting.  Like the Le Luxe/New Construction for Goldman Sachs was a 7-year project that probably took a year or more to edit.  Shelter Island and American Spirit came together in a couple months.  There are usually countless revisions with some major changes at the last second.  But they are worked on until they are completed and I have never started one and not finished it.  I’m currently working on a sequence that started in June and will need to be completed in one iteration by January another by April, and it will possibly continue after that.

DC: For this issue of the Photobook Review I put a call out for people to send me images of their editing process. Most sent pictures of printed images laid out over floors. At first you sent me a jpeg of the logo for InDesign. Then you sent a number of screenshots of your books in progress. So I presume you do your book editing on screen. Do you do any editing with actual prints, or is it all done on the computer? Does the screen give you a better understanding of how your photographs work? I guess they are pure and immaterial images on screen.

A lot of your books feel like elaborate brochures for imaginary and maybe neurotic corporations. You like to push glossy lifestyle imagery into awkwardness, or place it next to something abject or forlorn. In this the books often feel like a re-edits of America’s self-image. Taking familiar things, but shuffling the order so that the fantasy begins to question itself, unravelling before one’s eye.  I like the idea that someone looking at these books in fifty years could actually get quite a good sense of how messed up society was. Or maybe things will be way worse in fifty years and your books will seem like fond remembrances!

RE: I made a few books by hand but they were one-offs or zines or an artists’ book.  I remember someone trying to explain how to use Quark Express and it was like unintelligible to me.  However working in the magazine world and seeing the way a magazine came together on screen had me chomping at the bit.  When I started using indesign it was fairly intuitive and then I was off to the races. I think it was like 2003, and I have never sequenced a book or story any other way since then.

I feel like it goes back to the notion of writing the whole musical score.  I can see the images as thumbnails, almost like they are equivalent to notes in a score.  Then I can bring the image forward and see it in direct relation to its page left, page right, verso etc. I also love the ability to use the margin as a place stacked with failed attempts.  Sometimes the margin is where I find combinations of images I would not have predicted and they wind up sequenced in the final book.

DC: It’s interesting that you found InDesign to be so intuitive to use. That moment when for some reason we just ‘click’ with a particular programme is quite profound, especially when so much image-related technology feels alienating. I use keynote for so much – book editing, exhibition ideas, lecture presentations. A one-stop shop. I like that you found space for chance in InDesign. That seems crucial to how you work – the ability to surprise yourself, to come at things sideways.

RE: I also use InDesign to sequence my shows, although I find It helps to have a scale model and then it almost always changes once the installation gets underway. I recall now that I made prints for the layout of Spare Bedroom based on what I had laid out in IndDesign. It was such a relief to go back to the saved variations that I had dismissed earlier in the process.

Regarding the chance aspect I think I had to learn to embrace it.  I think I was very self-conscious about photography being an easier medium.

DC: I think of many of your images almost as Readymades, like they already existed somewhere and you happened to be the one to find them. And then, when you arrange them it often feels as if you’re showing us things you’ve found. Does this make sense?

RE: I love what you are saying about the found object and the readymade.  I think that is such big a part of my education and earliest affections for art. By two big early influences were Lee Friedlander and Andy Warhol.

DC: Photography has such a complicated relation to chance. It’s always there but it can be destabilising unless you can figure out your relation to it and make it work for you. Just coming back to the Readymade, I guess Duchamp’s idea of nominating an object as a work of art is a pretty radical act of editing. Picking something out from the continuum, isolating it in a way that makes it strange and compelling.

RE: Absolutely. Selection is editing. In a way it’s the opposite of chance.  All intention. I used to think of myself as a kind of stock photographer. Making an inventory of images from which I would select.

DC: Yes, few of your images seem chancy, although maybe never entirely conscious. Chance comes into the equation through the putting together of the different images.

RE: Right. A good accident is better than a bad intention!

DC: Do you make your images on a case-by-case basis, on their own terms as pictures, or are you also thinking at that early stage about how they might work together

RE: For the last few years I have made images for exhibition that are in the service of a theme or maybe it’s better to say a plan.  But there is almost always an image that wasn’t intended to be part of an exhibition or publication, something created for an editorial, or more recently with the iPhone, that is brought in to the group.  In fact my current book/show is about 1/3 to a half images I made with my iPhone, often times with the thought in the back of my mind that maybe I’ll post this to Instagram.  In this way Instagram thinking has generated a new inventory for me to select from and repurpose as an image in a layout or on the wall.  I would love to say that it was all serendipity and grace but the truth is I’m conscious of the relationships and sometimes I know before start laying it out what will work together.  Other times I’m thoroughly surprised by those chance or unintended juxtapositions or sequences.