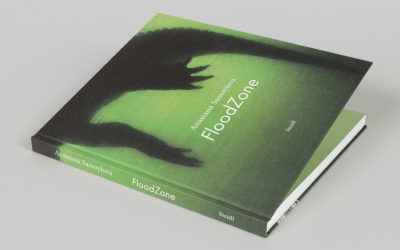 A version of  ‘Coming Waters’, my text written for the book, was published by The New Yorker, August 18, 2019, as ‘Life in Miami on the Knife’s Edge of Climate Change’:

Silvery waves slosh at the ornate jetty of Vizcaya, a Renaissance-style museum on Miami’s Biscayne Bay. They spill gently over the patterned deck and spread around the feet of a woman with a camera. The sea is coming. Perhaps not today, but it is coming. In the lush surrounding gardens, the neck of a carved stone swan was broken by Hurricane Irma. A minor loss, given the many lives taken by the water and wind as they swept in from the southeast.

When a hurricane approaches, the air tingles. The sea does strange things. In minutes, the sky can turn from azure blue to slate gray. Turbulence comes out of nowhere. You can picture what follows, and many photographers do, but you will find no images of catastrophe in Anastasia Samoylova’s “FloodZone.” She is looking for other things, the subtler signs of what awaits the populations that cluster along shorelines. What is it to live day by day on a climatic knife’s edge? What psychological state does it demand? Hurricanes are sudden and violent; sea-level rise is insidious and creeping. The low-level dread of slow change, and the shock of sudden extremes. Climate and weather.

Miami is raising some of its roads and sidewalks, hoping a few feet will be enough, but enough for what? Enough to keep next season’s tourists from going elsewhere? Enough to assure citizens that matters are under control? There are serious concerns that the limited fresh water is turning salty. Mostly the place carries on, as do most of America’s coastal states, knowing what is coming yet unable, or unwilling, to change. Is disaster more easily imaginable than the painful steps that might avert it? Yes, is the horrifying answer. Disaster will come of us doing nothing, while the painful steps would—will—have to be taken actively, and by us all. A poverty of imagination may be our biggest challenge.

Off of Florida’s western coast is Cape Romano, and off of Cape Romano is a cluster of concrete domes that were once a house. The folly of a man who got rich through oil, it stood on the beach, a beacon of futuristic paradise. But the shoreline is retreating and the house has been sacrificed to the waves. Irma took out one of the domes and the others lean precariously, like an abandoned set from a dystopian movie. On other shores, luxury apartments are under construction. Each is wrapped in computer-generated renderings of how it will look when complete. The images are shiny and bogus, but the buildings they promise will be no more real. They are the bland aspirations of a footloose global élite. Like their future occupants, the towers have little foundation in the past and even less interest in the future. They are the perfect mirage of a permanent present, a phantom beauty to be enjoyed before the economy, or the water, washes it all away.

In the heat and humidity, nature has the same accelerated blindness. Growth, death, rot, and renewal. Plants sprout from dissolving plasterwork and concrete. Manatees appear at unexpected times and places, super sensitive to changes in the water. Alligators cross roads and iguanas swarm sea walls. This was never a place of boundaries. Seeing it from above, it is clear that the line between land and water was always sketchy, a war of reclamation and loss, fought against the odds. There is something very American in the stubborn will to build cities here, and something equally American in continuing to be stubborn in the face of change.

Life lived in this kind of place brings gnawing, low-level unease. Perhaps that is what paradise always was: the fantasy of a place beyond events, beyond trouble. But escape is its own trap. While our desire for paradise is an attempt to flee some inner turmoil, the lands we call paradise are so often in turmoil themselves. What keeps the dream going is the sumptuous allure of it all. The light and the heat. The shimmer of every shade of wet green. Those pastel pinks that mold and mottle, from forced happiness to sweet melancholy. The tropical palette is here in these photographs, but not as expected. The languorous playground of expensive leisure is here, too, but it is nightmarish.

Paradise is as photogenic as catastrophe. Most often, photographers do not capture either, but are captured by them. Clichés await the unthinking. But how is dread to be pictured? Or anxiety? Or the bitterness of depthless beauty? One can try to avoid the clichés, or one can push through them and emerge on the other side. This seems to be Samoylova’s approach. Her task is first to understand the seductive contradiction of a place drowning in its own mythical images as it also drowns in water. She knows what this place looks like, and knows the Faustian pact it has made with its own image. She looks at both unblinkingly.

Walker Evans once implored, “Stare. It is the way to educate your eye, and more. Stare, pry, listen, eavesdrop. Die knowing something. You are not here long.” It’s true. We are not here long, but neither is the familiar world. Yes, there are certainly things to learn about this place from these images, but in the end photographs are not such good messengers. They bring us too many riches. They pose too many questions they cannot answer, washing like waves around our feet.