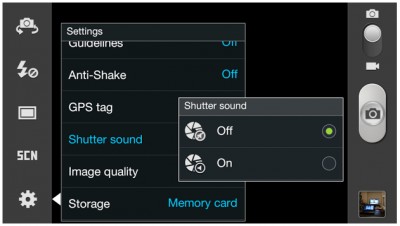 A short text written for Source magazine’s special issue on sound and photography:

It is a truism, a cliché even, that photography is mute, and strictly speaking there is no audio equivalent of the frozen image. Recorded sound is continuous, whereas photography, even in the form of a movie made up of frames, is not.  But photography does have a sonic accompaniment.  It seems probable that we learn how photography is supposed to sound in parallel with learning how it is supposed to look. At an early age television and cinema told us so. How many times have we heard a swelling chorus of paparazzi clicks and flashbulb pops that signal the arrival of the star at a movie premiere? Or the staccato of motor-drive click-whirrs accompanying a series of freeze-frames, signalling that the person on screen is being photographically observed by a detective or voyeur? Or a symbolic single click, maybe with a slight echo for effect, when a famous news image suddenly appears in a TV documentary about ‘great photography’? An impoverished mother and her children look pensive… click; a man leaps a puddle… click; a man recoils from a bullet… click. Never mind that the Leica camera that took many of those shots was so prized because its shutter was unobtrusively quiet.

So ingrained is the audio accompaniment to picture taking that our digital cameras and mobile phones are programmed to mimic those same sounds, as if it could not really be photography without them. As if we could not tell if we had actually taken a picture without some audible confirmation. I suspect that just as our vision intensifies at the moment we take a photograph, so does our hearing. We listen for the reassuring sound, real or synthetic, that says: “Yes, the shutter did open. Rays did pass through the lens to hit the light sensitive surface. Something was preserved, silently.” Before we have even seen the image, the sound is the first proof we get. If it happened in total silence would we trust it had happened at all?